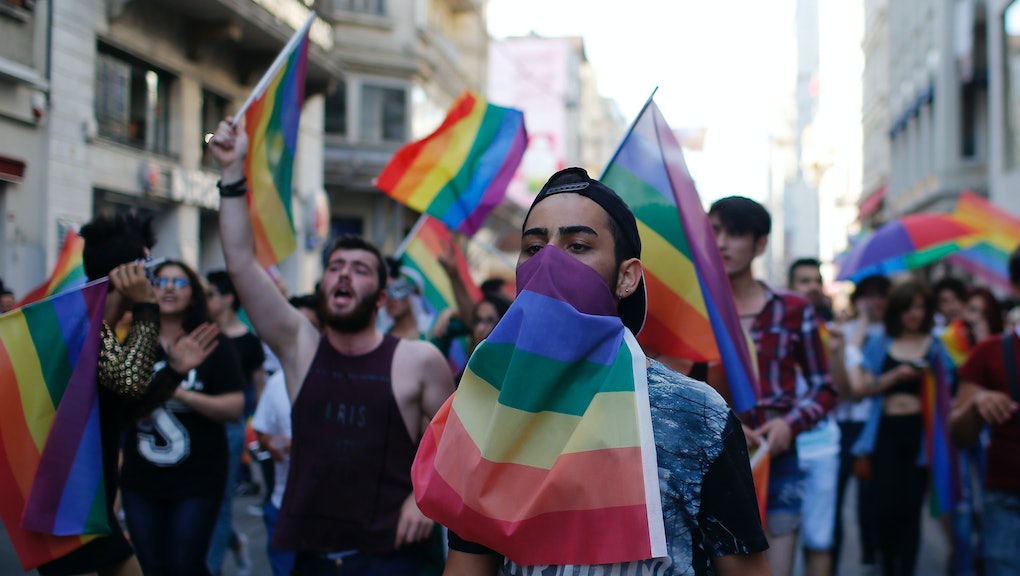 This is the second year in a row the march has been canceled.

According to Reuters, ultra-nationalist group Alperen Hearths threatened to stop the march if authorities didn't act. The governor's office responded by cancelling the event.

Prior to the cancellation, NPR reported a spokesman for a right-wing nationalist group said, "If the state lets them march, we will stop them. Wherever region they try to walk, we will not let them pass. If they have a right to be on the streets, then it's our right too."

As of Saturday, organizers of the march are still discussing how to address the cancellation. Last year, after the government canceled the parade, police unleashed tear gas at activists who tried to hold their gathering anyway. They also arrested 19 marchers.

According to Reuters, the parade has been largely peaceful since it began in 2003. However, in the last few years, organizers have run into trouble because the pride celebration coincides with the holy month of Ramadan.

LGBTQ people throughout the Middle East, but especially from countries like Iraq and Syria, have fled to Istanbul to escape persecution. Though the community is more tolerated in Turkey, where homosexuality has been legal since 1858, acceptance and safety are two different concerns.

Turkish President Recep Tayyip Erdogan has described homosexuality as "contrary to the nature of Islam," according to NBC News. Several LGBTQ candidates have run for elected office in the last year hoping to advance LGBTQ rights in a country that is experiencing a conservative resurgence.

While there is no legal precedent against homosexuality, the country as a whole seems to carry a negative view of gay people. According to NBC News, references to gay culture are often wiped from American television programming before it is transported to Turkey, and the 2014 World Values Survey found that 85% of Turks say they would not like to have gay neighbors.

Andrew Gardner, Amnesty International's researcher on Turkey, told NBC News that there has "never been a golden age for LGBT rights in Turkey."

"The idea of Turkish masculinity and national identity are as important as religion," Gardner said. "If you look into civil society there are Muslims who take a very positive stance [on gay rights] and also secular people who take a very negative stance. The idea that religion is the dividing line just doesn't work."