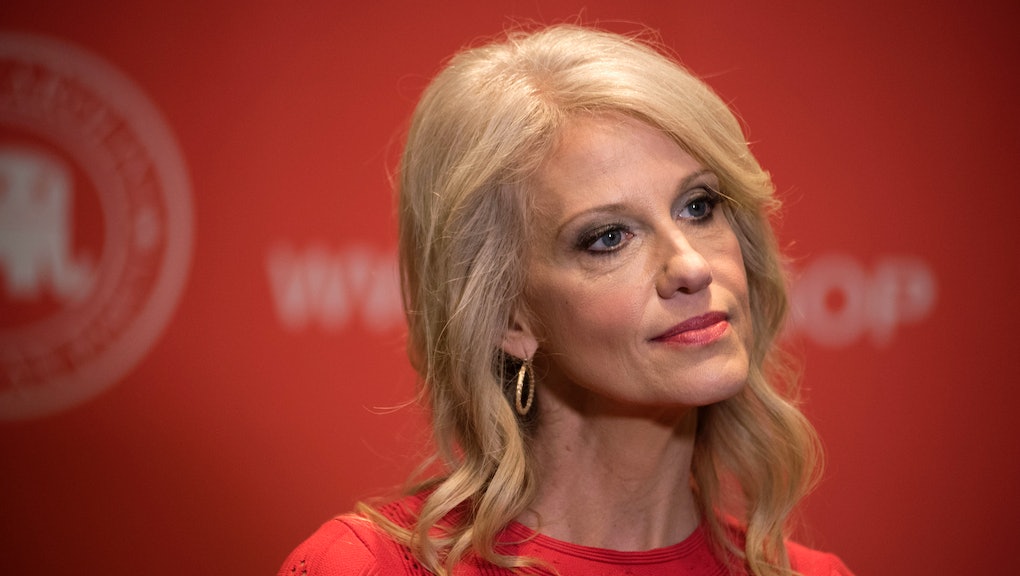 Kellyanne Conway has some words of comfort for those concerned about the looming threat of deep cuts to Medicaid.

Appearing on ABC's This Week on Sunday, Donald Trump's adviser assured anchor George Stephanopoulos that the projected $800 billion the Affordable Care Act repeal could divert from the federal aid program is not what it seems.

"These are not cuts to Medicaid, George," Conway said. "This slows the rate for the future and it allows governors more flexibility with Medicaid dollars because they're closest to the people in need."

Those people, Conway said, were "the poor, the sick, the needy, the disabled, children, some elderly, women — particularly pregnant women. We are trying to get Medicaid back to its original mores."

All versions of the Republican-backed health care plan, colloquially dubbed Trumpcare, have been projected to funnel federal dollars away from each of the groups Conway named, such that as many as 24 million people could lose insurance coverage by 2021 if the ACA is repealed. The Senate's iteration, however, looks to be particularly harsh because its Medicaid restrictions work over time, making less money available for elder and disability care in coming years.

Like the House plan before it, the Senate plan eliminates the ACA's coverage requirements for "Essential Health Benefits," meaning people who require pricey treatment courses for cancer; or maternal and newborn care; hospitalization; even pediatric services could be priced out of the market.

For everyone Conway mentioned, the future looks grim under the Senate's health care plan.

But it's the poor whom Conway most aggressively discounts. She explained to Stephanopoulos that the ACA had expanded Medicaid access to "able-bodied Americans" living "way above the poverty line." They "should at least see if there are other options for them," Conway explained.

"If they're able-bodied, and they want to work, then they'll have employer-sponsored benefits like you and I do," Conway said.

Medicaid expansion extended benefits to people living at or below 138% of the federal poverty line — which, according to the Henry J. Kaiser Family Foundation, translated to $27,821 for a family of three in 2016. As the Huffington Post reported, those 31 states that opted into Medicaid expansion would likely have to scale back their coverage under the Senate's plan.

That's unfortunate, because finding a job with health care benefits is not as easy as Conway makes it sound. According to the KFF, just 30% of workers at the federal poverty level were insured through their employers in 2014, and across all income brackets, employers have become less likely to offer health insurance over the past 15 years.

Nearly eight in 10 people on Medicaid belong to families in which someone works, and most of these people have jobs. The problem is that finding a job with benefits is not as simple as wanting one, and if it were, fewer people would require government assistance in the first place.