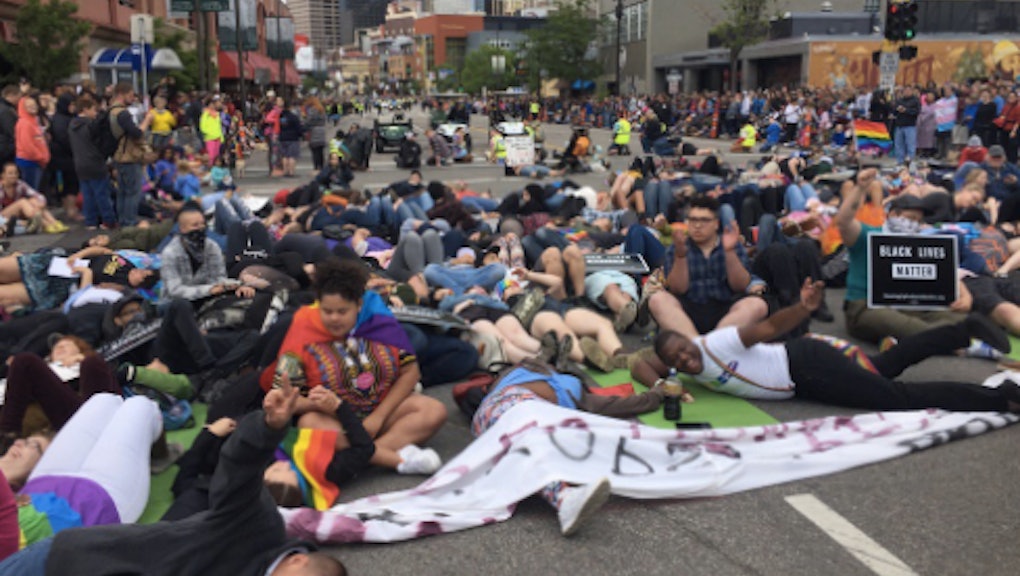 Activists from the Movement for Black Lives took to the streets of Minneapolis Sunday to disrupt the city's celebration of LGBTQ Pride in act of protest against the June acquittal of Officer Jeronimo Yanez, who fatally shot Philando Castile in July 2016.

The protesters, who held signs with messages like "No KKKops at Pride," said the Minneapolis celebration of LGBTQ Pride "[ignored] the trauma" caused to the black community by the jury that found Yanez not guilty of second-degree manslaughter, according to HuffPost.

Chanting "no justice, no Pride" and "no racist Pride today," the protesters demanded that Minneapolis Pride organizers remove the involvement of law enforcement from all their future events, CBS Minnesota reported.

Yanez's fatal shooting of Castile, a 32-year old black man, made national headlines last year as Castile's girlfriend, Diamond Reynolds, broadcast the aftermath of the encounter on Facebook Live. Reynolds' graphic video shows Castile lying bloody next to her in their car as Reynolds cries out in horror that the officer killed her boyfriend.

A video made available to the public Wednesday shows Reynolds' daughter attempting to keep her mother calm amidst the chaos around them.

"Mom, please stop cussing and screaming ’cause I don’t want you to get shooted," Reynolds' daughter said to her mother. "I can keep you safe."

Officer Yanez avoided up to 10 years in prison. The jury that acquitted him was mostly white.

Though Pride organizers rely heavily upon local law enforcement to maintain order at their functions, the event, which is celebrated annually in June in many cities in America, commemorates the anniversary of a 1969 clash between queer people and police that began the modern gay rights movement in America.