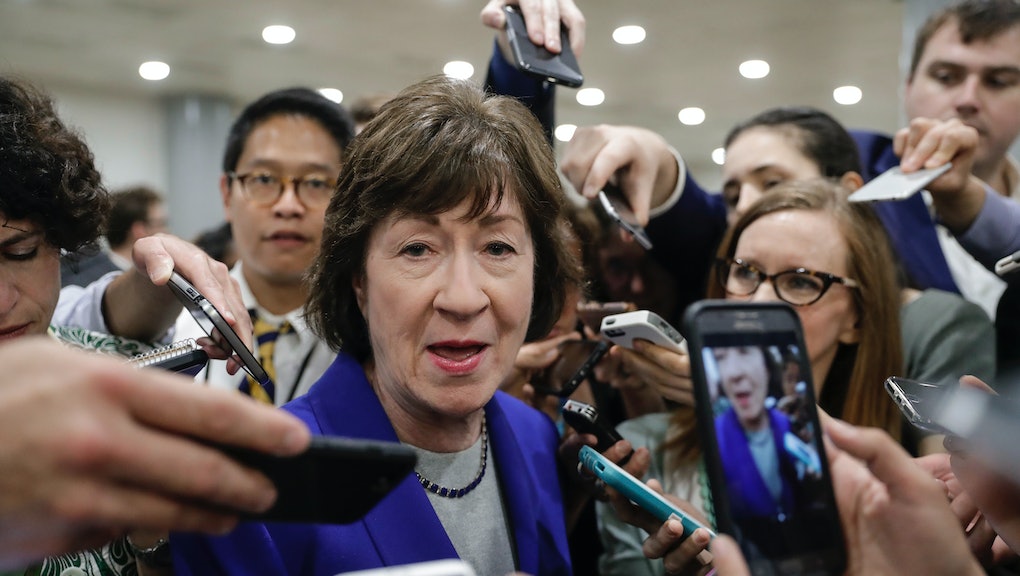 Moderate Republicans say they won't cut health insurance. But all the GOP proposals do just that.

This is Mic's daily read on Donald Trump's America. Welcome to the political newsletter that wants you to follow health care developments closely this week. There will be many... Want to receive this as a daily email in your inbox? Subscribe here.

Since the Senate health care bill was unveiled last week, moderate Republicans skeptical of the proposal have used the same message to justify their "very serious concerns:” the words key-vote Sen. Susan Collins (R-Maine) chose Sunday. Collins and her fellow skeptics cite as unpalatable the loss of insurance for millions of people if deep cuts are made to Medicaid.

Sen. Lisa Murkowski (R-Alaska) is concerned about cutting the federal funds that enabled Medicaid expansion. "You have to protect Medicaid expansion states," said Sen. Dean Heller (R-Nev.) on Friday as he came out against the bill.

This public critique comes as some argue these Republicans are lining up for giveaways from Senate Majority Leader Mitch McConnell (R-Ky.), the bill's champion, to justify changing their tune to support the bill.

The problem for these senators: “I can’t support a bill that is going to result in tens of millions of people losing their health insurance," Collins said on Thursday. Every Republican health care proposal thus far has been estimated to cause millions of people to lose insurance. The bill passed by the House would cut coverage for more than 20 million people. The Senate bill would make even deeper cuts to Medicaid.

Unless major changes to the Senate bill preserve existing insurance coverage, any successful version of this proposal will still lead to millions of people losing insurance — and these moderate senators going back on their word. Those losses will be particularly acute for people on Medicaid.

Stay tuned to see whether these moderates claim enough changes to support the final bill. Meanwhile, Trump says he wants the same thing. On Sunday, the president admitted in a Fox and Friends interview he called the House bill "mean" and wants the Senate to pass a bill that preserves insurance gains.

Today's question: Are you expecting hypocrisy from Republican moderates this week? Or will they stand their ground on no insurance cuts? Email us at trumpsamerica@mic.com.

Today: All eyes are on the battle over the Republican health care bill.

More: Watch today for the Congressional Budget Office score on the Senate proposal. If Republicans flee in droves, it's bad news for Mitch McConnell.

McConnell wants a vote this week. Five senators have come out publicly against the bill, like Heller and Sen. Rand Paul (R-Ky.), while several others are skeptical but not outright opposed, like Collins and Murkowski. Sen. Bill Cassidy (R-La.) said Sunday he is "undecided." Sen. Ron Johnson (R-Wis.), an opponent, trashed the bill in the New York Times.

The challenge for McConnell comes in placating both moderates and conservatives. With 52 Republican senators, he can only afford two defections. (Vice President Mike Pence would break a tie.) Getting Paul, the chief conservative opponent, and Heller, who wants Medicaid gains preserved, to vote yes on the same bill looks unlikely. The problem: There's too many Pauls and Hellers.

If this clears the Senate, it still has to pass the House. The House Freedom Caucus, a group of about 30 staunchly conservative Republicans, memorably pushed the House-passed health care bill to the right earlier this year. With moderates already balking at the Senate bill, could they get reach an agreement with Collins and Heller?

Key senators will feel the heat. The Democratic party, progressives and health care groups are spending millions of dollars this week to target the key swing votes in the health care fight. Read more here.

Sergey Kislyak, Russia's controversial ambassador to the U.S., is being recalled.

With the Senate focused on health care, Trump is pushing "Energy Week" to tout American energy "dominance." He'll stress that in today's meeting with Modi, India's PM, in Washington.

In two opposing Washington, D.C., rallies on Sunday, a splintered alt-right battled over whether the movement should push white nationalism or conservative freedom of speech — and there’s no love lost between the two sides.