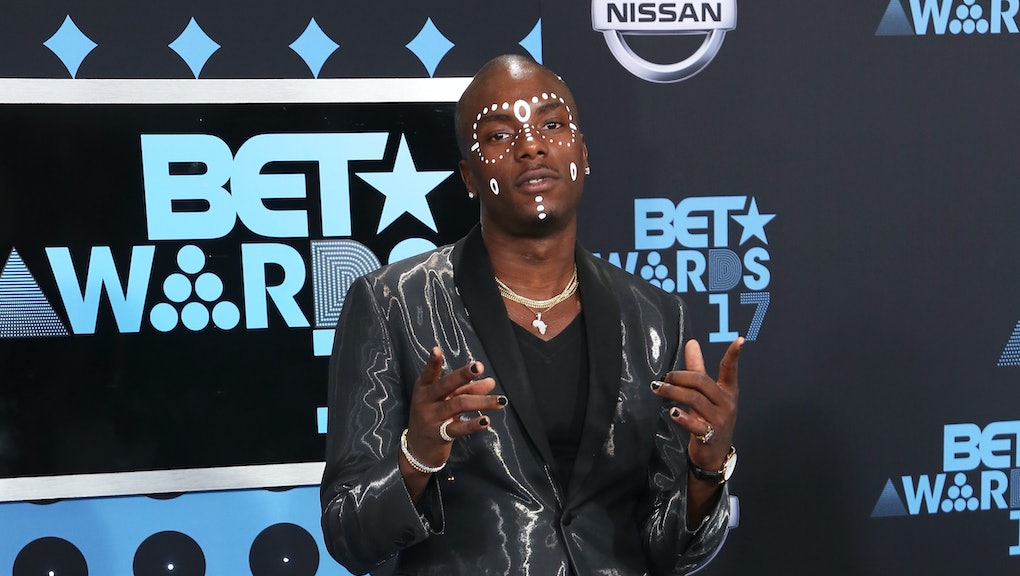 Young Paris, a musician specializing in Afro-centric beats and signed to Jay Z's label Roc Nation, is a man who you'd see once and never forget. For proof of this, take a look at him Sunday night at the BET Awards and you can already tell that the man takes fashion seriously.

There's the shiny silver suit, the multiple necklaces, the nail polish and the elaborate, beautiful white face paint design, which Paris calls his maquillage and which stems from his African heritage.

This keen attention to detail is probably why fashion loves him so much. in 2016, he attended New York Fashion Week for the very first time and he's already been named an ambassador for 2017 NYFW: Men's, which begins July 10 in New York City. He'd ultimately like to see more diversity and appreciation of different cultures at fashion week.

"It’s exciting. The year before, I kind of just went on my style and influence," Young Paris said in an interview. "For me it's cool to know that we have the platform, but I do want to use it to highlight the African style in fashion, and showing other people and designers how to really appreciate that aesthetic."

Being born in France to Congo-born parents, and then raised in New York City, Paris' entire aesthetic is about blending the cultures he holds most dear.

"What's really cool about my style is that it's always changing," Paris said. "I can do street style to luxury, from spring to summer to fall. But I have some staples, like the face paint."

According to Paris, he started wearing his signature design after his father died in 2012.

"When I lost my father in 2012, I started wearing the white and this pattern he showed me when I was young," Paris said. "The white [color] is meant to symbolize those we've lost, and it's a way to pay homage to them. It's like a symbol of rebirth and the reminders of the spirit. It's a reminder of my culture, and my father and showing the beauty of being an African."

Paris' own passion for showing the beauty of being an African is what led him to create his own company Melanin, which stemmed from a hashtag, #MelaninMonday. That hashtag, which Paris used for the first time a few years ago, was all about people sharing pictures of themselves, showcasing the beauty of people of color.

"It's really about giving people of color a platform to embrace and highlight how beautiful they are and how the sun becomes a catalyst of approval," Paris said. "Growing up, being black in America and even the world, there's a lot of oppression that can come with a skin color."

Given Paris' interest in seeing people of color shine not only online but in fashion, of course what he ultimately hopes to see at NYFW: Men's is a variety of people and styles that push the envelope, as he does almost every day.

"I like seeing what America looks like," Paris said. "I like seeing different races and sizes and different ideas. I just like being in a room and feeling like everyone is getting a piece of the pie. And I think that's where the world is going and what people are aiming for. It's definitely going to happen."