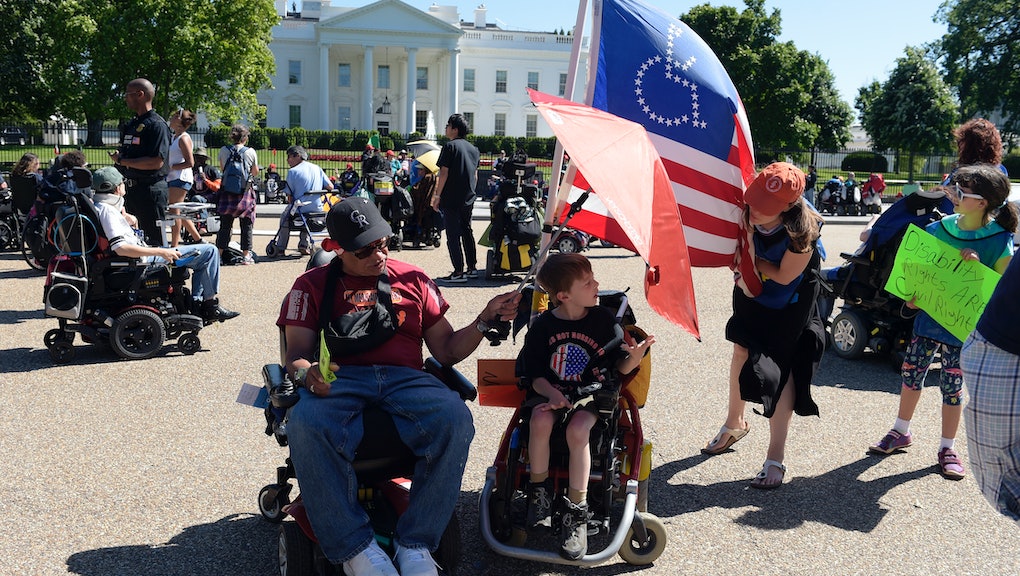 As Republicans in the Senate work to pass their recently unveiled health care bill, activists are organizing to stop what they see as an attack on lives of people with disabilities.

The core problem that advocates have with the bill are its deep cuts to Medicaid, a program best known for providing health care to low-income people, but one which the disabled community also greatly relies upon.

"Medicaid is by far the primary form of health insurance used by people with disabilities," Colin Killick, a strategist with the political action committee Disability Action for America, said in an interview. "This bill is an attack on independence."

Killick believes that the way Medicaid helps the disabled community is often fundamentally overlooked or misunderstood. "There’s a stereotype about programs like Medicaid, that they exist because people are lazy, that people are poor because they don’t want to work and it’s giving things to people that don’t want to work," he said. "In fact, the reverse is true. For people with disabilities, Medicaid is what lets us be independent — lets us work, lets us volunteer and go to religious services and be part of our communities."

The Senate health care bill makes drastic long-term cuts to federal support for Medicaid, forcing states to roll back care under the program. According to a 2015 report from the Kaiser Family Foundation, 42% of all Medicaid spending goes toward care for people with disabilities.

"The disability community is extremely concerned that the inevitable result of these cuts would be that disabled people would be very likely to see massive reductions in care because we are the highest cost populations in Medicaid," Killick said.

Of particular concern to Killick and other advocates are the potential cuts to home health aide services people with disabilities receive under Medicaid. Killick says that those programs "allow people to be independent and stay in their homes" instead of winding up in institutions or without any support whatsoever.

"Though I'm quite disabled, Medicaid services allow me to live a full, productive life," Medicaid recipient Mike Phillips said in an interview with MSNBC. Phillips, who lives with spinal muscular atrophy, spoke about his condition with the assistance of a voice synthesizer.

"I live at home. I have a personal care assistant," Phillips said in the sit-down. "I'm not exactly Ryan Gosling, but I lead a good life. Losing Medicaid — being forced into an institution — I'd lose everything."

This is not the first time the disabled community has had to fight for recognition in the halls of Congress. In 1990, legislators in Washington passed the Americans with Disabilities Act, a landmark piece of legislation that dramatically increased accessibility for America's disabled community.

Now disability rights advocates are making their voices heard once more. On the day the Senate health care bill was unveiled, 43 disability advocates were arrested outside Senate Majority Leader Mitch McConnell's (R-Ky.) office. Protesters climbed out of wheelchairs and laid themselves on the floor in front of the office.

Several individuals in were unceremoniously carried out of the building by Capitol Police.

As Republican senators continue to try and fast-track the legislation, people with disabilities are sharing their stories online using the hashtag #MyMedicaidMatters. They hope to send a message to Washington before it's too late.