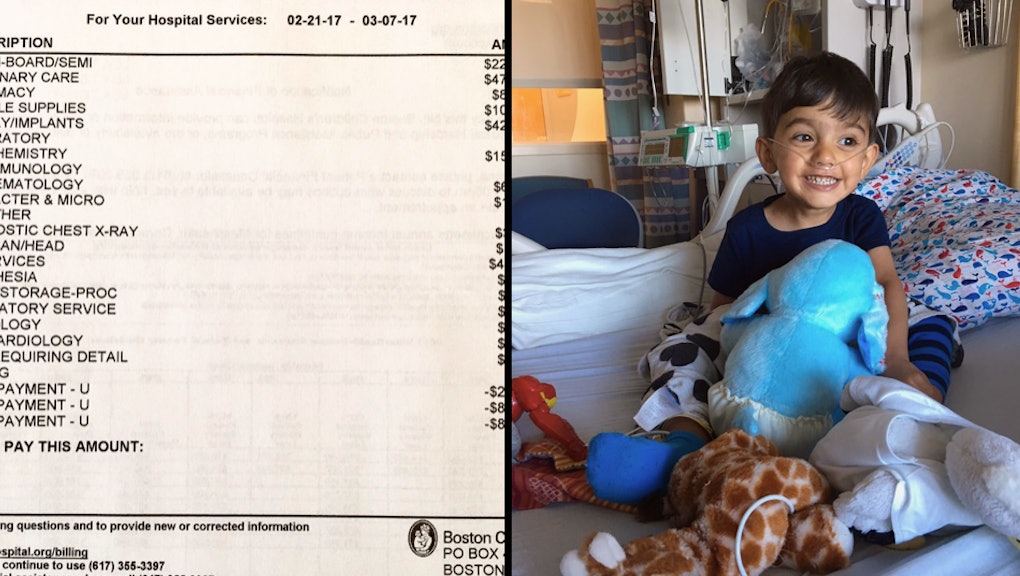 Alison Chandra never expected to go viral for tweeting about her son's medical bills — in fact, she never expected to be the mother of a child who needed so much medical care in the first place. But, with one viral tweetstorm she made it clear just how important the Affordable Care Act is to so many families.

On Friday, the New Jersey mom of two tweeted an image of a bill she had recently received for her son Ethan's open-heart surgery. The total costs were more than $230,000, she said — but after insurance, her family owed just $500 for the surgery and care.

If the GOP health care bill passes and the ACA is repealed, Chandra fears that her son's medical care could quickly become unaffordable, leaving her two-year-old son without the coverage he'll need for the rest of his life.

Chandra's son was diagnosed prenatally with a condition called heterotaxy syndrome, a rare genetic disorder that means that his organs weren't formed correctly.

Even before he was born, Ethan needed immediate care, Chandra said in a phone call on Monday. Without adequate health insurance, she said, "even my pregnancy would have bankrupted us. … The costs were astronomical." Ethan had his first surgery when he was just six days old.

Since then, Ethan has required near-constant medical treatments. Chandra said on Twitter that his care "blew past the million dollar mark long ago." He takes multiple prescription medications, requires frequent trips to the emergency room and will need similarly expensive care for the rest of his life.

But thanks to his care, he's been able to grow into a typical toddler. Ethan turns three on Saturday, Chandra said. He loves animals, snuggling and hiking — something he wasn't able to do before his February heart surgery.

Yet still, Ethan "will always have medical costs," Chandra said. "There’s no cure for heterotaxy."

If the ACA is repealed and the new Republican health care bill is put into place, millions of people with employer-provided health insurance, like the Chandra family, could again face lifetime limits on their coverage costs. If those limits are reinstated, Chandra said, Ethan would likely lose coverage.

Chandra said that in sharing Ethan's story, she hopes that more people will consider that every American is just "one life event away" from becoming someone who needs insurance to cover hundreds of thousands of dollars in expensive medical care.

Before Ethan's diagnosis, Chandra said, "I thought that other people got sick. ... I thought that we were invincible and we would never need millions of dollars of medical care for our child."

But now, Chandra said, she's sharing Ethan's story in the hopes that people consider kids like him in the health care debate.

"Our kids are real, and their stories are real," she said. "If I can get people talking, if I can get people to realize that there are names and faces and actual living, breathing human beings, not just political bargaining chips, then maybe we can change the discourse. ... We need to actually all come together and demand a bill that is better for all of us."