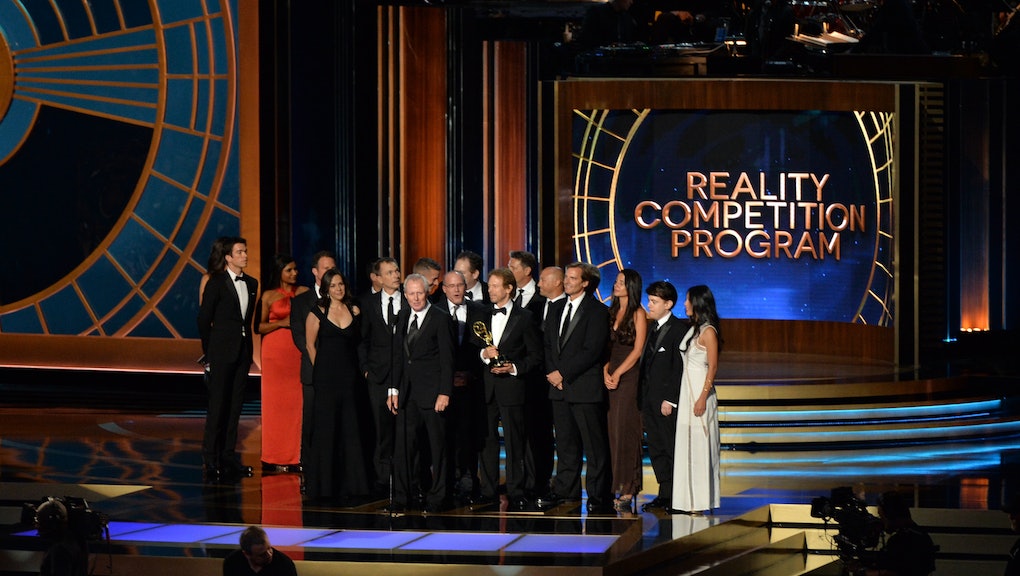 The best reality competition at the Emmys needs a face-lift

Of all the categories at the Primetime Emmys, none is quite as boring as best reality competition. Sure, there are some technical categories with less buzzy names that are relegated to the Primetime Creative Arts Emmys a week before the main show. But even those vary up their nominees pretty regularly, and if you care enough to pay attention, you’ll find that the voting body does recognize remarkable craft: Crazy Ex-Girlfriend for best choreography! The People vs. O.J. Simpson: American Crime Story for best casting!

Reality competition series, on the other hand, is dull as dishwater; a staid category that sees the same nominees facing off year after year. Most times, The Amazing Race wins; when it doesn't, The Voice does. (Top Chef is the only other show to win in the category's 14-year history.) Dancing With the Stars has been nominated every year since its inception, while Project Runway has racked up a staggering 12 nods for 14 seasons.

Say what you will about those shows, but there's no way they've been so uniformly excellent — head and shoulders above their competition — every year of the past 14. The fact that such a small group of shows gets nominated over and over again is a clear sign that the voting body lacks imagination when it comes to this particular category. If the same sort of repetition happened in the drama or comedy categories for this long, critics and viewers alike would riot. (When Modern Family kept winning the best comedy Emmy, there was much chagrin.)

Because it's the reality genre, though, this stagnation goes on relatively unchallenged. What we do get is piece after piece calling time of death on reality TV. Of course, as evidenced by the fact that TV critics have been saying that for years, it's clearly not dying — at least not at any rapid pace. The solution isn't to continue gazing at the clock, tapping our feet and hoping for an end; it's to change the way we talk about reality TV.

For starters, we could reward and lift up a different crop of shows — and why not start with this year’s Emmys? As long as the Television Academy continues to treat this genre as a triviality, the great examples of reality competition will keep getting ignored. One of the youngest skewing categories at the Emmys already feels terribly old.

Ahead of the upcoming 69th Annual Emmy Awards nominations, we've put together a list of six outstanding reality competitions. Only one is a regular nominee, but they all have something special and new to offer the tired category. If voters' picks are half as ambitious as these, we may see a new choice for America’s Next Top Reality TV Competition.

Just when you think a show is dead, it comes back stronger than ever. America's Next Top Model was ripped from the jaws of cancellation after 22 cycles on the CW by VH1, bringing it back with a new panel of judges and an old-school format. No more boys vs. girls or special gimmicks. (Remember the short-girls season?) VH1 managed to modernize ANTM while stripping it down to its roots as a no-frills, all-drama modeling competition. Is there any wonder executive producer Tyra Banks wanted her host's chair back so fast?

It’s absurd that one of the most compelling, long-running reality game shows has never been nominated in this category. What started as a spin-off for recycling Real World and Road Rules talent 30 seasons ago has evolved into a powerhouse program of its own, with returning cast members that support their own storylines across multiple seasons (i.e. CT Tamburello’s relationship with fellow contestant Diem Brown, who died after a battle with ovarian cancer in 2014). As a pure feat of production, The Challenge deserves attention.

Who can possibly resist this delicious dollop of delight? The Great British Baking Show, a retitled version of the U.K.'s Great British Bake-Off, has been airing on PBS for four seasons now without notice from voters in this category. Crucially, because Bake-Off (a registered trademark in the United States) suffered a dismantling of its judging and hosting panel last year, this is one of the Emmys' last chances to reward the original incarnation of the show. If Mary Berry's delightful presence can't win it a nod, nothing will.

Of all the shows on this list, this is the one I'm the most shocked the Emmys have never nominated. It's culinary catnip: Cute kids with remarkable talent being nurtured and mentored by reality-TV-villain-turned-sweetheart Gordon Ramsay. It's a network show, airing on Fox, which tends to be where most of the Emmys' favorite reality competitions air (save Top Chef and Project Runway).

Best of all, it's actually incredibly inspiring. The kids are never framed as losers or failures — Ramsay and the show raise them up no matter what. If voters are interested in heartwarming moments, MasterChef Junior is filled with them.

For both the photo finish-worthy season nine and the thrilling reunion battle royale that was All Stars season two, Drag Race is worthy of nominations. The former delivered some of the best bits of drama of 2017 TV so far, while the latter flipped the show’s format and delivered a nail-biter of a competition.

Technically, because All Stars is a different series, it could be nominated for both. But we'll be conservative and say that just one of television's best series should receive a nomination. Considering Ru herself was able to nab the Emmy for best reality show host in 2016, the show is clearly on voters' radars. It’s time they let it fully into their hearts and finally cast a vote for TV’s most fabulous reality series.

It only won once, but if there's any regular nominee that’s earned its fixed place in the rotation, it's Top Chef. This past season employed a rookies-vs.-veterans twist, churning out its best run in years. The winner, Brooke Williamson, won in a truly satisfying redemption story. It wouldn’t be a surprise if Top Chef nabbed a nomination, but it certainly would be if it won.