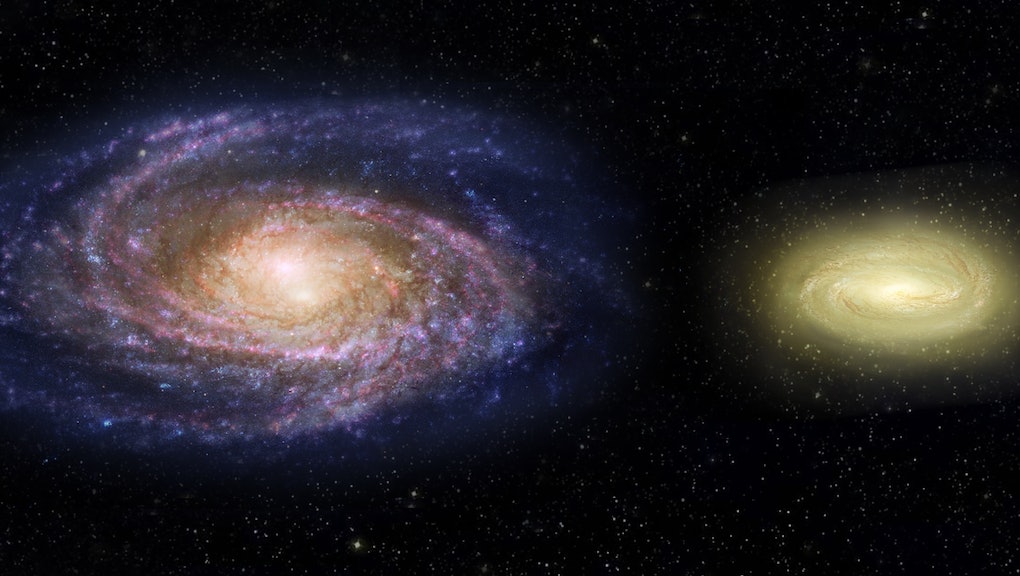 NASA's Hubble Space Telescope has made an new discovery: it found a giant galaxy located 10 billion light-years from Earth. The disk-shaped galaxy, named MACS2129-1, is categorized as a "dead" galaxy since it no longer creates stars — scientists believe star formation stopped for the fast-spinning galaxy a few billion years after the Big Bang 13.7 billion years ago.

The new galaxy is compact. For reference, it is three times heavier than the Milk Way but only half the size, according to study leader Sune Toft, an astrophysicist at Dark Cosmology Centre at the Niels Bohr Institute in Copenhagen. It also rotates a lot faster than the Milky Way.

"We were able to establish that the stars in MACS2129-1 rotate in circles around the center of the galaxy at a speed of over 500 km per second, more than twice as fast as stars rotate in the Milky Way,” Toft, who published his findings in the June 22 issue of the journal Nature, said in a statement.

What makes this finding so surprising is that it shatters what scientists had previously believed. Until now, it was accepted that there are two types of galaxies: disk-shaped spiral ones and elliptical-shaped ones. The Milky Way is one of the former, which includes active galaxies that are still making new stars, while the latter are “dead” galaxies.

With MACS2129-1, things are different since it is a dead, disk-shaped galaxy. This discovery is essential in understanding how galaxies form and evolve.

"This new insight may force us to rethink the whole cosmological context of how galaxies burn out early on and evolve into local elliptical-shaped galaxies," Toft said in a statement to NASA. "Perhaps we have been blind to the fact that early 'dead' galaxies could in fact be disks, simply because we haven't been able to resolve them."

As for what's next, Toft and his team hope to use NASA's James Webb Space Telescope — a large infrared telescope slated to launch into space in October 2018 from French Guiana — to learn more.