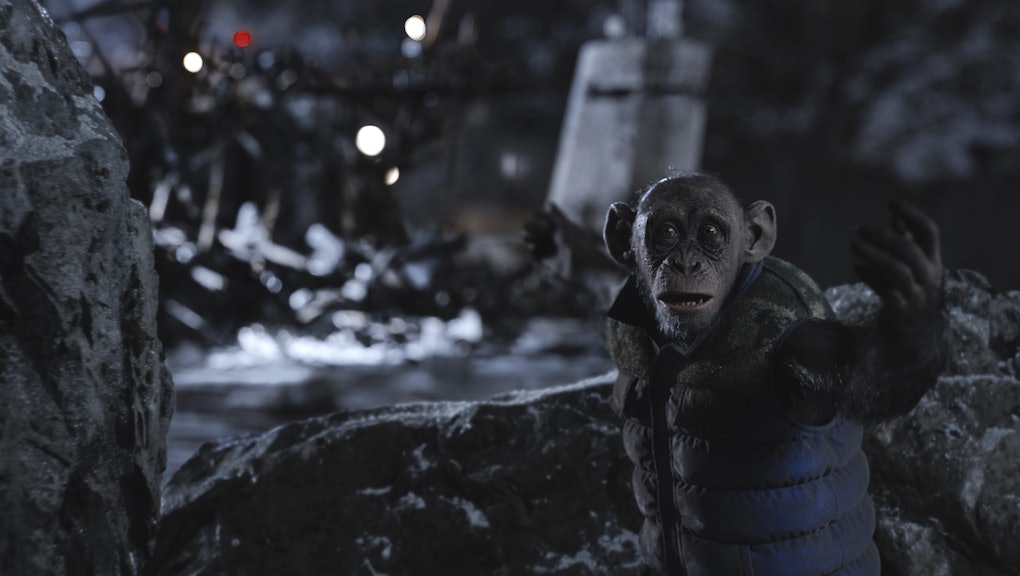 It's not often that a sequel tops an original movie, or stranger still, the third installment of a trilogy, but that's what critics are saying War for the Planet of the Apes does.

The film isn't set to hit theaters until July 14th, but according to the critics who saw it early, it's one for the books. What's more interesting however, is one resounding reason for the praise seems to be how dark and devastating the summer film turned out.

Like many other entertainment offerings this year, War for the Planet of the Apes plays into a dystopian future, only this time it affects humans and apes. There's war on a massive scale, the loss of pivotal characters and a look into the most disturbing aspects of human frailty. Suffice to say, it's not exactly an upper, but those who've seen it say it's worth enduring the painful moments.

Here's a smattering of critics' positive reviews of the latest and last installment of Planet of the Apes.

Germain Lussier of iO9 was stunned at the end of the movie for good reason, but warns it's not just a fun summer blockbuster.

It’s not supposed to be fun. War for the Planet of the Apes is supposed to make us feel. Make us hurt. Make us rejoice. And it does that in big, sweeping ways with some of the most stunning visual effects you’ve ever seen. It’s a special movie, an amazing sequel and undoubtedly one of the year’s best films.

Todd VanDerWerff of Vox thought War for the Planet of the Apes fully surpassed the previous two movies in the trilogy.

The new movie is better than both of its predecessors, a muscular, surprisingly quiet film about how the end of some things is the beginning of others. It boasts terrific, tense action sequences, but also a real, poetic sense of longing for a world long gone.

Chris Nashawaty of Entertainment Weekly was impressed by the overall story structure.

It isn’t just the look of the new films that’s been upgraded thanks to breathtaking motion capture technology, the storytelling has gotten richer and more complex, too. Like Caesar and company, the films seem to be getting more intelligent and human as they evolve.

Kyle Anderson of Nerdist felt it delivered an ending the epic trilogy deserved.

Finally, with War, we see both sides becoming increasingly desperate, leading to an examination of which species truly is the most human. It’s the absolute perfect end to this trilogy.

Alonso Duralde of the Wrap thinks the final film in the trilogy is a lesson for a trilogy-makers.

Overall, this is a trilogy that will stand as an example of how to remake and reimagine familiar material in a way that respects the original while also enhancing it.

Peter Bradshaw of the Guardian was enthralled by the movie's motion-capture prowess.

Perhaps it is absurd to attribute charisma to a character who is an amalgam of digital fabrication and flesh-and-blood reality but that is what Serkis/Caesar has: he genuinely does look like a careworn military leader, bowed by age, coarsened by violence, haunted by loss, but still physically strong and with a natural aptitude for command.

And finally, Julia Alexander of Polygon says this movie sets a definitive bar for the rest that follow it.

War for the Planet of the Apes isn't just a near perfect example of what a summer blockbuster should look like, but rather of what all films should aspire to accomplish.

When a movie is this highly recommended by some of the most esteemed critics in the business, it's worth checking out. And, based on the ground-breaking effects listed above, it's also probably worth seeing in a large theater rather than waiting for it to come out on DVD or various streaming devices.

Perhaps the most exciting aspect of these reviews is how untraditional this summer blockbuster is despite how it might look at first glance. With that in mind, it's likely War for the Planet of the Apes will do quite well at the box office this summer.