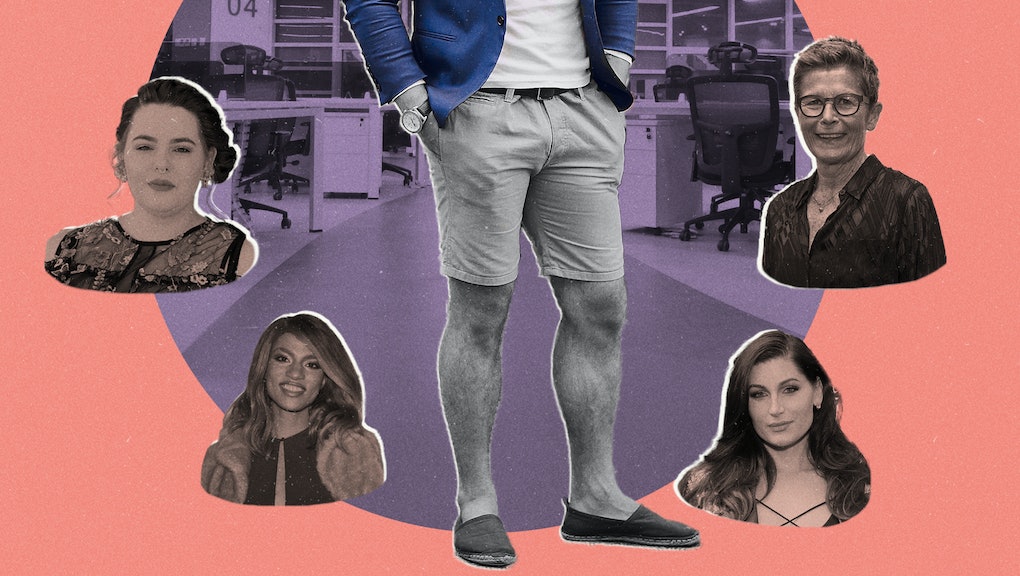 Is it ever OK for men to wear shorts in the office? We asked 25 very opinionated women.

“Are men in shorts the worst?” Vogue asked last week, unknowingly inserting itself right into the middle heated conversation surrounding whether or not men wearing shorts in the workplace is really OK. With temperatures on the rise and more men gazing enviously at women's bare, uninhibited legs, men wearing shorts to work has become a bit of a hot topic.

There was the viral moment last week when, after being sent home from work due to his shorts, a British man returned in a dress.

A few days later, dozens of schoolboys in England staged a similar protest, arriving to school in skirts after being reprimanded over their shorts.

“Children also don't like injustice. The boys see the women teachers in sandals and nice cool skirts and tops while they are wearing long trousers and shoes and the older boys have to wear blazers,” one parent explained to Devon Live. “They just think it's unfair that they can't wear shorts in this heat.”

You hear that? Injustice. Unfair.

Is men wearing shorts to work really the same thing as women wearing skirts or dresses though? To Vogue, they were already ready to deem male shorts “the worst.” To them, a man being able to wear shorts — period — hinders on his figure. “His legs better not be hideous,” one Vogue contributor weighed in. “I actually think shorter shorts are much more flattering on men, provided they have nice legs,” said another.

But men wearing formal shorts does live on, even in the pages of the New York Times, which endorsed wearing shorts to the office in 2008. Just this past week, on the cover of the Times Sunday Styles section, there was designer Thom Browne in formal shorts, surrounded by other grown men dressed in a similar fashion.

Here is what they had to say:

“Why wouldn’t it be?! Men should be able to wear whatever the hell they want. We all should.”

“Yeah! I think it’s fine. I don’t think they can wear them to legal offices, but I know that in other cooler fields. It just depends on where you work. At the same time, I don’t think women can really wear shorts to work now. So if men were allowed to and women weren’t, I know I’d be really upset.”

“Yes, definitely! As long as the look is polished, guys should be able to wear shorts at work. Especially if you work in an office with a more laid-back culture like a tech startup or creative agency. I personally like a pair of chino shorts in khaki or navy, or even a fun color like mustard or army green for summer, paired with a white button-down and loafer – classic!”

“It’s fucking hot out. It feels like someone is sitting on your chest when you walk down to the train. And everyone is always so sweaty and gross when they get in. My male coworkers have expressed many times how envious they are of the draft women get because we get to wear dresses, but it’ll never be allowed. My male coworkers also complain a lot about how they feel women are allowed to wear basically whatever they want, but they are restricted to slacks and long sleeve shirts with room for the occasional polo. Ultimately yes, I wish they were granted the freedom to wear shorts.”

“Well, in the office it’s cold, so that’s why I usually think it’s weird. Those pants they usually wear aren’t that hot. Aren’t they cotton or something? I’d say no, unless there is a casual Friday situation.”

“My answer is yes! The shorter and tighter the better. I appreciate a 1970s throwback moment. Why do men hide their physique with so many baggy clothes anyway? If we have to be objectified then they should be too.”

“Yes, though they should be mindful of length and fit, just as women should be about their dresses/skirts/shorts.”

“LET THE MEN WEAR THE SHORTS. If I’m wearing a constant rotation of adorable sundresses to deal with the summer heat these men should get the chance to cool off too!”

“At my job? Absolutely not, no. But I mean, if you’re in a more casual workplace and laid-back, then I guess it’s OK. I do think it depends on your role though. I wouldn’t want a boss or manager, for example, walking around in shorts.”

“I’m sure it’s common sense for most guys that work in finance, doctors offices, etc., who know not to even go there. Guys in a more creative ‘office’ such as media, music, or arts, I say it’s a-OK.”

“In a business-casual office setting, shorts are generally inappropriate. Nice slacks and a button up shirt and polo are really the minimum requirements. But with many offices moving towards a relaxed dress code, shorts are more acceptable. If you’re customer-facing, wearing colorful summer shorts can be acceptable based on the office dress code. Of course, unless you are in tech and do not care about social norms, please never wear baggy cargo shorts as they should never be worn by adults, in or out of the office.”

“I honestly think they’re totally not a problem at all. It’s hot out, it’s gross. Wear them if you need to! Not that many people should be staring at your legs anyway.”

“Only time I think it’d be possibly appropriate is for like a ‘casual Friday,’ but I feel like you still should stick with pants. It’s really hard to make shorts look work appropriate.”

“I think as long as they aren’t cargo or basketball shorts... and they are well tailored, why not? It’s only important if you have meetings with clients, then it’s a different story. You represent your company, which requires some professionalism.”

“No, I do not think that men should wear shorts in the workplace.  A conservative dress code (which includes long pants) encourages a more professional demeanor and a more serious atmosphere.”

“Any discussion of workplace attire depends on the office standards. What I’m about to say probably doesn’t apply to a law firm, or a government office or a financial firm. That said, if the office is more casual: Wearing shorts isn’t some crime against humanity! It’s hot out, so men’s shorts make sense, just like so many women wear shorter dresses or skirts on hot work days! It’s just about appropriateness, which admittedly is entirely subjective. If the shorts seem too casual or too thigh-baring, then avoid. Otherwise, worn in a decent length, a nice fabric and with cool shoes, men’s shorts can be totally kosher.”

“Absolutely not! Except if it is a Hawaiian party for the office. Not even in [Los Angeles] do men wear shorts to work, and I work for a very open-minded company.”

“Depends on the man, office and overall style of shorts. But in general, I’d say no. If you’re in construction, a life guard, on a shoot in the Sahara or you happen to be an underwear model, I’d say go for it. If you’re conversing with an office full of advertising professionals or closing a big business deal and you’re sporting cargo shorts, you’re not going to be taken very seriously and your taste level is going to be severely scrutinized.”

“I think it’s fine! I don’t like in January to see guys running with shorts, it’s like, do you want us to cheer for you? But I have always loved the look of a great tailored short, like Bermudas, with maybe a nice sandal. Yeah, you can wear shorts, but you have to wear a coat and tie, and maybe Birkenstocks.”

“I can’t look at a man in shorts at my office and not think he’s just a dad going on a field trip, so for me it’s a no.”

“I fucking love shorts. On men, women and children.  My office doesn’t permit shorts on anyone, but that doesn’t stop me from wearing them.  The guys in our office comply with dress code, so I don’t currently get to enjoy man shorts in the office.  But I’m down with it – show your style, honey!”

“So, I actually kind of think it’s gross. A lot depends on the shorts themselves, and also where you work obviously, but the wrong shorts on the wrong person with the wrong job and it could be a disaster.”

“I think shorts for anyone would need to have parameters for professional appearance. Daisy Dukes in the office aren’t appropriate for anyone.”

As you can see, it's a mixed bag. So maybe just ask your manager.