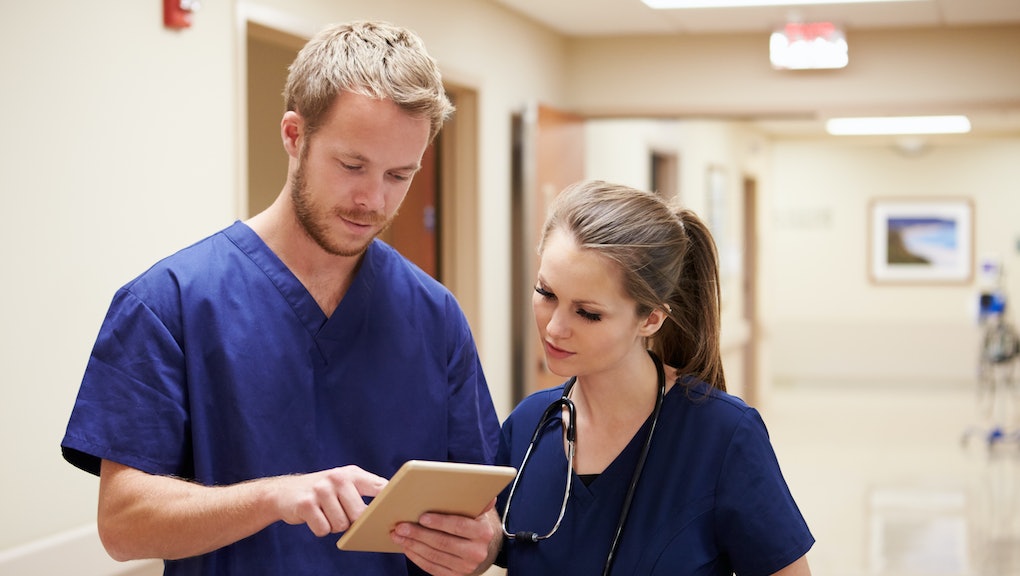 Does nursing require a "woman’s touch"? These male nurses say no.

Martin was in his second semester of college at the University of Central Florida when he realized declaring a major in marketing had been a mistake. He'd just come back from a meeting with his marketing adviser, who told him he'd have to take pre-calculus to stay on his major's track. Martin left her office and sat in the quad for an hour, thinking about how much he hated calculus and how he might have rushed into a major in UCF's business school. Then he had an idea — what if he went into nursing instead?

"I thought, 'I'm empathetic; I like taking care of people,'" Martin said in a phone interview on Monday. "My dad, who's a radiologist assistant, would always tell me, 'If you have a medical license you'll always have a job. The money's decent.' Nursing was also a profession you could practice anywhere, and traveling had always been something I wanted to do. All of those things hit me at once on the quad."

Better yet — UCF didn't require pre-calc for a nursing major.

Martin went back to his adviser's office and told her he didn't want to major in marketing anymore. He was going to study to be a nurse.

All of the benefits of a career in nursing 17-year-old Martin thought of in the quad that day still stand. But according to the New York Times, some men still aren't taking advantage of them.

The Times ran a story titled, "Men Don't Want to Be Nurses. Their Wives Agree." The piece details a pesky problem unemployed men are facing: As traditionally male jobs disappear, more traditionally female ones are opening up, forcing men to put a price on their masculinity.

"Marriages have more problems when the man is unemployed than the woman," Ofer Sharone, a sociology professor at the University of Massachusetts, Amherst, told the Times. "What does it mean for a man to take a low-paying job that’s typically associated with women? What kind of price will they pay with their friends, their lives, their wives, compared to unemployment?"

Some men have admitted to the outlet that the cost is too high.

In January, the Times published a similar story analyzing Bureau of Labor Statistics data, which revealed some men were indeed choosing unemployment over jobs in traditionally female sectors.

"I don't want it to sound bad, but I've always seen a woman in the position of a nurse or some kind of health care worker," one man, a former wielder, told the Times. "I see it as more of a woman's touch."

Martin, now 27, said these stereotypes never crossed his mind when he decided to go into nursing. He gave credit to his mother, who he said raised him without rigid ideas of gender roles.

"I think empathy is gender neutral."

Dan Douglas, a 29-year-old nursing student at the University of New Mexico said his male relatives didn't see it that way.

When he was accepted to the University of Arizona, Tuscon, for his undergraduate degree, Douglas pre-matriculated as a nursing student, following in the footsteps of his mother and aunt, who are both nurses. But a troubling conversation with men in his family the summer before he left him with some doubts.

"They said, 'You know, you really need to do something else because you’re not going to make any money as a nurse,'" Douglas remembered. "'That’s not going to be satisfying.'"

"I had really absorbed a lot of the gender bias around nursing," Douglas said. "There was this idea that, if I was going to be a nurse I might as well be a doctor, but I really didn't want to do that."

Douglas eventually got his Certified Nursing Assistant license and land a job at a local hospital.

"I immediately knew it was for me," he said.

As a gay man, Douglas said shaking off the expectations of traditional masculinity had been a part of his coming out experience that also helped prepare him for his career as a nurse. Even so, he said it was still an adjustment to attend a school where he's one of just six men studying nursing in a class of about 64. All of his professors are women, and the other men on campus often assume he's going to school to be a doctor.

Society may be slowly but surely outgrowing these stereotypes, especially as a new generation of men enter the workforce.

According to the U.S. Census Bureau's 2013 report on men in nursing, the number of registered male nurses grew from 2.7% in 1970 to 9.6% in 2011. Meanwhile, the number of licensed practical and vocational nurses grew by just 4.3% during the same period.

"We seem to be slowly making headway toward being a little more open-minded toward what exactly gender roles mean," Martin said. "Twenty years ago, I might have gotten more flak for being a nurse, but I didn’t really experience that. Hopefully that’s a good sign."