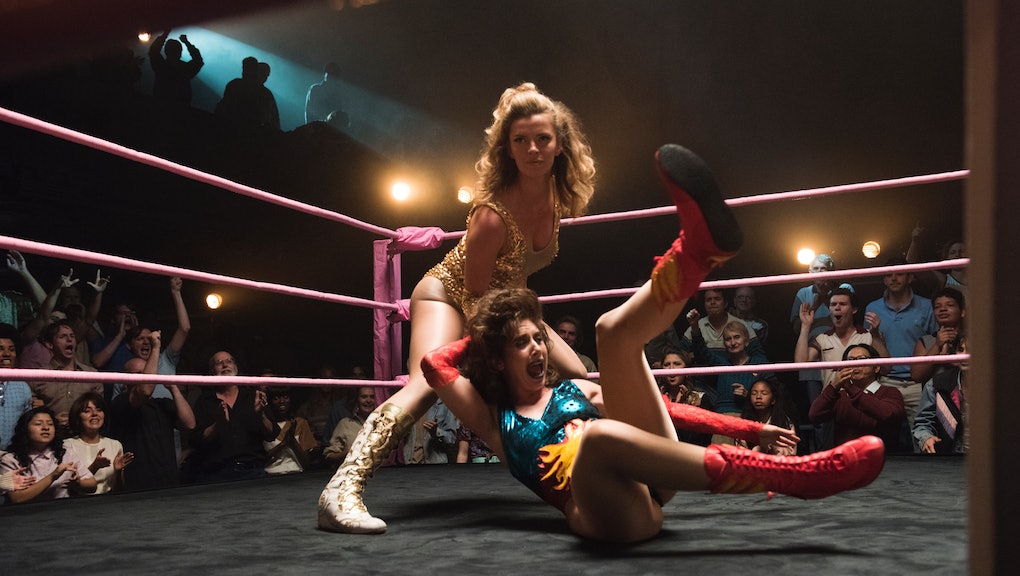 In the campy '80s TV series Glow: Gorgeous Ladies of Wrestling, wildly stereotypical characters like "Little Egypt" squared off in professional wrestling matches with patriotic heroes like "Justice" and "Babe the Farmer's Daughter." It was cheesy and offensive, but it stamped double X chromosomes on a previously male-dominated field. It also introduced young women across the country to strong female role models — and Netflix’s new comedy-drama about the program, simply titled Glow, captures that same sort of spirit.

At its core, Glow is a story about the Gorgeous Ladies of Wrestling taking creative control of their wrestling personae — and, often, their lives — despite working under the roving eye of their sexist director, Sam Sylvia, played by Marc Maron. Ruth, a struggling actress played with bright-eyed zeal by Alison Brie, shepherds our introduction to this world. But despite Brie's top billing, Ruth isn't the main conduit for the show's feminist energy.

That honor goes to Debbie Eagan, the blonde bombshell and face of the Gorgeous Ladies of Wrestling.

Played by Betty Gilpin, also of American Gods, Eagan continuously bears the brunt of the series' sexism. When she tells Sylvia she was written off a soap opera for inquiring about her character, her expressive face betrays a lifetime of bottled frustration. When she explains to her husband that her acting job is a passion — not a silly experiment — her weary eyes suggest she's defended that passion one too many times. But she never throws in the towel.

While Ruth, a genuinely talented actress, thrives in her role of “Zoya the Destroya” — a classic Russian-villain stereotype — there's not much that stands in her way. She finds fulfillment in Glow's female-led creative haven and excels there. Eagan, on the other hand, must rise above her husband's small-mindedness to shine in her starring role as “Liberty Belle.” Before she steps into the ring in season one's finale, she firmly tells her skeptical husband, "If this is too silly for you, you can leave.” As a mother to an infant, she also must work harder to reconcile her dual identities as a badass wrestler and a cookie-cutter product of ’80s femininity. More than Ruth, she embodies the strong, sexy, independent spirit of the real-life Glow series.

While Ruth — a needy, showy actress — breaks into accented monologues and theatrical asides, Gilpin's Debbie communicates much more in fewer words. Every look signals desperation or outrage, even in her brightest moments, and the roughness in her voice suggests a vat of resentment waiting to boil over. Brie is still great (her one-woman rundown of her fight choreography is a tour de force), but Gilpin often steals the show.

Until Glow premiered, Brie was the face of this series. Her previous role on Community landed her top billing, and Netflix frequently presented her as a selling point in promotional appearances. But Gilpin, with her quiet fury and wry exasperation, might be picking up that baton if the show is ever renewed. Gilpin may not be the face of the show, but she's certainly the heart of it.