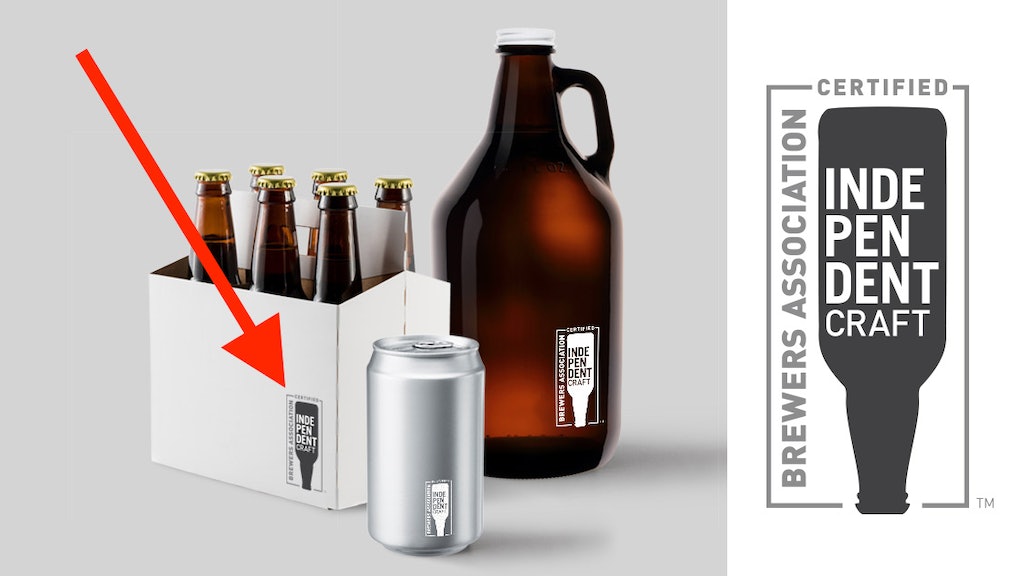 You're not supposed to judge a book by its cover, but soon, it might be smart to judge a beer by its can.

The seal depicts a beer bottle outline flipped upside down, to symbolize that small craft breweries have transformed, or "upended," the beer industry in the U.S., a press release noted.

"There’s a lot of confusion in the marketplace over which breweries are craft, independent, and which owned by big beer," Bob Pease, president and CEO of the Brewers Association, said in a phone interview, noting the seal "provides clarity on ownership." Any small and independent brewery can use the seal free of charge. Seventeen breweries, whose owners sit on the Brewer's Association board of directors, have already pledged to incorporate the seal into their branding.

"The time is ripe. Our members want something that helps differentiate them in the marketplace," Pease said. "These are businesses in your town and in your state. They’re creating jobs and hiring your friends, neighbors and other local people. Small and independent brewers are driving a renaissance of urban manufacturing."

A witty beer name or splashy label design no longer separates small and local breweries from other competitors in the beer aisle. Retailers like Walmart have attempted to capitalize on enormous consumer interest in craft beer by marketing mass-produced beer with hip names like "Cat's Away IPA." In February 2017, a lawsuit alleged the big box retailer's marketing was misleading consumers into thinking the beer was from a craft brewery.

Plus, many local favorites — like Chicago's Goose Island and Seattle's Elysian Brewing, bought by Anheuser-Busch in 2011 and 2015, respectively — have graduated from their craft origins and now have corporations backing them. But it's hard to tell when glancing at the brewery branding. The Independent Craft Brewer Seal could conceivably help beer drinkers know who's really behind their beer.

"The [seal] is simple, inoffensive and fits well on just about any label," Dave Lopez, co-founder of Gun Hill Brewing in the Bronx, New York. "But unless it becomes mandated for all independent brewers to use, I’m not totally sure it’s going to make a difference."

Lopez said he already has several labels on order, but would consider incorporating the seal into Gun Hill Brewery's branding if the icon becomes an industry practice.

Lynne Weaver, co-founder of Three Weavers Brewing in Inglewood, California, said Three Weavers supports the new Independent Craft Seal. "Based on our current bottle and can programs, Three Weavers will incorporate the new seal as design and inventory allow," she said.

Josh Bernstein, a New York City-based beer and spirits journalist, noted that the word "craft" has lost most of its original meaning, akin to "artisanal" becoming a relatively meaningless marketing term. And brewers are already moving on.

"Over the last year, I've seen the word 'independent' increasingly used in conversations with craft brewers and in marketing copy," Bernstein said in an email, explaining he anticipates breweries will use the word at events, in bars and on bottles.

But at the end of the day, taste will rule. "Independence will matter to many consumers, but flavor and taste are the ultimate arbiters," Bernstein said.