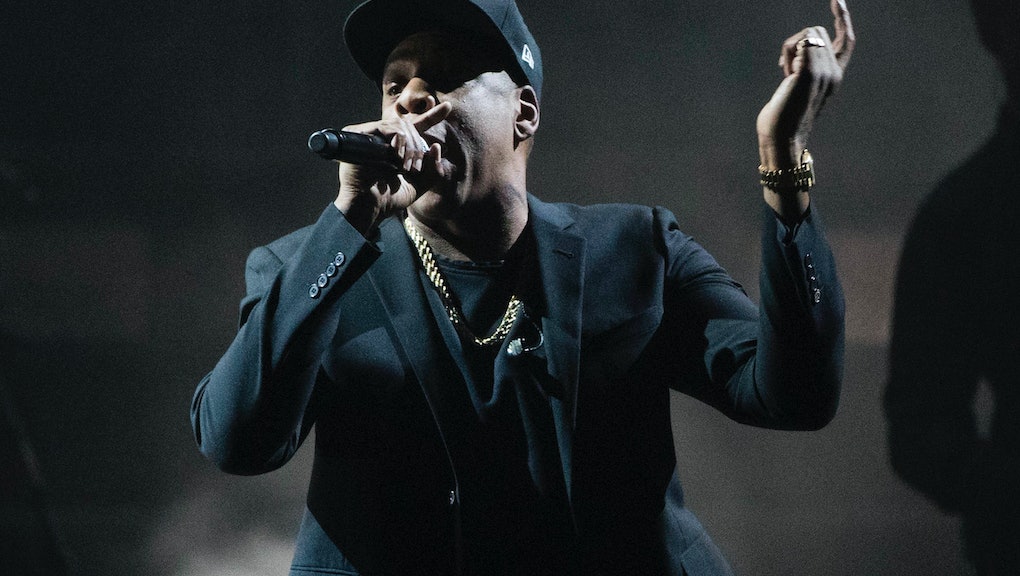 On June 22, Jay-Z put out a call for art and community action with an eye on social justice: "Now is the time to recognize that through our voices we really can effect change," he wrote in the Hollywood Reporter. "Some of us will do the important work locally at the micro level to awaken our neighbors. Some of us will work for progress regionally." And some of us will partner with the biggest communications conglomerates in the world to distribute thought-provoking art to every corner of the globe.

These are the aims of the newly re-hyphenated Jay-Z, and a sample of the spirit that carries through his new Tidal and Sprint teaser for his highly anticipated 13th studio album, 4:44. Released Tuesday night, the trailer clocks in at 30 seconds long, but it's loaded with meaning and works to tie up several of the threads from the emcee's life in recent years.

Following the album's previous trailer, "Adnis," which shared a snippet of a song presumably with the same name, the latest tease is titled "Kill Jay Z" (notably hyphenless). It depicts a boy running franticly down an open alleyway. A quick zoom-out offers a look at the lettering on his shirt, which reads: "Stay black."

It's worth noting the power Jay-Z sees in a T-shirt. In 2014, he helped sneak a box of black T-shirts into the Barclays Center for his Brooklyn Nets to wear. The shirts read, "I can't breathe," in honor of Eric Garner, a Staten Island man who that year had been killed by police. The small protest made national news, garnering feature-length stories in the New York Times, the Wall Street Journal and the Washington Post.

The Sprint commercial appears to play with a similar narrative. Jay has been more willing to confront issues like police brutality in his recent music than he has in the past. His most recent solo single, 2016's "Spiritual," told the story of "a boy from the hood that/ Got my hands in the air/ In despair don't shoot/ I just wanna do good, ah."

He wrote it a while ago, the rapper clarified in a statement, adding that Top Dawg Entertainment's Punch told him to release it after Michael Brown was killed at the hands of police in 2014.

"Sadly I told him 'This issue will always be relevant,'" Jay writes. "I'm hurt that I knew his death wouldn't be the last."

But even when he's interested in a more socially conscious message, Jay-Z never lets you forget that he's a business, man. As the music in the trailer reaches a climax, it cuts away to an ill-fitting Sprint ad: "Switch to Sprint and get six months of Tidal hi-fi on us" with a whole bunch of jargon beneath. Clearly, corporate advertisers are willing to get arty up to a point, but you've still got to get the bottom line details across somehow.

It remains to be seen how controversial of a statement Sprint be willing to co-sign on the record itself. We probably won't be getting a "Fuck the Police"-type of joint, but the sentiments of resistance will most likely be there for those willing to take them up.