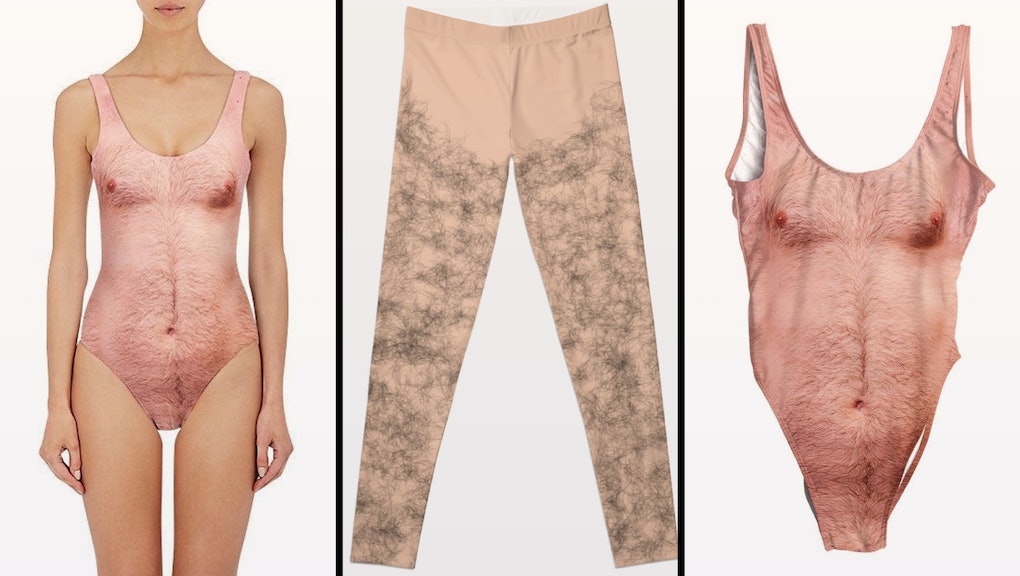 We live in such complicated, stressful, anxiety-ridden, strange times. But without fail, almost every week, a clothing company tries to fuck with us. By that we mean, they release an item of clothing so unnecessary, so odd and so clearly only for clickbait purposes that we have to wonder: Why? Why are they doing this to us, the nice, pleasant people of the world?

A prime example of this is the new epidemic of hairy clothing. Think the hairy swimsuit that went viral earlier this month, courtesy of Beloved Shirts.

For $59.95, you could buy a swimsuit screen-printed with the image of a hairy man's chest. Who would buy this? We have no idea, but plenty of people had thoughts on it.

As Mic has pointed out before, this is not a fashion trend any of us have to worry about popping up at H&M anytime soon. Instead, this is "trending fashion." What that means is that it's an item of clothing meant to create buzz and even sometimes rage, "because really, how hideous."

In trying to figure out why this hairy swimsuit even came to exist, we actually found that this is far from the first hairy item of clothing manufacturers have attempted to sell us. Back in 2013, there was a rather horrific news story out of China that claimed that a pair of hairy leggings were being sold as "anti-pervert," meant to ward off sexual harassers and yeah, even rapists.

That's problematic in more ways than one, but over in the U.S. strangely that same year, more subtle hairy leg leggings appeared over on Redbubble, going for $50.

Now, fast forward to the present. Perhaps because of the viral success of this hairy swimsuit, at least one outlet is trying to make hairy leggings happen again. Over on HuffPost U.K., there's a story titled "These hairy leggings take not shaving to the next level." In that story, there's a series of pictures of a woman posing in these hair leg leggings, which they note is from the custom clothing manufacturer Contrado.

The funny thing though is that these leggings as shown by HuffPo were created not by Contrado, but by HuffPo. "The hairy leggings is not something that is available for purchase at the moment but we are looking into it and hopefully it should be available soon," a spokesperson for Contrado told Mic. So now even media outlets are trying to create buzz and viral moments over a product that isn't even available for purchase.

What some people might not get though is that it's really not as funny as it seems. Plenty of women do have leg hair and chest hair, and maybe a lot of it, so it's not as unrealistic as one would think. Poking fun at the idea only reinforces the idea that it'd be highly bizarre for a woman to walk around with her body hair on display, when it really shouldn't be that bizarre at all. We're born with hair, some more than others, and that's totally cool.

In a time when the body positivity conversation is including things like supporting women who don't shave body hair, these hairy items of clothing aren't just unfunny but really, truly unnecessary.