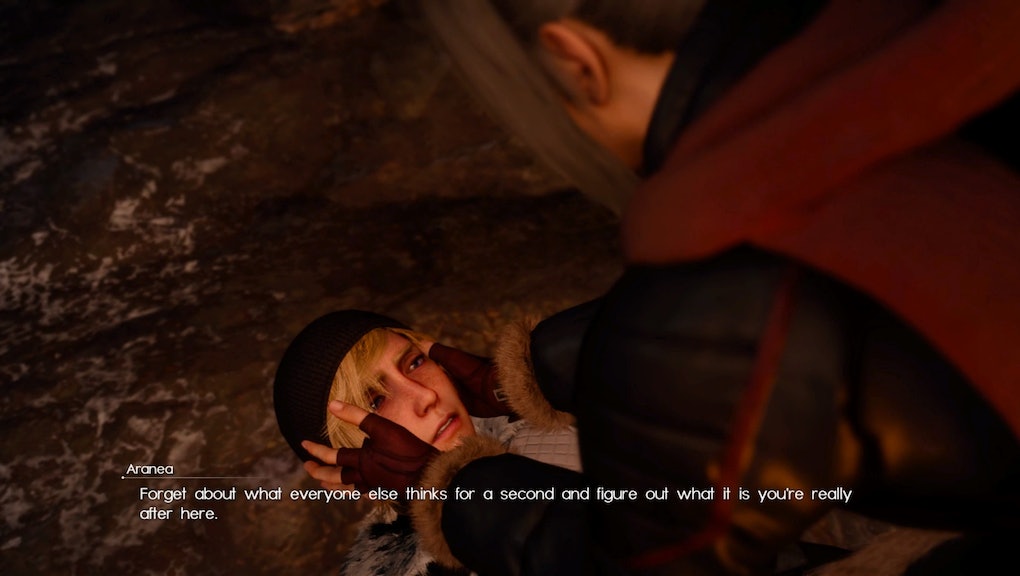 'Final Fantasy 15' DLC: In "Episode Prompto" we are all Aranea

Aside from big hair, large quantities of belts and stilted voice acting, soap opera-like melodrama is a mainstay of recent Final Fantasy games — and if I'm being honest, that nonsense gets old real fast.

But in the most recent downloadable expansion for Final Fantasy 15, "Episode Prompto" — in which you play as Prompto, Noctis' blonde, spunky companion — the mercenary Aranea is sick of all the whining, too. And she makes zero effort to hold back her exhaustion.

This is clear from the first time we see her. When Prompto discovers who his real father is, Aranea — who you'll recognize from the main campaign — wants nothing to do with his tragic monologuing.

"I don't know what's got you so shook," Aranea says as she enters the frame. "But you can deal with it later. Let's move."

Of course, once Aranea leaves Prompto's side so she can mop the floor with some Magitek soldiers, Prompto descends into theatrics yet again. When you start a campfire, you'll have the option to attempt to burn the Magitek barcode off Prompto's wrist.

But then Aranea jumps in before he can do anything too drastic.

"Don't tell me you thought that would work," she says, cracking a health potion over his crusty, scabby arm.

But no, that's still not enough to get Prompto out of his Maury-esque family drama funk, because then he just moves on to how much he thinks his lifelong best friends hate him.

"How could I possibly see them?" he wonders. "They'd never accept the real me."

Aranea's reaction is pretty much all you need to know about how the rest of that conversation goes:

At one point, Aranea literally pins Prompto down, takes his face in both her hands and yells directly at him to make the message stick.

"Forget about what everyone else thinks for a second and figure out what it is you're really after here," she tells him.

Basically, Aranea is the embodiment of my experience screaming at the television for the 50 or so hours I spent playing the main Final Fantasy 15 campaign, and I'm so thrilled someone else has taken on the job of yelling at these stupid boys on my behalf.

We'll have another writeup with more extended thoughts on the DLC later in the week. "Episode Prompto" is available now for $4.99 through the PlayStation Store.