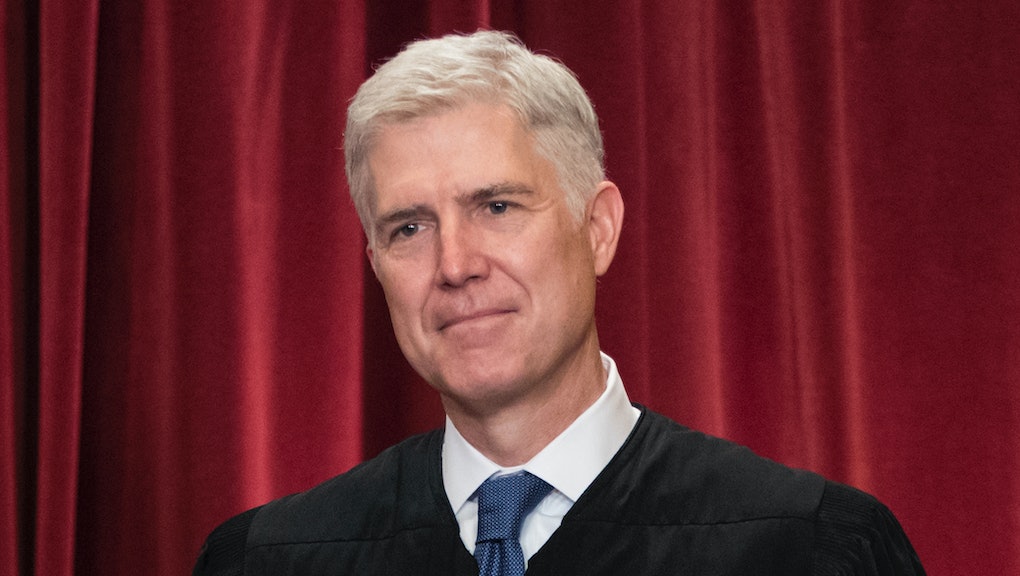 Sen. Dianne Feinstein of California, the top Democrat on the Senate Judiciary Committee, told Politico that Supreme Court Justice Neil Gorsuch was turning out to be a down-the-line conservative.

"We've got another Scalia," Feinstein said.

She doesn't seem to be alone in her assessment.

Sen. Richard Blumenthal (D-Conn.), a former Supreme Court clerk, said his colleagues were concerned Gorsuch's even-handed performance during his confirmation hearings "might be more an act than it was a real persona." He called the justice's early decisions a "disappointment."

Here's a look at four major cases from the final day of the court's session that found Gorsuch embracing a hard-line conservative position.

The Supreme Court has agreed to take up President Donald Trump's travel ban when it returns in the fall. In the meantime, the justices lifted limited injunctions against the ban that prevented it from going into effect.

The order from the court affirmed that Trump couldn't prevent a host of individuals from entering the U.S., including college students and those with close family members who are U.S. citizens. Only individuals without a "bona fide" relationship to the United States could be denied entry, which may result in some refugees being refused travel to the U.S.

However, Justice Clarence Thomas wrote an opinion that stated, "I agree with the court that the preliminary injunctions entered in these cases should be stayed, although I would stay them in full." In other words, Thomas would have allowed the travel ban to go into full effect:

I agree with the Court's implicit conclusion that the government has made a strong showing that it is likely to succeed on the merits — that is, that the judgments below will be reversed. ... [W]eighing the government's interest in preserving national security against the hardships caused to respondents by temporary denials of entry into the country, the balance of the equities favors the government. I would thus grant the government's applications for a stay in their entirety.

The court declined to hear a case about the rights of citizens to openly carry guns outside their homes. Only four justices must vote "yes" for a case to be heard. This means at least one conservative on the bench agreed the court should not be brought before the court.

In fact, two conservative justices strongly dissented to the decision: Thomas and Gorsuch.

The dissent also made the claim that the Constitution's framers "reserved to all Americans the right to bear arms for self-defense."

The court ruled the Constitution requires same-sex parents be listed on their children's birth certificates. This is in line with the court's 2015 decision on marriage equality, which affirmed rights associated with marriage apply to all marital unions, regardless of gender.

Gorsuch wrote in a dissent about children's birth certificates that "nothing in Obergefell indicates that a birth registration regime based on biology [...] offends the Constitution."

But the dissent itself brings into question what rights Gorsuch believes are innately associated with the right to marriage itself and calls into question his overall views on LGBTQ equality from a legal standpoint.

Gorsuch takes a swing at the church-and-state barrier

In a majority opinion, Chief Justice John Roberts wrote that a state can't universally refuse subsidies to a church on constitutional grounds because the court believes it violates the free exercise clause of the First Amendment.

Roberts went out of his way to note this "case involves express discrimination based on religious identity with respect to playground resurfacing." He added that the court was not addressing "religious uses of funding or other forms of discrimination."

Gorsuch wrote in a concurrence that he couldn't join the footnote.

I worry that some might mistakenly read it to suggest that only "playground resurfacing" cases, or only those with some association with children's safety or health, or perhaps some other social good we find sufficiently worthy, are governed by the legal rules recounted in and faithfully applied by the court's opinion."