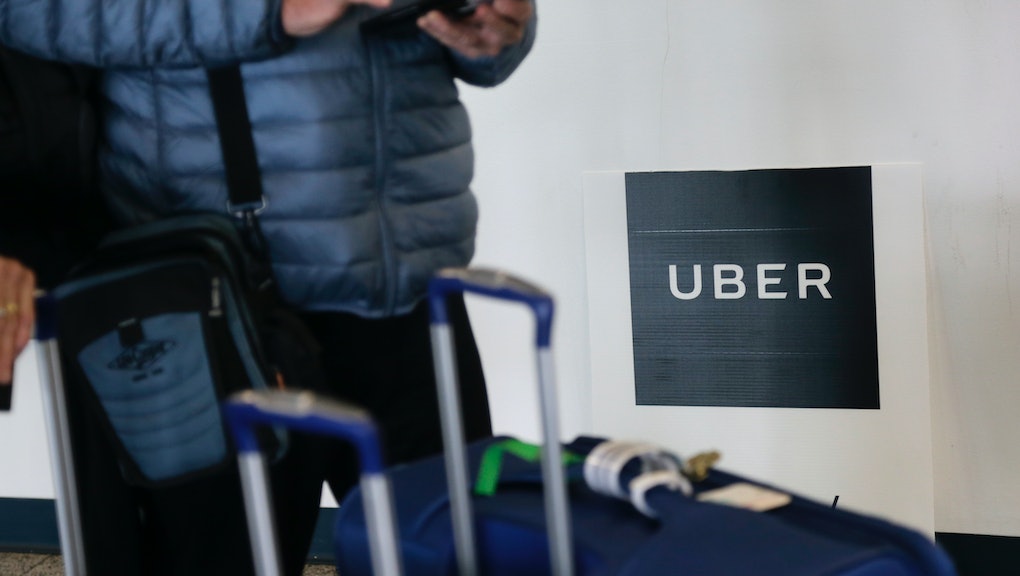 Lining up along a fence to urinate. Relieving themselves in the bushes. Carrying a water bottle in their cars in case of an emergency. These are a few of the options Uber and Lyft drivers rely on when they have a pick-up at New York City's John F. Kennedy International Airport — and nature calls.

That's because there are still no restrooms for ride-hail drivers at JFK.

The Independent Drivers Guild, which represents more than 50,000 drivers in NYC, launched a petition in December 2016 that urges Port Authority to add a clean facility to use the restroom in the separate lot where Uber and Lyft drivers must wait.

More than six months later, nothing has changed.

“Travelers, taxi drivers and even pets have access to a restroom at JFK, but ride-hail drivers endure grueling waits in a hot satellite lot where there is no dignified place to use the restroom," Ryan Price, Executive Director of the Guild, said in a press release.

"For years, the state and the port authority have stripped for-hire vehicle workers of the basic right of a place to use the bathroom because they’re primarily immigrants, so they think they can get away with it," Price wrote. "If these workers were white and from the United States, this would never happen.

"This is a huge public health issue, and an abusive way to treat workers who serve the public."

"This is a huge public health issue, and an abusive way to treat workers who serve the public."

Mic spoke with three ride-hail drivers represented by the Independent Drivers Guild. Hans, who has been an Uber driver for about four years, said in a phone interview, "I invite those making the decision, I invite them to come on a hot summer's day and just take a whiff of the air and how terrible it smells of urine."

The three drivers told Mic they often see people relieving themselves in the bushes near the lot due to a lack of accessible and sanitary options.

"It is quite embarrassing to do that if you cannot hold it any longer or anticipate it'll become a problem," Hans said. "Can you imagine having to have a 40-minute drive afterwards when you didn't have an opportunity to relieve yourself prior to leaving — and then hit traffic? It's not healthy for the body."

He's right — holding in your pee can increase your chances of getting a urinary tract infection as well as more long-term urinary tract issues, such as frequent and painful urination. Holding it for too long can also weaken your pelvic floor muscles and stretch your bladder out.

Their bathroom options are unsanitary, degrading and illegal. And there are even fewer options for female drivers, who may find urinating outside more difficult.

"As a woman, I just can't do what the guys do," Michele, an Uber driver for about 16 months, said in a phone interview. "I can't do the bottles. I find myself having to stop at places where I need to purchase something in order to use a proper restroom. Each time I have to use the bathroom, there's usually a price involved."

"I can't do the bottles. I find myself having to stop at places where I need to purchase something in order to use a proper restroom."

Michele described instances where she will be waiting in the lot for about two hours, abstaining from drinking water so that she doesn't have to pee. Then she makes the approximately 20-minute trip to the nearest bathroom and risk losing her spot in line.

Michele also said she avoids parking along the perimeter of the lot because that's where the men often relieve themselves. "It smells," she said.

Uber drivers are providing a service for JFK and for riders trying to get home. "So why not provide us with a proper service so we can be OK also?" Michele argued. "We're not asking for a lot."

"We're not asking for more money," said Jose, another driver. "We are asking to be treated like normal people to be able to use a normal restroom. To be able to wash our hands."

“For more than a year, Uber has been urging the Port Authority to allow us to pay for bathrooms at JFK because drivers should never be subject to these conditions,” an Uber spokesperson said in an email on Friday.

A spokesperson for the Independent Drivers Guild said in an email on Friday that Port Authority told them that port-a-potties were installed Friday morning, and that they are “continuing to follow up on our proposal for a restroom trailer with sink/running water.”

We reached out to Port Authority and will update with any response.