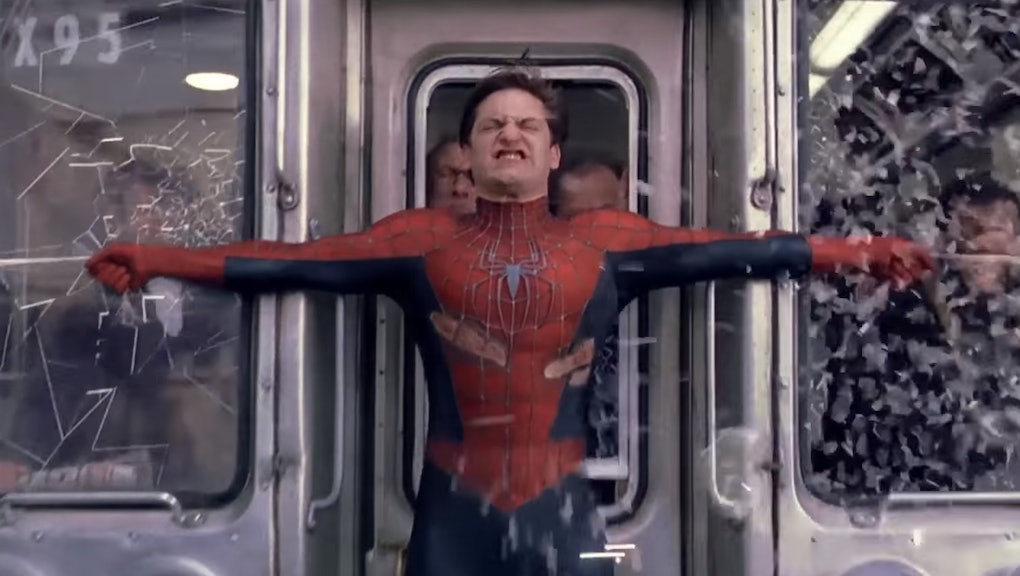 In just a few short days, Peter Parker will put on his red-and-blue spandex and swing into theaters once more for Spider-Man: Homecoming, Spidey’s first solo film in the Marvel Cinematic Universe. Starring Tom Holland in the title role, Homecoming is receiving early positive reviews and has even been called the best Spider-Man movie ever by some critics. Before this new reboot officially hits theaters, it’s worth revisiting the film that was previously regarded as the web-head’s best big-screen appearance: 2004’s Spider-Man 2.

In the years since the middle film in Sam Raimi’s Spidey trilogy was released, the comic book movie market has exploded. There have been 35 films featuring Marvel Comics characters in the past 13 years — that’s counting movies in the Marvel Cinematic Universe, the X-Men series and various other flicks. Of all those films, I can only name three — Iron Man, Captain America: The Winter Soldier and Logan — that I’d say surpass Spider-Man 2. It might be tough to recall after spectacles like The Avengers and Captain America: Civil War have become the norm, but Raimi’s second Spider-Man outing really is a remarkable blockbuster.

None of this meant to sound overly critical of the MCU. What Kevin Feige and Marvel have accomplished — creating an interconnected network of films that build off of one another — is astonishing, if a little overwhelming. The MCU has thus far yielded 15 movies (Homecoming will be the 16th), all of which have earned respectable reviews and which continue to build toward the third and fourth Avengers movies. But the MCU’s films are far from perfect, and the studio could learn a few things from Spider-Man 2.

Most films in the MCU share a similar problem: The villains are less than spectacular. Outside of Loki (Thor and The Avengers) and Red Skull (Captain America: The First Avenger), the MCU baddies are often just mirror images of the film’s hero or, worse, downright forgettable. Ant-Man, Doctor Strange and Guardians of the Galaxy are good examples of great films that worked in spite of their lackluster bad guys. But Spider-Man 2 succeeds as a narrative in part because it features one of the most compelling foes in a comic book movie: Doctor Otto Octavius, aka Doctor Octopus.

Played spectacularly by the always-charming Alfred Molina, Doc Ock is more than a mere reflection of Spider-Man, and he isn’t a glorified plot device whose main purpose is to help the hero grow, to get the protagonist from point A to B. He’s given his own tragic subplot: When we meet him, Octavius is a scientist who wants to make the world a better place by creating a sustainable, endless energy supply, but he soon loses everything he holds dear — his reputation, his career, his wife — when his experiment goes awry. (This is still a comic-book movie, after all.) Before he’s disfigured and corrupted by the artificially intelligent limbs attached to his body, he’s an innovator, a would-be mentor to Peter Parker who tells him that “intelligence is not a privilege; it’s a gift. You use it for the good of mankind.”

Even after he descends down a path of madness and villainy, Doc Ock doesn’t just become some flat caricature. At the film’s end, he achieves redemption, sacrificing himself to stop another out-of-control experiment from destroying all of New York City. The plot details may sound ridiculous, but there really is some pathos to Molina’s performance, and when his character meets his end, it means something — it certainly carries more meaning than the end of Thor: The Dark World, when whoever’s the enemy in that is inevitably defeated.

Doctor Octopus is simply a richer, more complex and more satisfying character than virtually every villain that’s appeared in a Marvel film since. It’s impossible to argue against the MCU’s financial success, but it’d be nice if the filmmakers put more of an emphasis on crafting adversaries as layered and magnetic as Molina’s Doc Ock.

Spider-Man: Homecoming will be released nationwide on July 7.