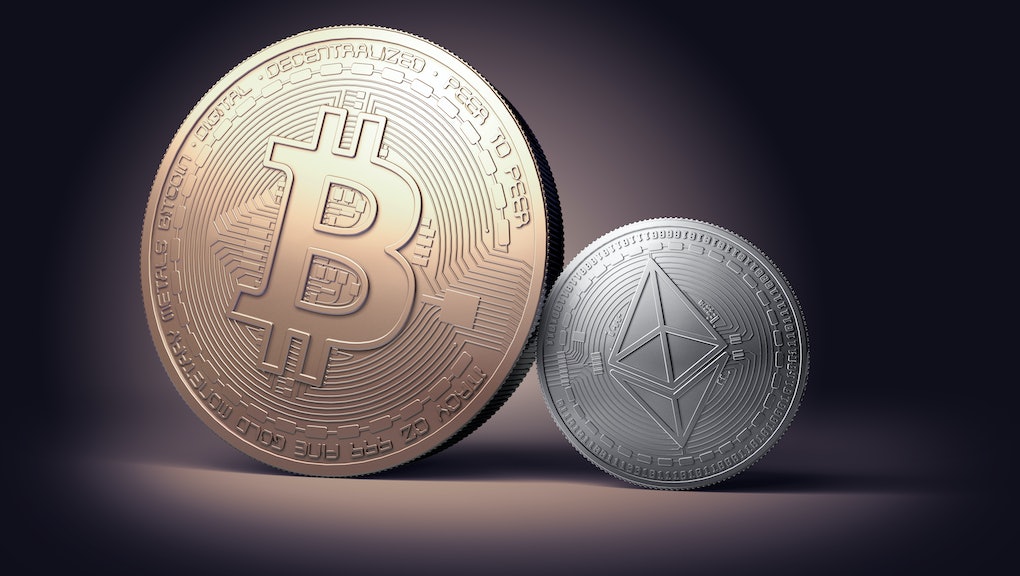 Bitcoin and Ethereum crash: Can you get rich from a price drop? 3 alternative ways to invest

Thinking about investing in a virtual currency like bitcoin or Ethereum-traded ether? These cryptocurrencies are digitally traded tokens that can be used to make purchases, digitally sign contracts or hold a store of value like gold — though their prices may fluctuate rapidly and even crash without warning. That’s why you must be sure you’ve done your research on the potential risks, as well as rewards, before buying in.

There are certainly good reasons to consider investing in cryptocurrencies. Most coins with a sizable base have gone up in value in recent years; the most well-known cryptocurrency, bitcoin, recently surpassed the value of gold, converting hundreds of dollars into millions for lucky early investors. And unlike gold, these coins can easily be easily exchanged for gift cards or even spent directly at major retailers like Overstock.com.

Then again, there are also good reasons to not invest in cryptocurrencies — mostly because their prices remain quite volatile and they come with the risk of being hacked. It’s also tough to predict which cryptocurrency will be the next big winner: Ether is quickly gaining in popularity as a cryptocurrency with advantages over bitcoin, thanks to features like the ability to create smart contracts. But there are literally hundreds of virtual currencies in circulation, including some lesser-known ones like PureVidz, Stress and Allion.

Given all the uncertainty, as a rule, you should only invest as much in currency as you can afford to lose, since — for every lucky outlier who has, say, quadrupled their wealth in just over a month, or turned four-figures into seven figures over a few years — there are more who have lost just as big or bigger.

Still interested? Mic’s introductory investment guide can walk you through the basics on how to buy or invest in detail. Just like you need a stock exchange to buy a stock, you usually need a trading platform — such as Coinbase for bitcoin and Ethereum for ether — to buy a virtual currency. There are many platforms out there, but not all can be accessed from the U.S.

Now, for those who want more creative ways to invest in cryptocurrency — besides simply buying the coins and holding them — there are moves you can make to try to gain an edge. Mic talked with multiple crypto experts, including specialists in bitcoin trading, initial coin offerings and bitcoin exchange-traded funds, to uncover alternative ways to try to grow your cash with digital coins.

Whether this is your first time investing or you’re looking for your next big opportunity, here are some other ways to get into cryptocurrency investing.

On June 21, ether prices dropped over mere minutes from just shy of $300 to $13 — before recovering. Yet that flash crash actually could have been a money-making opportunity for the right investor. As with traditional stock exchanges, most cryptocurrency exchanges now offer the option of setting up orders to buy or sell if a coin’s value reaches a certain level — the idea being you have confidence the price will eventually recover from its “blip.”

Hypothetically, during the crash you could have bought about 10 units of ether for less than $150 — which would now be worth more than $2,000.

Sure, hindsight is 20/20. But a look at charts for the largest cryptocurrencies shows that price drops are not uncommon, and you can always just dip a toe in. Let’s say bitcoin is trading at $2,500. If you think it will go down but recover, you could program your account to buy a fractional share — say, $500 worth of bitcoin — if the price reaches a certain low point, like $1,000 or $2,000.

You could do the same for ether, litecoin or almost any other currency. “A lot of traders use” this strategy, said Charles Bovaird, a contributor to Coindesk, in a phone interview.

Indeed, those traders who haven’t hedged their bets with these options — or unfortunately hedged in a way that triggered selling at super-low prices — might actually regret it: “There were a ton of people on Reddit, when the [Coinbase-owned exchange] GDAX [ether] flash crash occurred,” he said. You might have started with $10,000, he said, but suddenly “it’s all gone.” (Luckily, at least some investors hurt by the flash crash will be reimbursed.)

At least in theory, there are ways you can try to get an edge. A trader who requested to be identified only as BKCryptoTrader has used technical analysis to come up with charts he said can serve as good predictors of price movements, based on past buying and selling behaviors. While they can’t predict flash crashes, they can predict the more common volatility one commonly sees in cryptocurrencies. “Humans are predictable by nature,” he said in a phone interview. “Cycles repeat themselves.”

But Spencer Bogart, managing director and head of research at Bitcoin investment firm Blockchain Capital, told Mic there is really no foolproof way to hedge against cryptocurrency volatility.

Bogart explained that the limit-order method involves what is referred to as counter-party risk, meaning you are leaving money in the hands of a third-party (an exchange) that could more easily be hacked. He instead advised treating bitcoin as a long-term investment, one whose value will continue to see regular fluctuations but will remain on a steadily upward trajectory.

Many of the smart crypto kids have moved beyond simply buying and selling cryptocurrencies — they’re now buying “shares” of crypto businesses going “public” in what’s referred to as “initial coin offerings.” One catch? According to research from Smith and Crown, a site that tracks ICOs, ICOs are not like regular equity shares for stocks. ICOs “are much weirder.” Unlike initial public offerings, most ICOs provide no voting rights, no profit distribution and no legal rights or recourse if something goes wrong.

This is a great reason to do a ton of homework first; here are three key questions to which you should know the answer before buying in to a given ICO. Remember: Investing in an ICO represents a bet on one of two things. The first is that the currency will obtain widespread use and possibly improve on a predecessor. This may sound like a difficult trick to pull off, and while some believe ether has done exactly that in relation to bitcoin, lesser-known coins are going to be a bigger gamble.

The second bet is that a given token will be useful for a specific purpose down the line. An example of this, Smith and Crown research director Matt Chwierut said in an interview, is Augur, a prediction market platform whose coin has unique properties that can only be used on Augur. Chwierut argues that investing in an ICO can be lucrative, especially compared with a stock IPO, in which investment bankers usually take the first and best cuts of shares. So you can see how the area is growing, Chwierut provided the below table — showing the growth of ICOs and how much capital they’ve attracted recently.

Now — this table excludes funds returned to investors or sales that failed to raise more than $25,000. Chwierut declined to estimate how many ICOs have fallen into either of those categories, but said they’re not out of the ordinary. “If I post on a forum asking for money and don’t get enough, is that a real sale?” he asked rhetorically. “What about if I post on one site asking for money? It’s one reason we don’t systematically track that side of the market.”

These numbers merely reflect how much the people behind an ICO float made, not how much the investors themselves made. That is much more difficult to calculate at the moment, especially since most ICOs are so new.

Chwierut warned that a lay investor will have to spend a lot of time getting immersed in the crypto universe to fully understand what they’re investing in. The Information has also written about other caveats to consider when it comes to ICOs — including the fact that the Securities and Exchange Commission is likely to get involved, and how the figures in tables like the one above suggest we’re in the midst of an ICO bubble.

That is also the view of Bogart, who said the safest bet would be to invest only only small sums of money — again, no more than one would be comfortable losing — into any new ICO at this point.

3. Try mining — or get ahead of bitcoin and ethereum ETFs

Finding an exchange traded fund is a long-term play because right now, no bitcoin or Ethereum ETFs exist. The SEC is considering making them legal, which would mean you could buy and sell index funds that trade on how well bitcoin, ether or any other cryptocurrency is performing — and do so on a major exchange like the NASDAQ.

In March, the SEC again rejected rule changes that would have made bitcoin ETFs possible (it’s been looking at them since 2014). Right now, the commission said, cryptomarkets don’t have enough uniform regulation. Further, it said that even if it wanted to regulate it, some exchanges would still resist legitimizing themselves.

But there are hopes within the crypto community that crypto ETFs could still come alive. Bogart, for one, said there is an outside change that the new administration will have a much more favorable view of crypto ETF products than the Obama administration, which Bogart said was viewed in the crypto community as having an “attack” mentality. He also said investors should keep an eye on whether regulatory agencies in other countries, like Canada or the U.K., give the okay to ETF products before the U.S. does.

In the meantime, if you are reasonably tech-savvy and are willing to invest in the hardware, you could consider “mining” tokens and coins. This PCWorld story is a few years old but offers a decent overview, as does this Investopedia post; Coindesk has a solid guide to Ethereum mining; and this guide to mining bitcoin is helpful — as is this cloud mining explainer for those who don’t want to buy equipment.