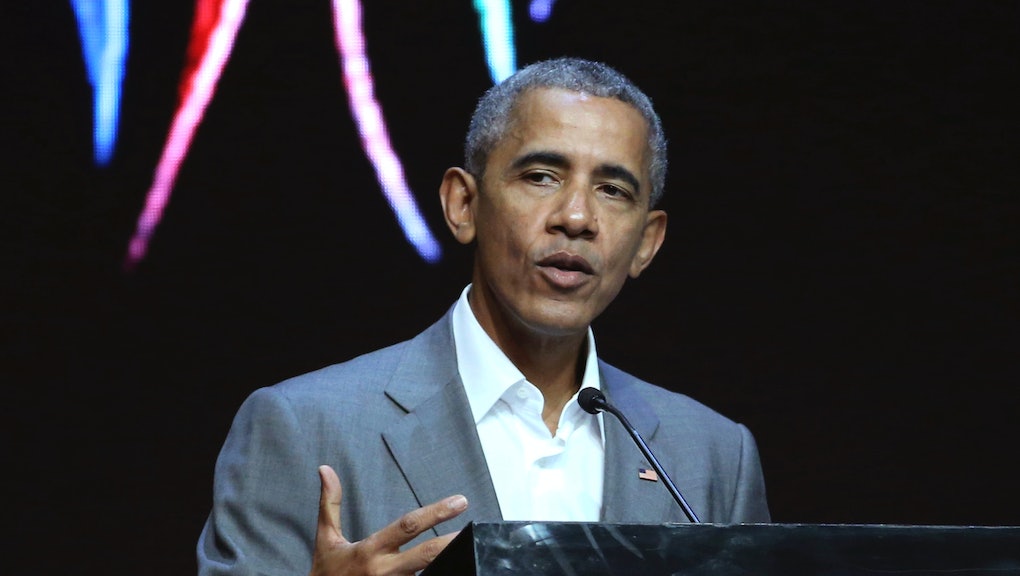 Former President Barack Obama warned against “aggressive” nationalism and instead urged people to stand up for tolerance during a Saturday speech in Jakarta, Indonesia, the Guardian reported.

“It’s been clear for a while that the world is at a crossroads. At an inflection point,” Obama said during his keynote address at an Indonesian Diaspora Congress. Obama also said that some countries had adopted an “aggressive kind of nationalism” that resulted in “increased resentment” toward minority groups.

Obama added that failing to stand up for “tolerance and moderation” will stunt the global progress of the last few decades.

Though speaking in Indonesia, Obama’s words can easily read as an indictment of the current state of the United States. President Donald Trump’s political positions have long curried favor from white nationalist groups and the alt-right, which has become a large, unwieldy movement in the United States.

After the election, the United States saw a quick rise in violent hate crimes as well.

Obama underscored his points about respect with his own personal story about Indonesia. Obama moved to Jakarta in 1967 at age six when his mother married an Indonesian man after divorcing Obama’s Kenyan father.

The audience burst into applause at the line, according to the Guardian.

During his final State of the Union, Obama slammed anti-Muslim rhetoric, a hallmark of Trump’s election campaign.

“When politicians insult Muslims, when a mosque is vandalized, or a kid bullied, that doesn’t make us safer,” Obama said in January 2016. “That’s not telling it like it is. It’s just wrong. It diminishes us in the eyes of the world. It makes it harder to achieve our goals. And it betrays who we are as a country.”

Obama also mentioned Trump’s decision to withdraw from the Paris climate agreement. Without mentioning the president’s name, Obama noted that several of his environmental policies remain in place.

“First of all, I think it’s important that even though the current U.S. administration has signaled it is going to pull out, technically it’s not out yet,” he said. “Point two is that many of the changes that we locked in during my administration continue.”

Obama finished the speech by returning to the theme of “unity in diversity,” which is Indonesia’s national motto.

“Let’s face it, If people do not show respect and tolerance, eventually you have war and conflict. Sooner or later societies break down.”