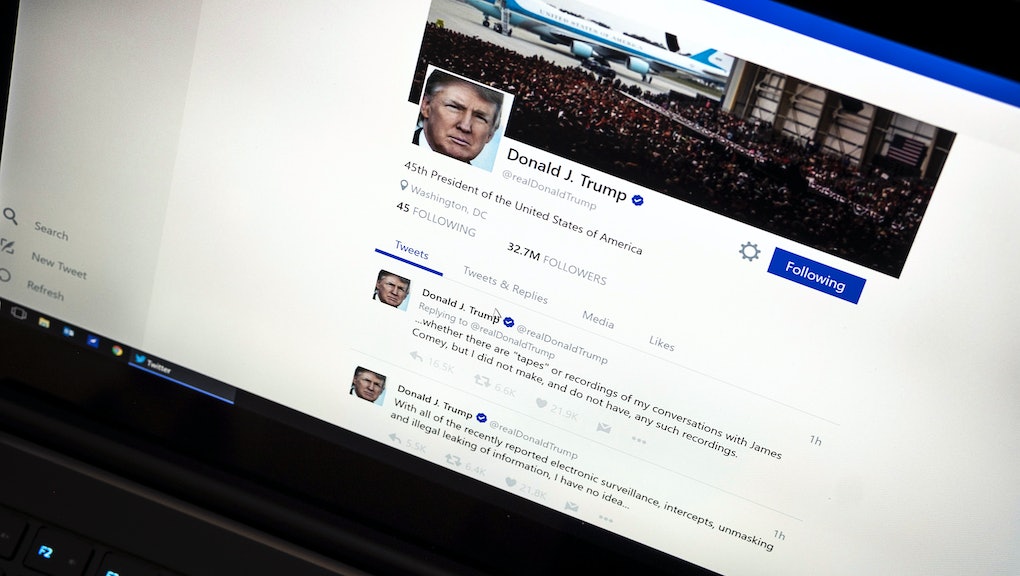 He’s calling a spade a spade.

President Donald Trump lashed out at critics of his “election integrity commission” on Twitter Saturday, describing the group specifically as a “very distinguished VOTER FRAUD PANEL.”

Trump created the panel — officially known as the Presidential Commission on Election Integrity — after months of making unproven allegations of massive voting and registration fraud. The Washington Post reported in January that Trump, without evidence, told Congressional leaders that three to five million illegal ballots cost him the popular vote.

With state officials from both parties refusing to give up the information, Trump demanded in his tweet, “What are they trying to hide?”

The panel’s creation was couched in a mission of finding out what improves and erodes voter confidence in the U.S. election system and how to root out vulnerabilities.

“This bipartisan commission will review ways to strengthen the integrity of elections in order to protect and preserve the principle of one person, one vote because the integrity of the vote is the foundation of our democracy,” Vice President Mike Pence, chairman of the panel, said in a May statement.

But watchdogs have called the panel, which seems to have broad yet vague powers and aims, everything from a fishing expedition to an “assault on voting rights” and a “dog whistle” for race-driven voter suppression.

Trump’s latest tweet spurred renewed criticism from election experts such as Michael McDonald of the University of Florida, who said the data request was a “cynical, calculated ploy” to get states to refuse to release voter data and then accuse them of a cover-up.

And Rick Hasen of the University of California, Irvine, wrote Friday in Slate that the entire commission is a sham — “a voting rights nightmare that is being enacted so clumsily it just might backfire.”

The panel only began work in earnest this week, and its first step — requesting reams of sensitive data — immediately hit a wall. Dozens of states have indeed said they will either ignore or only partially comply with the panel’s request for detailed information on registered voters dating back to 2006.

The information, requested in a letter from the commission’s vice chairman, Kansas Secretary of State Kris Kobach, ranges from full names and dates of birth to partial social security numbers, voting history and veteran status.

The massive data request spurred governors and secretaries of state across the country and from both major parties to say they’re trying to protect — not hide — sensitive voter information.

Former Missouri Secretary of State Jason Kander, who leads a group called Let America Vote, said in a Friday CNN appearance that the idea of systemic voter fraud is laughable: Americans are more likely to be hit by lightning than try to fiddle with a ballot.

Some of the officials who will not comply with the request say they’re barred by law from giving that level of detail — including, ironically Kobach himself.

In an appearance on National Public Radio’s “All Things Considered,” Kobach, who’s also running for Kansas governor, argued that “the federal government doesn’t have the authority to take anybody off of any voter rolls” or force states to turn over data.

“Every objective observer has said there is zero evidence of millions of people voting illegally. It seems striking that as one of the leaders of a commission on voting integrity, you’re not willing to say the same,” NPR’s Ari Shapiro asked Kobach during the Friday interview.

“Well, I guess it all depends on what you define as evidence, right?” Kobach replied.