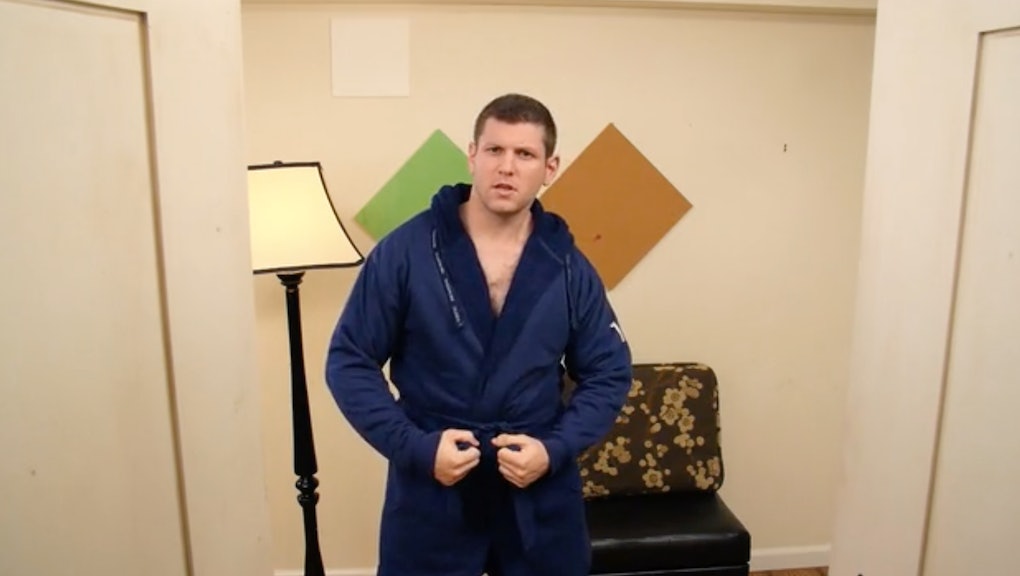 The DudeRobe is here to prove, once and for all, that masculinity is so very fragile

But in the year 2017, a year of much fragile and toxic masculinity, there are apparently men out there who put on robes and think, “No, this is not fine.”

I urge you to cherish these next few seconds, reading these words, because we’re about to introduce you to something rather upsetting:

Yes, as in a robe for dudes, literally created because, as the Kickstarter video states, “Bathrobes are too girly.” Note the “more manly” belt that cinches it at the waist.

The DudeRobe collection comprises a robe, shorts, pants and hoodies, all sold separately, with terrycloth on the inside and sweatshirt material on the outside, in navy blue and grey.

A major selling point for DudeRobe, which was created by former sports agent Howie Busch, is that apparently people think a man in a regular bathrobe — a ChickRobe, probably, according to them — is creepy, as shown via this very helpful chart.

Also, with the addition of the shorts and pants, there’s less of a chance of guys flashing people, which we suppose is very thoughtful.

In an interview with Mic, Busch outlined exactly how this idea came to him.

“Basically seeing my wife in her robe everyday after her shower,” Busch said in an email. “I started thinking, ‘Hey, I’d like to have something comfortable for days when I’m just chilling, like a lazy Sunday.’”

“Since I’m not a robe guy — and most of the guys I know aren’t either — I started thinking of other options,” Busch continued. ”And that’s when I came up with the idea for a towel-lined product that’s got more of a hoodie look and style to it.”

As far as criticism that robes were already unisex, Busch is ready to fight back with his own kind of logic.

“First of all, the word robe literally comes from the French word ’robe’ which translates to English as ‘dress,’” Busch said. “No, I’m not kidding. And yes, bathrobes have always been unisex and haven’t changed much over the years, so from my perspective, it was long overdue.  Most guys I know don’t wear a bathrobe.”

At this point, some of you may be thinking, “This is a gag gift,” but we’re here to tell you that it is indeed very real, and very, very popular. DudeRobe had a goal of raising $25,000. It raised more than $60,000, with funding wrapping on Friday.

So DudeRobes are real, just like the RompHim — another item of clothing that had to be gendered after many women embraced the romper – was real. For Busch, he doesn’t see this gendering as anything different than when brands make more feminine versions of leggings or underwear.

“Personally, I think we’ve become far too politically correct as a society,” Busch said. He continued:

“The criticism and level of vitriol [makes] me laugh. Women have Pink for loungewear, Lululemon was founded to make athleisure apparel for women — is this so different?  Why is it only offensive if it’s a thing for men (although I fully embrace women wearing DudeRobes and a women’s version is already on the drawing board). Truth is, being a dude is more attitude than sex.  Finally, I’d say that there are far more people who are enthusiastic about the product than those criticizing it.”

However, what is outstandingly ironic about this DudeRobe is that robes really were originally created for men, with men years and years ago wearing robes as a cozier, more relaxed alternative to their coats. But now, we guess since women embraced the robe — because robes are indeed cozy as hell and wonderful — some men think robes need a masculine makeover.

So if you really want to abide by that logic, then here are some other things that women wear that men do too:

While men try their hardest to make all of these incredibly basic clothing items gendered, we’ll be waiting here in our cozy, warm, ungendered robes.