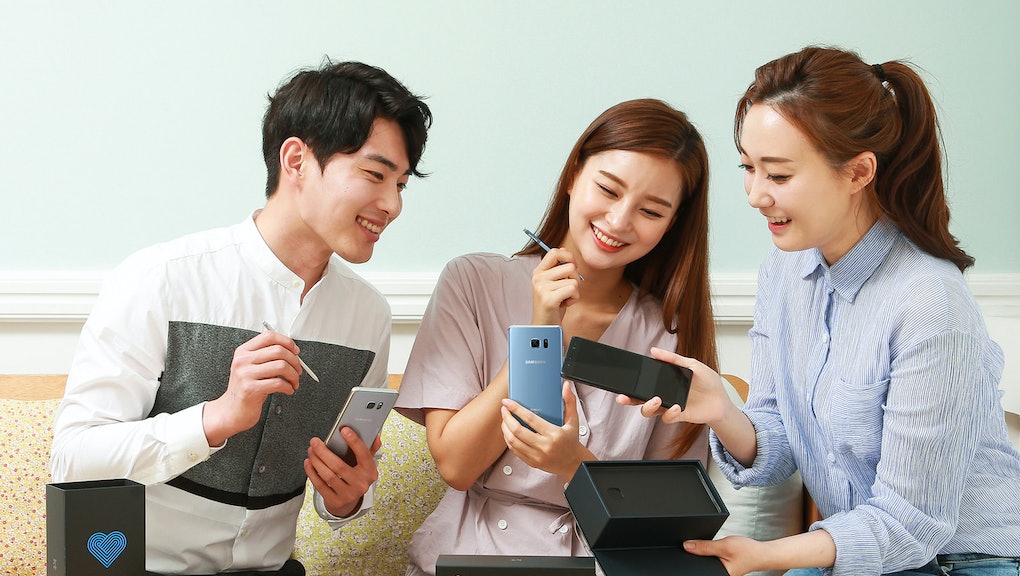 Samsung's Galaxy Note 7 is back as the "Fan Edition." Let's hope it doesn't explode.

Last year’s most notorious smartphone, the ill-fated Samsung Galaxy Note 7, is back. After being recalled and ultimately pulled off shelves when many units caught fire, the Note 7 has been repackaged as the “Galaxy Note Fan Edition” and is hitting the South Korean market this week.

At launch, there will be only 400,000 units. These phones will have, according to Samsung, “perfect safety.” The smartphone will come with a 3,200 mAh battery, which is smaller than the ones in the fire-prone Note 7, and feature an updated software allowing for support of Samsung’s new digital assistant Bixby. The Note Fan Edition will retail for less: priced at 700,000 South Korean Won, which is $609, it’s roughly two thirds the cost of the original device.

After debuting the Note 7 in August 2016, Samsung issued a voluntary recall in September following several reports of the device overheating and catching fire. The self-imposed recall, which was followed by an air travel ban by the Federal Aviation Administration and an official recall by the U.S. Consumer Product Safety Commission, affected 2.5 million Note 7s across 10 countries. But when replacement devices were found to have battery issues as well, Samsung discontinued the smartphone entirely. The debacle cost Samsung $5.4 billion in operating profit and damaged its reputation around the world.

The company released a formal apology to U.S. consumers in print editions of the New York Times, the Wall Street Journal and the Washington Post. Gregory Lee, the president and CEO of Samsung North America, wrote in the statement published in the American papers:

A careful Note 7 investigation is underway and the findings will be shared when the analysis is complete. The process will be thorough and include some of the best independent technical experts in the world to help inform and validate our work. We will re-examine every aspect of the device, including all hardware, software, manufacturing and the overall battery structure. We will move as quickly as possible, but will take the time needed to get the right answers.

A team of 700 ran extensive tests on 200,000 phones and 30,000 batteries with the collective goal of getting answers about what went wrong. Samsung released a report in January identifying the root problem — there were allegedly two separate design and manufacturing battery defects from two suppliers: Samsung SDI and China’s Amperex Technology Ltd.

The report also outlined the measures the tech giant is taking to prevent similar mishaps in the future. One step, for instance, is an eight-point battery check that entails rigorous testing and an X-ray of handsets. Another is to use a team of expert third-party advisers, like professors from the University of Cambridge, the University of California at Berkeley and Stanford University.

As for the successor to the Note 7, Samsung mobile chief D.J. Koh told CNet in January that plans for the Note 8 are on. “I will bring back a better, safer and very innovative Note 8,” Koh said. According to a report from Reuters, citing an unnamed source close to the matter, the device will be announced next month ahead of the much-anticipated iPhone 8 debut at a launch event in New York City.