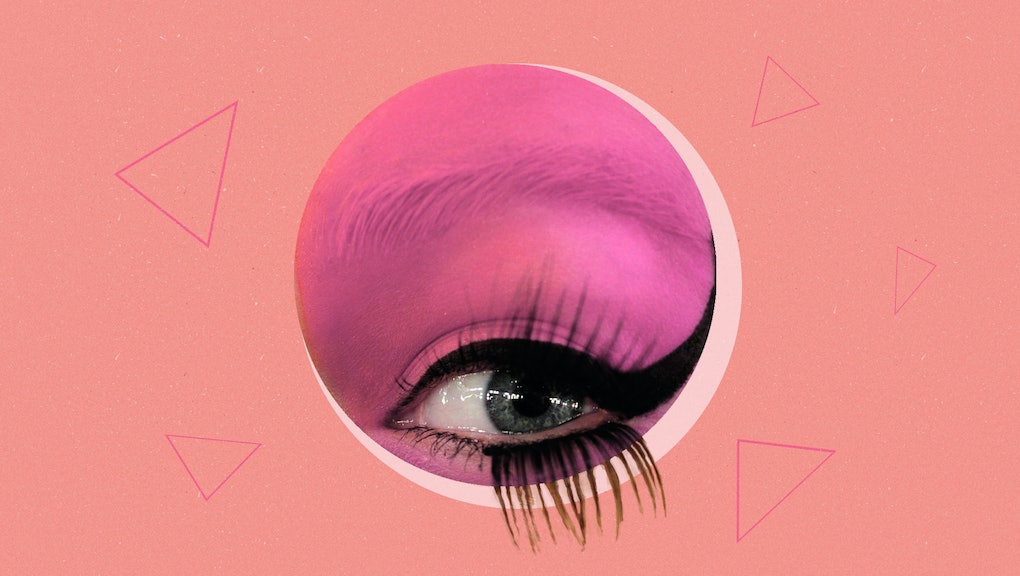 The truly bizarre history of fake eyelashes: From needles and human hair to Anna Nicole Smith

Look at a picture of a celebrity on a red carpet or any selfie posted by a makeup artist on Instagram and you’ll probably see it. There it will be, hidden under coats of mascara and camouflaged in an effort to make it look natural. There it will be, making the lashes look as though they naturally extend to the heavens: a pair (or maybe two) of fake eyelashes.

It’s an entirely mainstream beauty ritual now, but when you think about it, it’s so weird. Why would anyone glue a string of fake eyelashes onto their real ones?

It got us thinking, and as it turns out, fake eyelashes have a long and rather tortured history that goes all the way back to ancient Rome. Sure, the people you know who love to wear them — Kim Kardashian, any good drag queen — pull it off with ease, but at times it was a look that could, quite literally, kill.

A weird and painful beginning for falsies

Unfortunately, we must start this history with a bit of grossness. To understand why fake eyelashes were even created, we must first break down why long lashes were seen as an alluring feature in the first place.

At its core, this obsession with longer lashes stems from the idea that lashes get shorter with age. In ancient Rome, author Pliny the Elder helped make long lashes even more enviable when he posited they were linked to being chaste. “Eyelashes fell out from excessive sex, and so it was especially important for women to keep their eyelashes long to prove their chastity,” Pliny claimed, incorrectly of course. As a result, women strived to have the longest lashes possible.

In the 1800s, hundreds of years after Pliny made that assertion, lashes came into favor again — and this time, shit got real. In 1899, for instance, there were accounts of women having lashes implanted into their eyelids via needles, according to Racked. And yes, it was a popular procedure, even in capitals like Paris. Around this time, the more faint of heart attempted to glue human hair to their eyelids instead of threading it, but the method wasn’t too successful and the hair often fell off.

If only they’d known that in 20 years or so, they’d get some of the lash innovation they really needed.

1910s: It’s all because of a Hollywood director, or so the story goes

There’s a bit of a fight over who really created the kind of false eyelashes we know and love today.

In 1911, a Canadian woman named Anna Taylor first patented artificial lashes, using a crescent of fabric implanted with itty bitty hairs. In 1915, Karl Nessler, a hairdresser known for his permanent waves, opened a hair salon in New York and sold lash services, promoting false eyelashes at his salon as, according to the New York Times, “a guard against the glare of electric lights.” He also hired chorus girls to sell them and bat their lashes at customers.

But it wasn’t until 1916 when falsies started to become truly popular, and it was all because of a picky Hollywood director. D. W. Griffith was filming Intolerance with actress Seena Owen when he took one look at her in Babylonian attire and thought, “Something is not right.”

Reportedly, Griffith wanted Owen’s eyelashes to be “supernatural” and practically “brushing her cheeks,” so he ordered the film’s wigmaker to glue lashes made of human hair onto Owen’s own eyelids using spirit gum. Of course, this kind of ended in disaster, with Intolerance costar Lillian Gish writing in her memoir: “One morning she arrived at the studio with her eyes swollen nearly shut. Fortunately, Mr. Griffith had already shot the important scenes.”

In other words, the technology wasn’t exactly great.

“When a fair young thing looks at you mistily through her long, curling lashes, do not fall for it until you investigate,” a columnist wrote in 1921, according to the Times. “The long, curling eyelashes may not be hers, except by right of purchase.”

You’d think, just by reading that, that false eyelashes were some kind of Venus flytrap or torture device. Plenty of people were still skeptical of false eyelashes in the 1920s, but it was a different story among the fashionistas. Through the 1930s, Vogue gave them their stamp of approval with ads featuring more artful fake lashes, some laden with gold and platinum beads, Racked reported.

Quite naturally, Hollywood starlets in the 1940s and ’50s loved a good fake eyelash, with women like Marilyn Monroe and Rita Hayworth wearing them in photo shoots to make their eyes look larger and more, well, eye-catching.

What made them a generally better product in the 1950s was the introduction of plastic materials fit for fake eyelashes. No longer were lashes made of human hair and/or fabric, but durable thin plastic — which is how some are still manufactured today.

While the 1940s and ’50s were all about glamour, the 1960s makeup aesthetic was more adventurous, innovative and young. One person at the center of this movement, of course, was the model Twiggy, whose signature look included large lashes that accentuated her already prominent eyes. Though the most iconic images of Twiggy showed her with lashes painted directly onto her face, she wore plenty of fake eyelashes, too.

Other models at the time followed Twiggy’s lead, like Jean Shrimpton and Penelope Tree, who frequently appeared in the pages of Vogue and Harper’s Bazaar, showing women across the globe just how extreme their beauty looks could be.

There’s no real explanation for this — other than that fads come and go — but the 1970s and ’80s weren’t major decades for false eyelashes. Makeup of the 1970s was much more muted and natural, and in the 1980s, things like blush and dark lipstick were more popular than massive lashes.

Some women, like Cher, did continue to wear them, as she would.

Starting in the 1990s, fake eyelashes roared back into popularity. For women like Anna Nicole Smith, Pamela Anderson and model Cindy Crawford, eyelashes were an easy way to achieve a sort of retro/bombshell 1950s glamour with, quite literally, the blink of an eye.

2000s to present: Eyelashes get fancy and totally mainstream

In the 2000s, fake eyelashes got a very fancy — and very expensive — makeover. Jennifer Lopez wore fake eyelashes made of red fox fur to the 2001 Academy Awards; in 2004, Madonna started wearing a $10,000 pair of mink and diamond lashes to promote her Re-Invention tour.

With lashes worn by some of the world’s most famous women, they eased into the mainstream. Fake eyelashes are now sold anywhere makeup is, from Walmart to Nordstrom and everything in between. They’re currently embraced by nearly every celebrity on a red carpet, and drag queens, too, with the goal of looking as glamorous as possible.

With a history so dark and dangerous and an application so strenuous, it’s astounding that fake eyelashes are so popular. But here we are.