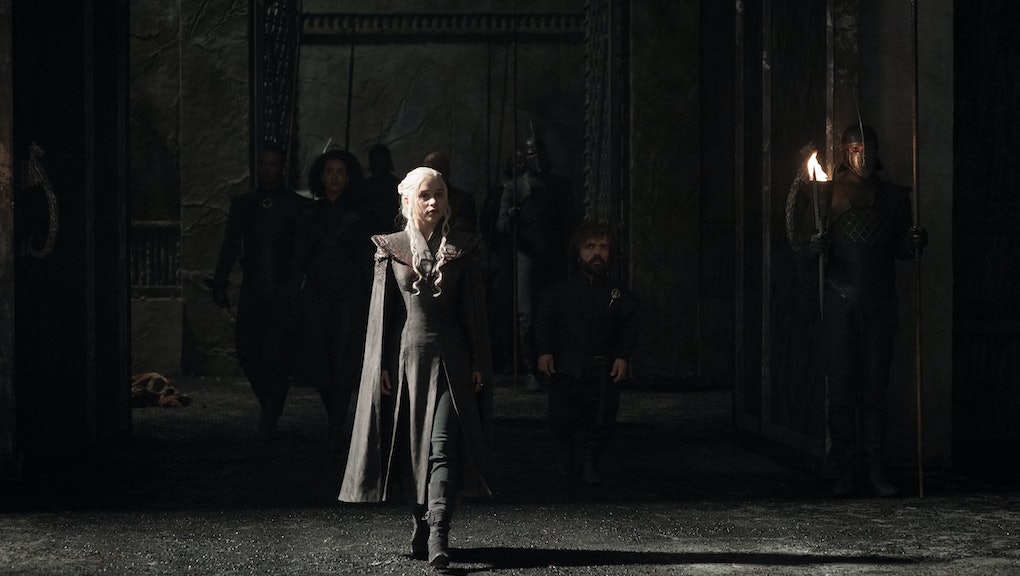 The true villain of ‘Game of Thrones’ may be Daenerys Targaryen

With Game of Thrones returning for just two more shortened seasons on HBO, the show narrows its scope to the most important players in Westeros: Jon Snow, Daenerys Targaryen and Cersei Lannister, who were the centerpieces of season seven’s first trailer (along with the Night’s King). But as we’re reaching the series’ endgame, it’s hard to discern what the next signature George R.R. Martin twist — e.g., the Red Wedding, Oberyn’s skull-crushing and Ned Stark’s death — could be.

We’re reaching, dare I say, fairly predictable territory for Game of Thrones’ standards. For narrative purposes, one would surmise the White Walkers will soon go south of the wall, otherwise they’re not much of an existential threat to humanity. Daenerys needs to find a suitable bachelor in Westeros, which has very slim pickings to begin with, so meeting and potentially courting Jon Snow, the new King in the North, also feels inevitable; cue the Fire and Ice puns. Westeros’ budding serial killer Arya Stark? She’s gonna kill people.

I’m not trying to say Martin or showrunners David Benioff and D.B. Weiss are running out of ways to surprise the viewer (who among us could’ve imagined the heartbreaking truth behind Hodor’s name?), but the show’s next twist might be staring us right in the face.

Could it be that Daenerys is the ultimate villain of Game of Thrones?

It might not be as explicitly telegraphed as Walter White’s transformation on Breaking Bad, but lay aside Dany’s likability (plus her really dope dragons) and consider what she’s been doing over the past couple of seasons.

She’s branded herself as a liberator of oppressed people by conquering the individual cities that comprise Slaver’s Bay. But not only has she failed to keep these cities under her control — when she goes to Meereen, slavery in Yunkai is re-established — but the people she rules essentially attempt a coup. If it wasn’t for Drogon Ex Machina at the end of season five, she would’ve likely been murdered by the Sons of the Harpy in Daznak’s Pit.

The issue isn’t whether it’s better if the slave cities remained slave cities — it goes without saying, that’s reprehensible. But her most striking moments ruling Meereen are quite sadistic in nature. In season four, when the Meereenese crucify slave children as a threat to Dany, she responds by crucifying an equal number of noblemen once she takes over the city, despite Ser Barristan’s pleas for mercy; “I will answer injustice with justice,” she coolly responds. Revisiting that scene, it’s pretty disturbing. What starts out as a moment of joyous liberation — and the slaves chanting “Mhysa!” her way — ends with the anguished screams of the newly crucified Meereenese across the city.

Fast forward to season five, when Ser Barristan is unceremoniously murdered in an alley by the Sons of the Harpy, Dany rounds up Meereen’s elected leaders to interrogate them and find out who among them could be a secret Harpy. To establish she’s not fucking around, she picks one of them at random to be burned alive and subsequently eaten by two of her dragons. She’s not just content with her decision; despite not getting any answers, Dany’s entranced by the sight of her dragons and the burning fire.

Dany’s fascination with fire — not to mention her nonchalant attitude toward violence — bears an uncomfortable resemblance to her father, the “Mad King” Aerys Targaryen. If you dig into the Mad King’s history, he wasn’t always a maniacal ruler. It was a slow descent into insanity that eventually culminated in the grisly deaths of Ned Stark’s father and brother, and ultimately Aerys’ own murder by Jaime Lannister. In other words: It didn’t happen overnight.

The Dany we meet at the beginning of the show — a regal but soft-spoken girl who’d just been sold off to a Dothraki ruler by her very shitty brother, Viserys — isn’t the one that projects villainy. But even at the start, we’re reminded of the Targaryens’ troubled history as rulers and the idea that there’s a 50% chance a Targaryen ruler would be brazen and cruel, like their father. These forewarnings felt like a cautionary tale for Viserys, so impatient to sit on the Iron Throne that he threatens a dude built like 1980s Arnold Schwarzenegger and expects to walk away unscathed (he doesn’t).

But it’s Dany who’s now presenting those warning signs. She nails people to stakes instead of showing mercy, feeds a potentially innocent man to her dragon and in a season that features some very brief Mad King flashbacks, sets an entire Dothraki hut on fire as she stands inside (“Burn them all!”).

The season six ending, in which Dany at last sails her Dothraki army toward Westeros, also brings up a big question: Would Dany’s return actually be good for the realm? She offers a fairly similar vision of Westeros to the Dothraki that her late husband Khal Drogo did back in season one, but for the common folk of Westeros, that would likely mean their homes and livelihood being destroyed by nomadic invaders with a penchant for violence.

Martin has been interested in subverting the tropes of traditional fantasy stories since the onset of the series. The incumbent heroes of the story (Ned, Robb and Catelyn Stark) are swiftly murdered. Westeros’ chivalrous knight in shining armor is a woman often demeaned for her bulky appearance (Brienne of Tarth). The most capable person in the realm is often undercut by his physical shortcomings (Tyrion Lannister). Even Jon Snow’s relatively straightforward underdog story hits a snag when he is killed by his own men — though yes, he comes back to life.

Which brings us back to Dany. She’s followed a similar trajectory to Jon Snow — one can intimate the name of the book series, A Song of Ice and Fire, is literally referring to them — but without much in the way of narrative twists. Sure, her husband has died and she’s lost some loyal servants, but for the most part Dany has trudged through the Seven Kingdoms with her dragons in tow, leading up to her heading to Westeros to claim what is hers by right as she’s announced she would from the story’s onset. It seems far too neat by Martin’s standards to expect her to just reclaim Westeros and use her fire-breathing dragons to quell the impending White Walker threat.

Martin, along with showrunners David Benioff and D.B. Weiss, may be using Dany’s charm and our bottomless appetite for awesome-looking CGI dragons doing dragon things to hide viewers and book readers from an uncomfortable truth. If and when the White Walkers are defeated, would Westeros actually find peace under Dany’s rule — or would it be swapping one “Mad Queen” in Cersei Lannister for another?

Mic has ongoing Game of Thrones coverage. Follow our main GoT hub here.