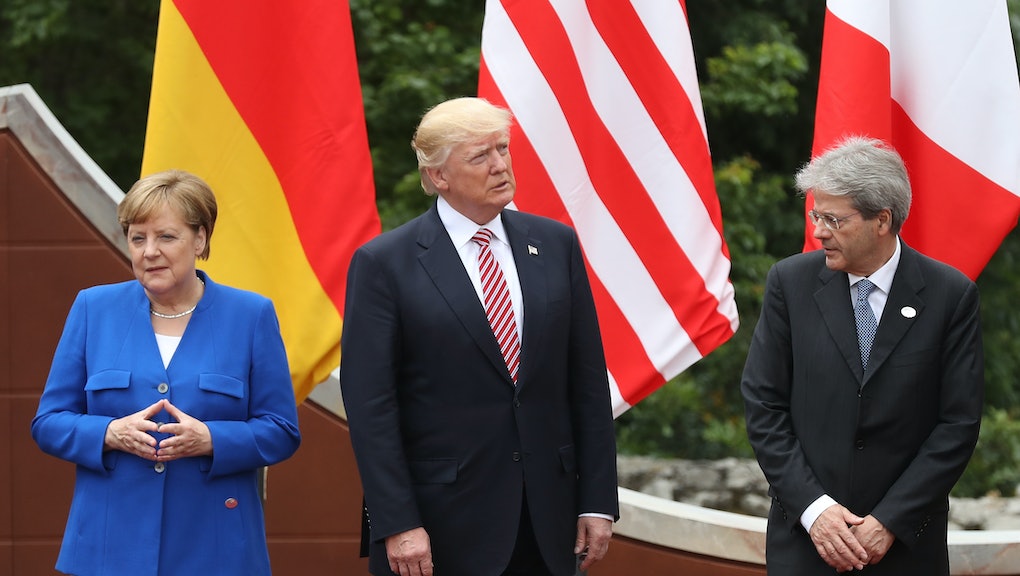 Here’s a history of Donald Trump’s brief, but tumultuous, relationship with Angela Merkel

President Donald Trump will soon cross paths with German Chancellor Angela Merkel once again, as the president heads off to the G20 summit in Hamburg, Germany.

This will be the third time the leaders have met in person, following Merkel’s March visit to the White House and the G7 summit in May.

Though the two shared an “extensive” phone conversation on Monday about the G20 summit, their upcoming meeting may prove an awkward one. Merkel said at a recent press conference that there would be “a whole series of thorny issues” at the G20 meeting and acknowledged the two countries’ differences.

“We know the positions set out by the American government and I do not expect that these positions will be laid aside because of a two-day trip to Hamburg,” Merkel said, as quoted by Deutsche Welle.

Reuters also reported that election materials released on Monday by Merkel’s Christian Democratic Union party now no longer refer to the U.S. as a “friend” of Germany, instead calling the U.S. Germany’s “most important partner” outside of Europe.

The party’s election materials in 2013, conversely, described the U.S. as the country’s “most important friendship” and said the two countries’ friendship was a “cornerstone” of Germany’s diplomatic relations.

Of course, strained relations between Merkel and Trump are nothing new. Tensions between the two leaders date back to Trump’s presidential campaign — and they haven’t gotten any better since.

Trump has taken aim at Merkel since his days on the campaign trail. Though the then-candidate first praised Merkel as “probably the greatest leader in the world today” in an interview with Time in August 2015, Trump quickly changed his tune, criticizing the leader’s “insane” handling of refugees in October 2015 and tweeting in December that she was “ruining Germany.”

Merkel, meanwhile, first offered a subtle criticism of Trump following his election, in which she promised “close cooperation” with the U.S. would be contingent on the two countries’ “shared values” — some of which stand in stark contrast to Trump’s divisive comments during his campaign.

“Germany and America are bound by common values — democracy, freedom, as well as respect for the rule of law and the dignity of each and every person, regardless of their origin, skin color, creed, gender, sexual orientation or political views,” Merkel wrote in a letter to Trump following the election, as quoted by ABC News. “It is based on these values that I wish to offer close cooperation, both with me personally and between our countries’ governments.”

Merkel first openly clashed with Trump soon after he took office, criticizing Trump’s travel ban on majority Muslim countries and calling him to explain the Geneva Refugee Convention, which requires countries to take in refugees.

Though she agreed the fight against terrorism is “essential,” Merkel said following Trump’s executive order that it “in no way justifies general suspicion against people of a specific faith, in this case people of the Muslim faith or people of a certain background,” according to Radio Free Europe.

“In my opinion, this act runs contrary to the basic principles of international refugee help and international cooperation,” Merkel said.

The two leaders’ relations did not improve when they met in person at the White House in March.

In addition to their awkward handshake moment, their meeting was marked by a series of disagreements and tense exchanges, such as when Trump said that the two “at least had something in common, perhaps,” when it came to his claims that former President Barack Obama had wiretapped him.

During the meeting, Merkel also reportedly had to explain to Trump 11 times that the U.S. negotiates trade deals with the European Union and not Germany specifically, after the president tried to negotiate such a deal.

G7 Summit and its aftermath

The two leaders next met at the G7 Summit in May, during which Merkel and Trump reportedly clashed over disagreements about German trade and climate change, according to the New York Times.

“The whole discussion about climate was very difficult, not to say unsatisfactory,” Merkel said about the summit, the Times reported. “There’s a situation where it’s six, if you count the European Union, seven, against one.”

Following the president’s European trip — which Trump declared on Twitter was a “great success for America,” despite a series of faux pas committed by the president — Merkel expressed her disappointment and said Germany could no longer rely on the United States.

“The times in which we could completely depend on others are, to a certain extent, over,” Merkel said at an election rally in Munich, as quoted by the Guardian. “I’ve experienced that in the last few days. We Europeans truly have to take our fate into our own hands.”

Merkel stood by her March comments in an interview published on Wednesday with Die Ziet, according to ABC News. When asked if she would repeat those comments today, she responded, “Yes, exactly that way.”

Following the summit, Trump criticized U.S.-German trade on Twitter, saying that the U.S. has a “massive trade deficit with Germany” and promising “this will change” — though White House press secretary Sean Spicer nevertheless insisted that the two leaders had an “unbelievable” relationship.

“I think the relationship that the president has had with Merkel he would describe as fairly unbelievable,” Spicer claimed on May 30, as quoted by Politico. “They get along very well. He has a lot [of] respect for her.”

Most recently, the two leaders’ relationship has been tested by Trump’s decision to withdraw from the Paris climate accord, which Merkel described as “extremely regrettable” — a phrase, she acknowledged, was her expressing herself “in very restrained terms.”

Vowing that Trump’s decision “can’t and won’t stop all those of us who feel obliged to protect the planet,” Merkel continued: “To everyone for whom the future of our planet is important, I say let’s continue going down this path so we’re successful for our Mother Earth.”

Merkel further resisted Trump’s rejection of the Paris pact by deciding that the upcoming G20 summit will focus on climate change, the Telegraph reported. In a speech to members of the German Parliament on Thursday, Merkel said she was “determined” to carry out negotiations about the agreement at the summit and “send a signal” to the United States.

“We can not and will not wait for the latest in the world to be convinced by the scientific evidence for climate change,” Merkel said, adding, “Anyone who believes the problems of this world can be solved with isolationism and protectionism is a making a huge mistake.”