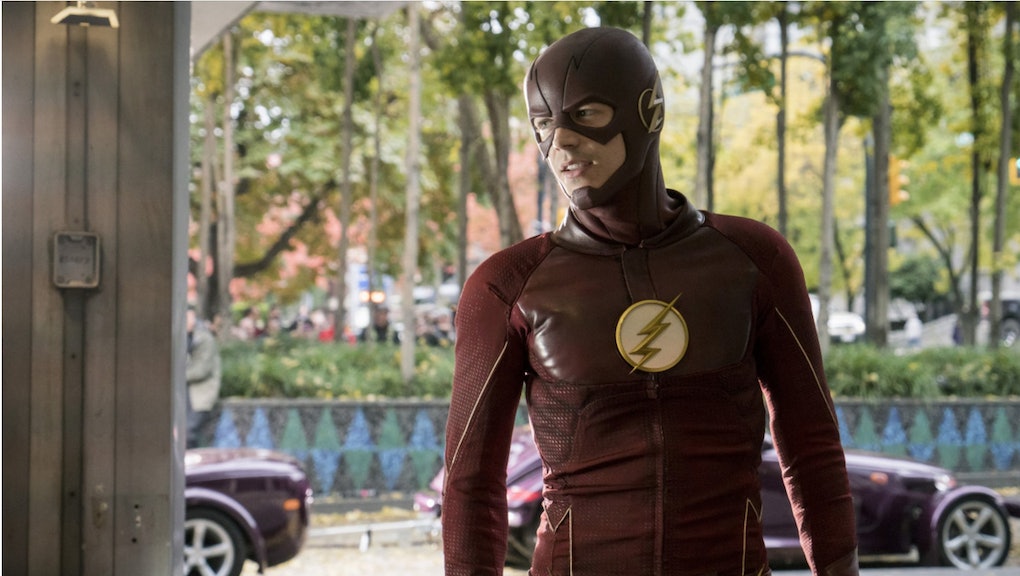 During the season three finale of The Flash, Barry Allen, played by Grant Gustin, agreed to enter the Speed Force (possibly indefinitely) as penance for creating both Flashpoint and his evil time remnant Savitar. Of course, it was never really a question that Barry would return for season four — you simply don’t write off the main character of the CW’s highest rated series. But how and when he would return was far less certain.

Considering Barry Allen had once been absent from the comics for more than two decades, it is possible that The Flash writers would play around with his absence for an episode or two, possibly promoting Wally West from Kid Flash to Flash. That seems unlikely now, as the series’ production office tweeted out what appears to be the title of season four’s first episode, and it very much hints at Barry’s return.

While the production office’s tweet (and actually its entire account) has since been deleted, Bleeding Cool has kept the pic alive via a screenshot. And assuming the image is to be believed, it looks like the season four premiere of The Flash is set to be titled “The Flash Reborn.” And considering the only Flash we know that needs to be “reborn” in any way is Barry, it is pretty safe to assume that he will be back sometime during season four’s first episode.

In the comics, Barry returned from the Speed Force during the 2008 “Final Crisis” crossover, but the nature of his reappearance wasn’t elaborated on until the 2009 six-issue storyline The Flash: Rebirth, written by Geoff Johns. And while the names are not identical, “The Flash Reborn” does seem to be a nod to The Flash: Rebirth, adding some fuel to the fire that the series will loosely adapt that storyline in season four.

Should The Flash’s writers look to Johns’ story for inspiration, it is possible that we may see yet another villainous version of Barry Allen — at least for a short period of time. Shortly after The Flash’s season three finale, Screen Rant speculated that Barry could return from the Speed Force as the Black Flash. It is not such a far-fetched thought, as shortly after his return in the comics, Barry does indeed transform into the character, because the previous Black Flash had been killed.

For those who need a refresher, the original Black Flash in the TV series was Hunter Zolomon, aka Zoom, who was transformed into the Speed Force’s grim reaper during the season two finale. Since then, he has reappeared in both The Flash and Legends of Tomorrow as a being that enforces the Speed Force’s rules: Basically, to stop speedsters from messing with time. But Black Flash is killed by Killer Frost in The Flash’s season three finale, leaving a less-than-attractive job opening for another speedster.

If The Flash: Rebirth is indeed serving as inspiration for season four, we very well could be seeing Barry take over the Black Flash mantle. Fans that do not want to see a version of Barry Allen as the series’ main villain for the second season in a row, though, probably can rest easy. Even if Barry does come back as Black Flash, it will likely be short-lived, as Clifford DeVoe, aka the Thinker, has been confirmed as season four’s big bad. Just do not be shocked if that occurs only after Barry causes some mischief of his own.