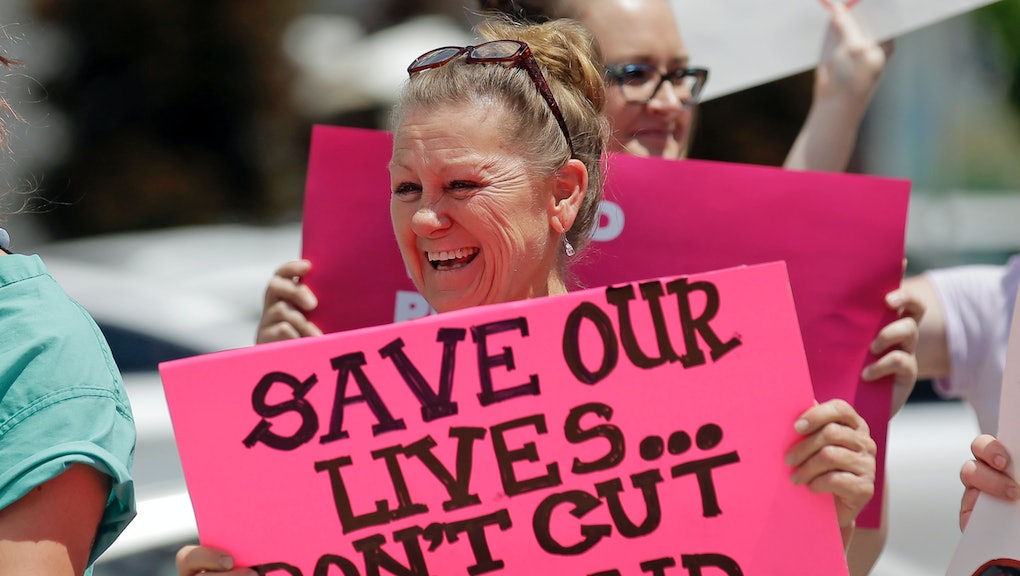 Back in May, the Republican-controlled House of Representatives caught everyone by surprise when they managed to pass their wildly unpopular health care bill. Now the left wing of the Democratic Party is willing to do whatever it takes to make sure the same thing does not happen in the Senate — and that means laying their bodies on the line.

A coalition of left-leaning and progressive groups will hold sit-ins Thursday in over 20 senators’ offices around the country with many protesters risking arrest.

The groups in the coalition overwhelmingly represent what some call the “Bernie wing” of the Democratic Party and the left. Our Revolution, the grassroots group that emerged out of Bernie Sanders’ 2016 presidential campaign, has taken a leading role. Other groups in the coalition include Democratic Socialists of America, the Working Families Party and #AllofUs, each of which has either explicitly or effectively been involved in trying to shift America’s left political coalitions even farther left.

Notably, many of the groups involved in the protest hail from the part of the left that is known for its willingness to criticize the Affordable Care Act’s shortcomings and openly advocate for moving the United States toward a single-payer health care system. That position was very recently considered by establishment Democrats to be at odds with the goal of protecting Obama-era health care reforms.

During the 2016 Democratic presidential primary, Hillary Clinton’s campaign attempted to create a binary choice between advocating for single payer health care and attempting to protect and improve the ACA.

A page from Clinton’s campaign website, still accessible today, boasts how she would “defend and expand,” the Affordable Care Act while Sanders’ plan for single-payer would require Congress to “start all over again and reopen this contentious debate.”

The dichotomy between defending the ACA and pushing for single-payer has continued to play out in intra-left online squabbles. But as Brian Beutler of the New Republic points out, those debates bely a “near-perfect unity” among on-the-ground activists over the idea that stopping the GOP’s ACA repeal bill is their No. 1 priority.

In Washington, the line between advocating single-payer and defending the ACA has also begun to fade, with a record number of Democrats signing up to support single-payer while also fighting ACA repeal.

And as public support for single payer continues to grow around the country, Democrats seem poised to coalesce around a new progressive health care agenda.