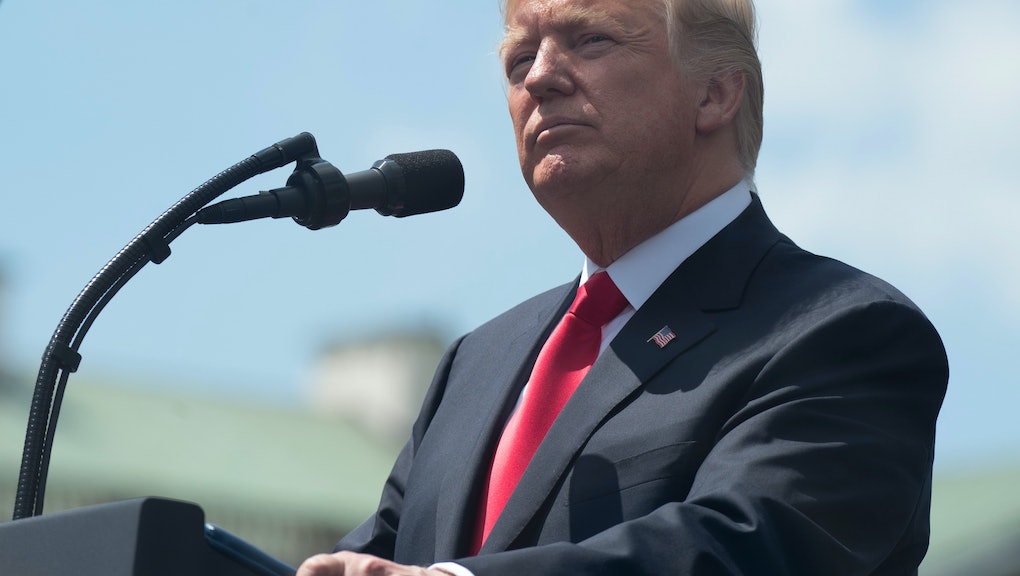 During an address in Warsaw, Poland, on Thursday, President Donald Trump called on Russia to “join the community of responsible nations,” and urged the country to “cease its destabilizing activities in Ukraine and elsewhere.”

Yet earlier in the day, Trump demurred on the opportunity to call out Russian President Vladimir Putin for meddling in the 2016 presidential election. Instead, Trump bashed the media and former President Barack Obama, and sought to poke holes in the intelligence community’s unwavering belief that Putin orchestrated a campaign to influence the race in favor of Trump.

What was the difference in the diverging remarks?

Trump’s tough talk on Russia came from a prepared speech he read via teleprompter — a tool he repeatedly bashed Hillary Clinton for using. His media bashing and attempt to delegitimize the intelligence community’s findings, on the other hand, came during an unscripted news conference with Polish President Andrzej Duda.

The contradictory messaging wasn’t lost on many watching the speech, who called Trump out for his lack of consistency. “It’s one thing to read paeans to free speech and the rule of law off a teleprompter,” Democratic consultant David Axelrod tweeted. “It’s another to honor and live by them as POTUS.”

It also comes a day before Trump is slated to have his first one-on-one meeting with Putin.

Trump’s own staff appears to be worried that unscripted Trump could cause problems in that meeting, given that Trump is facing an FBI investigation into his campaign’s alleged ties to Russia and has thus far not categorically condemned Putin’s election meddling.

If Trump emerges from that meeting offering concessions to Russia — such as calling for a lift on some of the sanctions on Russia for its illegal annexation of Ukraine or returning compounds to Russian officials in the U.S. — the optics could lead to even more political problems for his White House.

“You don’t want to come out of there saying, ‘We’re friends, and the enemy is the deep state and the media,’” Michael McFaul, a former ambassador to Russia, told the New York Times. “If it were somebody else other than Trump, you could imagine a tough conversation about Ukraine and election meddling, but that’s probably too optimistic.”