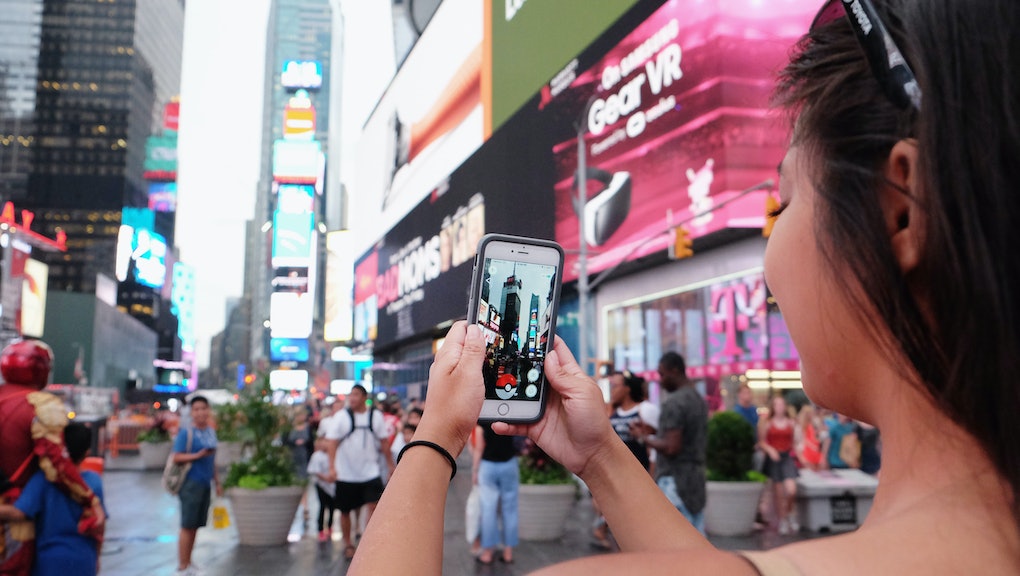 ‘Pokémon Go’ Anniversary: Niantic created a safe space for black female gamers — and I miss it

It’s an uncomfortably hot evening in Manhattan, and I just ran an almost sustained, full sprint for 1.5 miles, struggling to catch my breath. My face is drenched in sweat, my blouse hangs on my body as if it just won a battle against an iron and my long skirt is twisted so that the back-facing zipper now faces forward.

The neat topknot in my hair, which took 15 minutes to coif, resembles the explosion from a firecracker and, somewhere along the way, my contact lens popped out of my left eye, so half of my vision is in standard-definition resolution. And yet, I am overjoyed. It’s August and after seven attempts, and with 20 seconds to spare, I just caught a Dragonite, one of the strongest and rarest creatures in Pokémon Go.

For nearly seven months, that was the story of my life: a young, black, professionally dressed woman running across multiple avenues and tens of blocks to catch a digital pocket monster on an augmented-reality platform powered by my phone.

I was part of that inaugural force of people that made the mobile game into a movement; I invested inordinate amounts of time — and some money — into being the best. But I haven’t played the game since March, and I wonder if I should find my way back.

Pokémon Go was the first title I played in years that granted me a somewhat fearless experience in gaming. It allowed me to cast aside personal doubts, misgivings and assumptions about myself and other people. Not once was I judged for being an adult playing a “kids game” — there were no snide comments about me being a woman in a space that was occupied mostly by men.

The environment was devoid of racist remarks about me being a black player. The unchangeable aspects of myself — the parts of me that were always a “cause” for disruption in other games — weren’t factors among Pokémon Go players. I was just always a fellow player, to whom ridiculous questions like, “Do you want to run 12 blocks and three avenues with me to catch a Dragonite?” would be asked.

During my time playing regularly, the Pokémon-obsessed people of New York — comprised of scores of high school kids, financial analysts, journalists, artists, delivery service guys, somebody’s grandparents (seriously), entrepreneurs and more — became my second family. At first I felt I might have looked the most out of place, based on the fact that I was one of the few women in the streets playing this game who looked like me. But I quickly realized none of that mattered: Pokémon Go created an unlikely safe space in gaming that didn’t exist for me anywhere else.

None of the intersections of my personhood that would make me an immediate target — my race, my gender — in spaces like Xbox Live or PlayStation Network was even at issue — and, usually, I take a lot of precautions when gaming. Verbal abuse is a common reality for me, so I either put in extra time to work around any social aspects in games, or don’t play them at all. I don’t like subjecting myself to rampant racist and sexist aggression. So I’ll often avoid titles that require heavy teamwork unless I can either be effective on the team without using the voice chat or gather a squad of people I know in real life instead.

With Pokémon Go, I couldn’t do any of that: None of my friends who lived near me were interested, and my brother (who had played Pokémon Red and Blue when we were kids) lived four states away. I needed to actually talk to other gamers — the very thing I would normally avoid — to make any real headway into the game.

Pokémon Go brought my mother and I closer together, too. At first, I was shocked when I found out she had downloaded the game at all. She’d never crushed candies or angered any birds, but she became obsessed with catching Pokémon. For months, she would send me frenetic texts with screenshots, combing over the Pokédex entry of a new “Polygon” (Porygon) she caught, or expressing her fury upon not catching a “Whee-zah” (Wheezing). Once I got over her adorable mispronunciations, I began really hearing what my mom was saying: She was enjoying an activity that had been part of my own life since I was 5 years old.

Plus, my mom was doing everything she typically refused to do. Pokémon Go facilitated daily exercise and boosted her confidence to strike up conversations with her neighbors. At one point she told me she understood why her children had been so into gaming for so long. “I see now it’s not just a game,” she said. Her feedback sounded familiar, and it felt wonderful.

I’m not sure if I ever took the time to realize how much Pokémon Go affected me until I stopped playing it altogether. I played religiously up until winter barged in and, by then, the fatigue was setting in anyway. The very feature that made me love the game — physically visiting real-life locations to catch Pokémon — began to feel more like a nuisance in the bitter cold.

But what really changed everything for me was how the other Pokémon people vanished — the fellow gamers I’d been initially so reluctant to engage. The same people I would see every week stopped coming. We had all sort of hoped to start real relationships with the people we met through promised features like player vs. player battles and trading. But that never happened, and, as we tired of the game, we stopped keeping up. Even the introduction of the Johto Pokémon failed to bring back the magic that captured the city last summer.

In January I walked past a barren Grand Army Plaza in front of the Apple Store and I felt my face contort into a frown. For the first time in a long time, I deeply wanted to game with a group of strangers to catch Pokémon.

Check out the latest from Mic, like this essay about the sinister, subtle evils lurking in rural America that Far Cry 5 shouldn’t ignore. Also, be sure to read our review of Tekken 7, an article about D.Va’s influence on one Overwatchplayer’s ideas about femininity and an analysis of gaming’s racist habit of darkening villains’ skin tones.