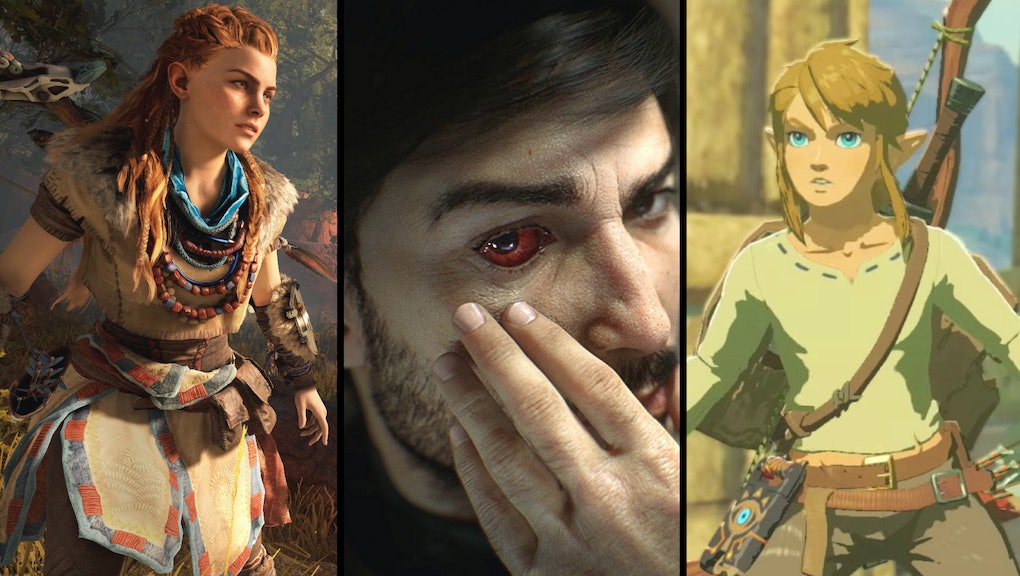 Unless you’ve got your finger on the pulse of the gaming industry, it’s easy to miss out on a whole host of stellar games. Don’t worry: We’ve done the hard work for you.

Below you’ll find a list of our nine favorite games from the first half of 2017, including everything from small, intimate meditations on the meaning of death to a melodramatic, high school drama about fighting demons. We’ve got it all, folks.

Nioh hasn’t received quite the amount of buzz as some of the other titles on this list, but if you’re in need of a challenging action game, it’s absolutely worth your attention.

It takes place in Japan, where you play as a white-haired, demon-slaying warrior. Here, strategy and smart timing is just as important as your twitchy reflexes. Think of it like Dark Souls meets Ninja Gaiden. Don’t expect to get by on button mashing alone.

If you’re game for a bit of lofty, cerebral, posthumanist, Japanese anime nonsense, Nier: Automata is the game for you. It sounds like I’m poking fun at it — and, in a way, I am — but Nier: Automata is truly one of the strangest, most compelling action games to come out in a long while.

You play as 2B, an android tasked with cleaning up a robot-infested Earth that humanity was forced to abandon. It’s bombastic, depressing, ambitious and inventive in really surprising, genre-defying ways. Don’t miss it.

Despite what you’ve heard about Mass Effect: Andromeda’s janky facial animations, the game itself a solid, gorgeous sci-fi RPG that would likely have gotten much more praise if expectations weren’t so unreasonably high.

See, the original Mass Effect trilogy is one of the most beloved video game series of all time, so the stakes were high for BioWare to knock Andromeda completely out of the park. Is it perfect? Absolutely not. But there’s no denying it’s a competent, engaging interstellar adventure filled with compelling characters and a slick combat system that’s fast and explosive — literally, if you’re doing it right.

This one’s a bit of a cop-out, since it’s technically not really a new game — it’s just a repackaged version of Mario Kart 8 for Wii U with all its downloadable expansions included. But, even with all that counting against it, Mario Kart 8 Deluxe still deserves a spot on this list.

Simply put, Mario Kart 8 Deluxe for Nintendo Switch is one of the best looking, slickest racing games of the past few years — and it’s undoubtedly the best in the series, despite what some of us here at Mic allege.

If high school were a video game and also involved going into demon-infested dungeons generated by people’s psychological torment, it’d be Persona 5. That made sense, right?

No, but really, Persona 5 is a stellar Japanese RPG that stylishly melds real-world teen melodrama with over-the-top, fantastical action — and it’s charming as hell. No need to worry if you haven’t played Persona one through four. Persona 5 is a completely standalone story with brand-new characters.

4. What Remains of Edith Finch

If What Remains of Edith Finch were a movie, you’d find it at Sundance, not on the big screen up against the Spider-Man: Homecomings of the world. It’s a smaller, more emotionally intimate experience than you might be used to from a video game, but don’t let that scare you away.

In short, What Remains of Edith Finch puts you in the shoes of the eponymous character as she sorts through the belongings of all her deceased family members. As she does so, you’ll experience memories from the points of view of her family, allowing you to play through the moments leading up to each person’s death. You can read our full review here.

If you put BioShock and the Alien movies in a blender, you’d get Prey, the thrilling new sci-fi thriller from the makers of Dishonored.

In it, you’ll play as Morgan Yu, the lone inhabitant of the space station Talos I. Well, “lone” isn’t really accurate, because the station is crawling with creepy, shadow aliens called Mimics that are all too eager to disguise themselves as a coffee mug and then rip your face off when you’re least expecting it. Read our full review here.

Horizon Zero Dawn isn’t the most original, groundbreaking game we’ve ever played, but it remixes and combines elements of so many others — like Tomb Raider, Legend of Zelda and Uncharted — iterating on them and creating something unbelievably slick and polished.

In it, you play Aloy, a member of the matriarchal Nora tribe, seeking answers about the increasingly violent, corrupted race of dinosaur-like machines that inhabit the ruins of this post-apocalyptic world. So, even though Horizon Zero Dawn technically takes place in the far future, humanity lives a decidedly untechnological lifestyle, hunting with bows, arrows and spears instead of guns.

1. Legend of Zelda: Breath of the Wild

You had to know this one was coming, right? There’s simply no way you’ve gone about your life up until now without hearing someone — a sibling, a coworker, anyone — geeking out about the new Legend of Zelda. And for good reason, it’s incredible.

Unlike so many other Legend of Zelda games, Breath of the Wild doesn’t present a series of temples that require you to throw your most recently acquired items at them over and over again. You can complete the game’s objectives in quite literally any order, so there’s not just one way to solve anything. If you want, you can spend dozens of hours just completing side quests and exploring its gorgeous, diverse landscape, ignoring the majority of the main story altogether. There’s no “right” way to play.

In short, Breath of the Wild is a refreshing twist on an iconic series that had grown all-too familiar — but even if it were a standalone game, it’d hands-down be the most impressive one we’ve played all year.