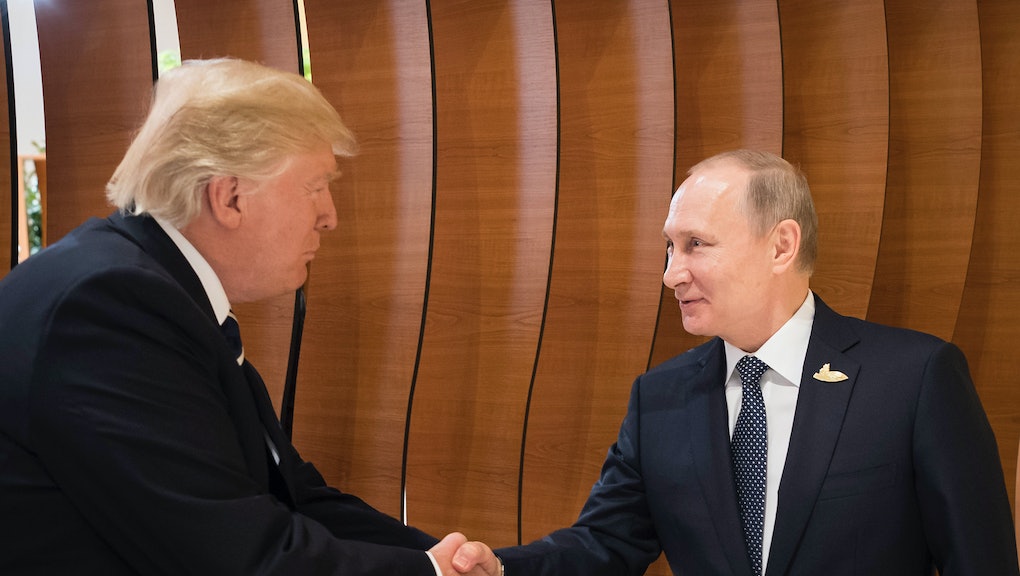 This is Mic’s daily read on Donald Trump’s America. Welcome to the political newsletter that would love to be a fly on the wall in the Trump/Putin meeting.

Today: Trump could split with his fellow G20 attendees on these four issues.

Even more: Nearly 50 people were arrested during #SitInSaveLives protests.

4 areas where Trump may break with the G20

All eyes are on Hamburg, Germany, as leaders of the world’s 20 largest economies have gathered to discuss global priorities. The G20 Summit is typically a dry political meeting that focuses on high-level policy. But this year, President Donald Trump could make the meeting more notable by breaking further from traditional U.S. relationships with other countries.

The priorities for the meetings Friday and Saturday include working on free trade, climate change and more — areas where Trump has already shown a stark departure from the past. Here are four areas where he could further break with many U.S. allies at the meeting.

1) Free trade: Using the G20 to highlight the benefits of increased global trade is a key goal this year for German Chancellor Angela Merkel. “We must not allow globalization’s positive impact on prosperity to be diminished by isolation and protectionism,” her administration wrote as it laid out the priorities for the meeting.

That is deeply at odds with Trump’s longtime opposition to increased free trade. Trump frequently argues that deals like the North American Free Trade Agreement have hurt the U.S. economy, while countries like Mexico and China have grown in wealth at the expense of the United States. In his latest anti-trade move, Trump is considering placing tariffs on steel imported into the United States.

2) Climate change: Merkel placed a focus on combating climate change atop the agenda for this year’s G20 Summit. That may do little to engage Trump.

Since taking office, Trump has aggressively rolled back Barack Obama’s legacy on climate change. The Environmental Protection Agency has rescinded rules protecting clean air and water. The agency now openly doubts the human impact on climate change. Trump pulled the U.S. out of the Paris climate agreement, which aims to reduce CO2 emissions, and has still not stated definitively whether he believes in climate change or believes humans play a role in changing the climate — but his Twitter history precedes him.

Trump has made it more difficult for refugees to enter the United States. His recently implemented travel ban places a three-month moratorium on travel between six Muslim-majority countries and the U.S. It also restricts the number of refugees the U.S. will accept and where they can come from. Trump, of course, continues to stress the need for a wall on America’s southern border.

4) Banking regulations: Nearly a decade since the beginning of the financial crisis driven by the collapse of American investment banks, Merkel also placed a focus on government oversight of major financial institutions.

Trump’s advisers are stacked with former Wall Street executives who do not believe increased regulation will benefit banks or the country. Last month, Treasury Secretary Steven Mnuchin, a former hedge fund manager, unveiled a plan to reduce regulations on Wall Street trading, reduce the power of a financial consumer watchdog and ease tests of bank stability. Earlier in his presidency, Trump took aim at regulations that required banks to explain how they could be broken up if they fail and which banks should face greater government oversight.

Today’s question: Is it right for Donald Trump to meet with Russian President Vladimir Putin? Email your thoughts to trumpsamerica@mic.com.

The meeting you’ve been waiting for

Trump will meet with Putin on Friday, the first meeting between the two since Trump’s election. (It may not be their first ever meeting, though Trump now claims it will be.) The meeting will be small, with only Secretary of State Rex Tillerson, Russian Foreign Minister Sergey Lavrov and translators in the room. Trump apparently has only a small agenda for the meeting that stretches “a few pages.” The talking points are brief and a sentence or two to keep Trump on-point during the half hour meeting.

Here are six questions we have going into the meeting. Watch the two leaders’ first handshake here.

If the Senate health care bill dies, Senate Majority Leader Mitch McConnell (R-Ky.) is already saying the GOP will have to do something to keep health insurance exchanges from collapsing.

How Vice President Mike Pence is being weighed down by the criticism directed at Trump’s voter fraud commission.