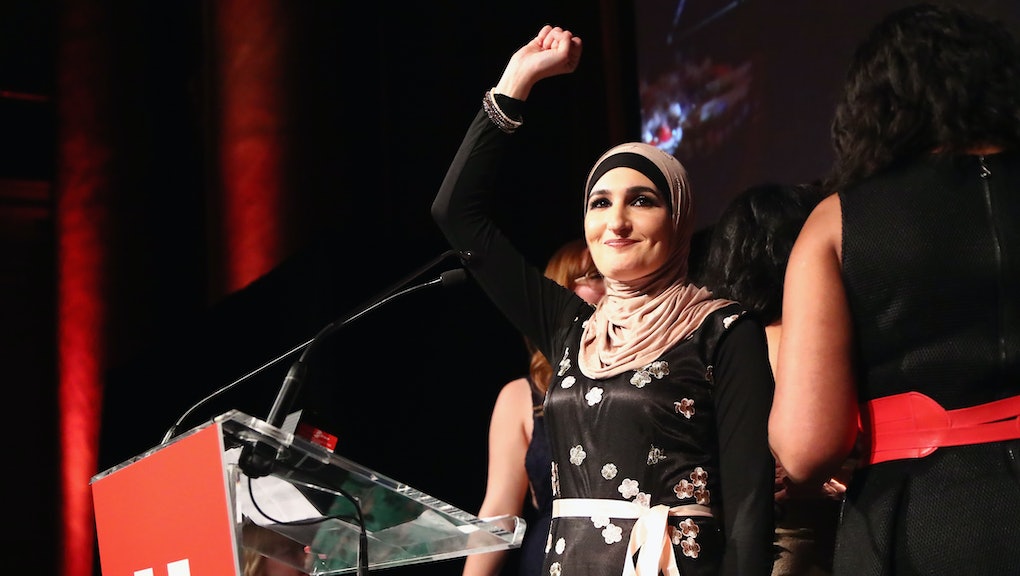 What is “jihad”? Conservatives often link it to violence, but here’s what it actually means.

Muslim activist Linda Sarsour is a common target for conservative media and right-wing activists. The latest charge against Sarsour follows a speech the Women’s March organizer delivered to the Islamic Society of North America convention in Chicago that was held from June 30 to July 3.

Below is a transcript of part of her speech, which can be watched in full here:

There is a man who once asked our beloved prophet ... has said to him, “What is the best form of jihad or struggle?”

And our beloved prophet ... said to him, “A word of truth in front of a tyrant or leader, that is the best form of jihad.” I hope, that when we stand up to those who oppress our communities, that Allah accepts us as a form of jihad, that we are struggling against tyrants and rulers not only abroad in the Middle East or the other side of the world, but here in the United States of America, where you have fascists and white supremacists and Islamophobes reining in the White House.

In her speech, Sarsour called on fellow Muslims to resist fascism, white nationalism and Islamophobia. She invoked a saying from Prophet Muhammad about the concept of “jihad” and its honorable form.

But to those in the right-wing faction, Sarsour was seemingly calling for a violent jihad against the Trump administration. Conservative Review wrote that Sarsour’s use of jihad is “a particularly vague, yet terrifying, segment of her speech.” Fox News clarified her use of the term jihad, but tagged the piece as “outrageous.” Breitbart attempted to provide more information in their piece: “The context of Sarsour’s remarks indicate that she meant a jihad using words,” the article read. “However, the term has also been used to describe violent struggle, including terrorism, against non-Muslims or against governments described as enemies.”

President Donald Trump’s son, Donald Trump Jr., quote tweeted the Fox News piece on Sarsour, and called on the Democratic National Convention to disavow and condemn Sarsour, who was a delegate at the convention. Sarsour defined jihad as a means of nonviolent resistance, but some people have gone so far to make death threats against her as well.

In an op-ed for the Washington Post on Sunday, Sarsour responded to the outrage and noted that conservatives and anti-Muslim individuals have lashed out at her because she is their “worst nightmare”: a Muslim, Palestinian-American woman activist. She also pointed out how the term “jihad” has been hijacked from both Muslim and right-wing extremists.

“This term has been hijacked by Muslim extremists and right-wing extremists alike, leaving ordinary Muslims to defend our faith and in some cases silenced,” Sarsour wrote. “It sets a dangerous precedent when people of faith are policed and when practicing their religion peacefully comes with consequences.”

The Arabic translation for jihad is “to struggle” or “to strive.”

Corey Saylor, the director of the Department to Monitor and Combat Islamophobia at the Council on American-Islamic Relations, said Muslims use jihad in a sense of “improving themselves religiously.”

“[Jihad] is a struggle against themselves or desires,” Saylor said in a phone interview. “For example, my jihad this year was to fast the 30 days of Ramadan. My jihad is to do a good deed every day. My jihad is to make sure I pay charity on time.”

But, as evidenced by the outrage over Sarsour’s use of the word, the non-Muslim understanding of jihad is at odds with the way Muslims view the terminology. Saylor said that’s because the Islamic term has been co-opted from how most Muslims understand it to a far more violent interpretation by Islam’s most radical believers. For example, Osama bin Laden and the Islamic State both have claimed that their terrorism attacks are an act of “jihad” against the West and its imperialism. In turn, conservative media and right-wing activists have used bin Laden and ISIS’ calls for “jihad” to stir up anti-Muslim animosity.

Ryan Lenz, a senior reporter for the Southern Poverty Law Center’s Intelligence Project, said in a phone interview that “language has been central to hate in America.”

“The reality is, despite what words mean, it’s clear that the radical right in the U.S. and the giant Islamophobia industry has used its contemporary cultural definitions of those terms [like “jihad”] to vilify the entirety of Islam,” Lenz said. “In some respects, world events helped them do that.”

He mentioned that since the beginning of President George W. Bush’s “war on terror,” Americans have culturally equated “terror” to Islam, Arabs and the Middle East.

“Jihad is being defined within the last 16 years of the war on terror to mean Islamic terrorists waging war on the West,” Lenz said. “That’s an issue that is gripped at the very heart of what Islam and its followers are fighting against. And to those terrorists, jihad means waging war.”

How conservatives have criminalized “jihad” in recent years

While the Quran does include “jihad” in the militant sense, it is only asked to be used as a very last resort and only done so in the cause of God — which is to help those who are marginalized, weak or ill. When it comes to military conflict, Prophet Muhammad strictly condemned any act of aggression against women, children, noncombatants, worshippers at monasteries, trees and animals.

Despite Islam’s strict rules of military engagement, several anti-Muslim activists have generalized violent incidents of lone-wolf and mentally ill Muslim extremists as acts of “jihad.” For PJ Media, a conservative news site, hate activist Robert Spencer wrote a listicle titled “10 Acts of Jihad in America That Americans Haven’t Heard About” in August 2014. The listicle only includes incidents where Muslims engaged in violent behavior. Spencer is the founder of the anti-Muslim blog Jihad Watch. The blog is partnered with the David Horowitz Freedom Center, which is labeled a hate group by the SPLC.

The American Center for Law and Justice, a Christian-based conservative nonprofit, did something similar by tagging all content emphasizing Islamic terrorism as “jihad” without providing a clear definition of the actual term.

In November 2015, former Congresswoman Michele Bachmann (R-Minn.) retweeted an American Thinker op-ed that argued against letting Muslim refugees into the U.S. Bachmann, without any statistical evidence, tweeted that 70% of “gang-age” Muslim men intend to come to the country to commit “rape jihad” against non-Muslim women.

How “jihad” can be restored to its original use

Saylor said it might take several decades for non-Muslims in the U.S. to view “jihad” in the way Muslims do.

Saylor said Muslims should normalize the term “jihad” to its original and truest definition: a struggle with oneself to become a better Muslim. He also said some of the responsibility falls on those who don’t practice Islam to research these terms for themselves.

“We should keep using the term ‘jihad’ and not shy away from it until it reaches the status to where non-Muslims understand what we mean when we say it,” he said.