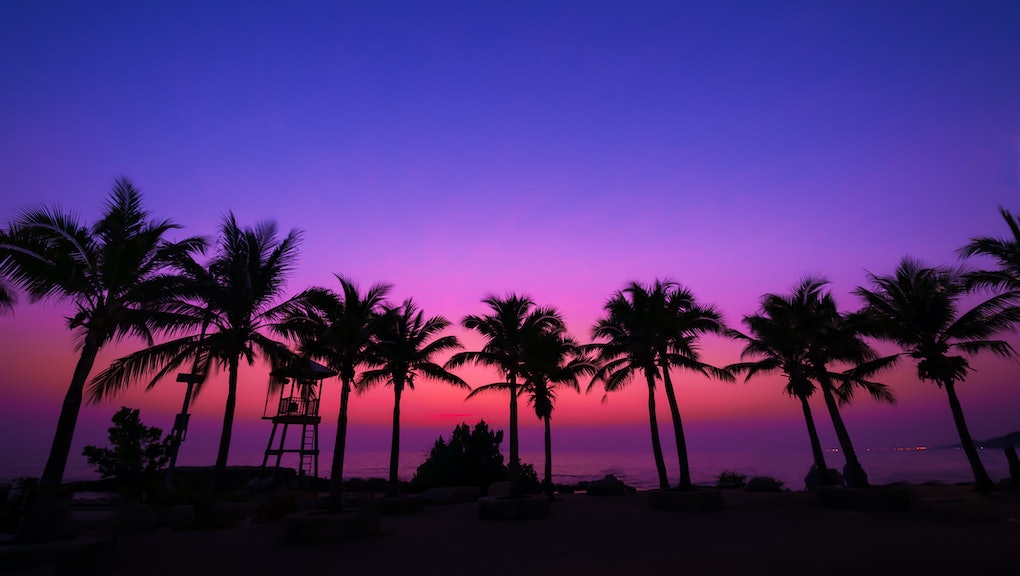 9 expert tips for taking the most beautiful sunset photos

If you’re typically stuck in the office during the dramatic last light of the day or holed up inside at a dimly lit happy hour, the sunset is a glorious thing to take in when you’re on vacation. It’s also one of the hardest spectacles to photograph.

Pro-Instagrammers agree: the colors, quick progress of the sun dipping below the horizon, and lack of an easily accessible, unobstructed view make capturing the sunset easier said than done. From planning your shot to fine tuning the sunset colors, here are some strategies experts use to capture the fleeting moment.

Have a plan for your composition before dusk

To take an epic sunset photo, don’t wait until the sun is already going down to think about what you want to showcase with your photo.

“I think the biggest mistake [people make] is not knowing what you want to show in the photo,” said Dan Young, who runs @viewmysunset, in an email. “If you like the rays or the subtle colors or a cloud formation then make sure your photos [target that].”

The sun doesn’t need to be the center of attention

Adding other elements can give your sunset (or sunrise) photos more depth and intrigue. The photo below features canoes in the foreground and doesn’t even show the sun on the horizon. Around two-thirds of the photo is the ground, while just a third of it shows off the striking, slightly muted colors of the morning sky.

“Inexperienced photographers tend to capture the sun and sky only during the sunset without anything else,” said Christina Tan, the photographer behind the @sassychris1, in an email. “Try to find an interesting object – whether it’s a person, dog, rocks, or a part of a building. If you add a foreground element, it will create a more powerful image,” she said, explaining that the rule of thirds can be helpful for setting up a shot.

For the uninitiated, the Digital Photography School defines the the rule of thirds as “breaking an image down into thirds (both horizontally and vertically) so that you have nine parts.” Use these guidelines to set up a shot with more than one subject.

Don’t shy away from clouds and humidity

Some weather situations are obvious: You’re not going to want to hang out outside while it’s pouring. But humidity or clouds that come before or after a storm can help you set up an eye-catching shot.

“Where I live, you need heat and humidity to keep clouds over the Gulf of Mexico and to witness deep colors,” said Young.

Look for the reflection on buildings or puddles

There’s a reason you see so many beach sunset photos – it’s much easier to get a clear shot when you’ve only got the occasional wave to contend with. On the flip side, if you find a particularly interesting composition in a more urban setting, such as New York City, the search for a foreground will be well worth it.

“During pre- and early sunset, the golden light will cast a perfect cinematic hue on buildings, and often with a more dramatic effect if there are lots of reflective windows,” said photographer David Kukin in an email. “Also look for people to add a layer of interest. They can be posed or candidly walking, but during peak or late sunset, their shapes will cause a dramatic (and striking) silhouette against the sky.”

If you want to get really fancy, look to capture the colors of the sunset in a large puddle on the street — there are many elements to play with. “Some of the best sunsets I’ve seen are in New York after one of those crazy summer storms when the whole sky lights up,” said photographer Lucy Laucht in an email.

Manhattanhenge — the few days out of the year during May, June or July, depending on the Summer Solstice when the sunset aligns with New York City’s street grids — is the perfect opportunity to try out your inner-city sunset photography skills.

Create your own lens flare with backlighting

Sure, there are plenty of apps (LensFlare, Lens Distortions and Reflect Studio, to name a few) that will place a lens flare — that beam of blown-out light coming from one concentrated spot on your photo — wherever you want it after the photo has already been taken. But you can also work with the items and subjects in your frame to create your own personal lens flare style.

“I like to use backlighting, when the sun is directly in front of you lighting the back of your subject (but slightly obscured by something like the branches of a tree or part of your subject) to create a lens flare effect,” said Laucht.

Avoid the temptation to oversaturate colors

A telltale sign of an oversaturated photo? It will look overly bright and brassy. This is a common mistake people make when taking and editing sunset photos.

If you oversaturate a photo, you’ve actually brightened a color or set of colors so much that they go off the camera’s histogram scale (a built-in graph you can see on digital cameras for how balanced, exposed and saturated a photo is). Trusted photography gear supplier B&H Photo has a great guide for reading and understanding your camera’s histogram.

“Similar to any over-filtered shot, I think you just know at first glance — the giveaway sign is if all of the colors within the photo are too extreme, creating that fake effect,” said Kukin. Instead, he suggests “adjusting the vibrance, which will select and slightly enhance only the colors that need that little intensification, rather than pulling that saturation slider all the way to the right.

Joseph Watrous, who goes by the handle @gemini_digitized, said that color adjustment can come down to taste and experience. “Understanding the nature or color and reality keeps my edits on the more natural side of reality,” he said in an email interview.

Experiment with overexposure for intriguing contrasts

“We’re taught to underexpose for sunsets but I personally love when a dreamy light fills the frame,” said Laucht. “I’ll usually overexpose for sunsets. Also, rather than shooting directly into the setting sun, turn around. That moment where the golden light is bouncing off everything is my absolute favorite time to shoot people and portraits.”

In other words: don’t be afraid to do your own thing. Knowing when to bend the best practices a bit can result in some unexpected scenes.

For enthusiasts looking forward to a long future of snapping sunset shots, a Neutral Density filter can be a solid investment. These pricy filters are usually round or square in shape and they’re made of optical resin, which helps diffuse light differently. It sounds more complicated than it is: the filter slows down the light before it hits the camera sensor, so the photographer can shoot with a larger aperture (the hole that lets light into the camera sensor) and take longer exposures. The resulting image will be well-exposed without sacrificing detail, while also allowing for some movement in the photograph (think blurred passing clouds versus ultra-detailed single clouds).

“A graduate Neutral Density filter (ND grad) is essential for my sunset images,” said Tan. “The ND filter holds back light so that the part of the scene that is brightest (usually the sky) doesn’t overexpose. Sometimes I also use an ND filter during the day to slow the shutter speed to make water or clouds smooth and silky.”

Everyone has their preferred gear, whether it be an iPhone, a GoPro or a drone, and there’s no right way to take a sunset photo. If you’re looking for some inspiration for future purchases, here’s what the pros use.

Laucht: “I shoot a Canon 5D Mark IV and usually either a 50mm or 24-70mm [lens] — depending on whether I’m shooting people or landscapes.”

Young: “I have a Nikon D5300 with two lenses. I use an iPhone 7+ for video and to stream live showings on my feature page @sunset_stream. I use a GoPro 4 to shoot timelapses. I use all of them at the same time if the sunset is interesting enough. I have tripods for all my toys, but I don’t use one when shooting with my DSLR. I like to move around.”

Watrous: “Generally I use my Nikon D810 with a 14-24mm lens for most scenes. Filters can come in handy to balance the sky and foreground but are not crucial to make a quality image. What is crucial is making sure you check your histogram display in your camera to ensure proper exposure that balances a raging sky and foreground elements.”

Tan: “The main gear I use is my camera and a wide angle lens for a dramatic landscape scenes. My favorite is 16-35mm lens; in fact I consider myself a 16mm shooter – I know how to compose it like the back of my hand. Also, [I use a] good tripod and shutter release for long exposure, and filters.”