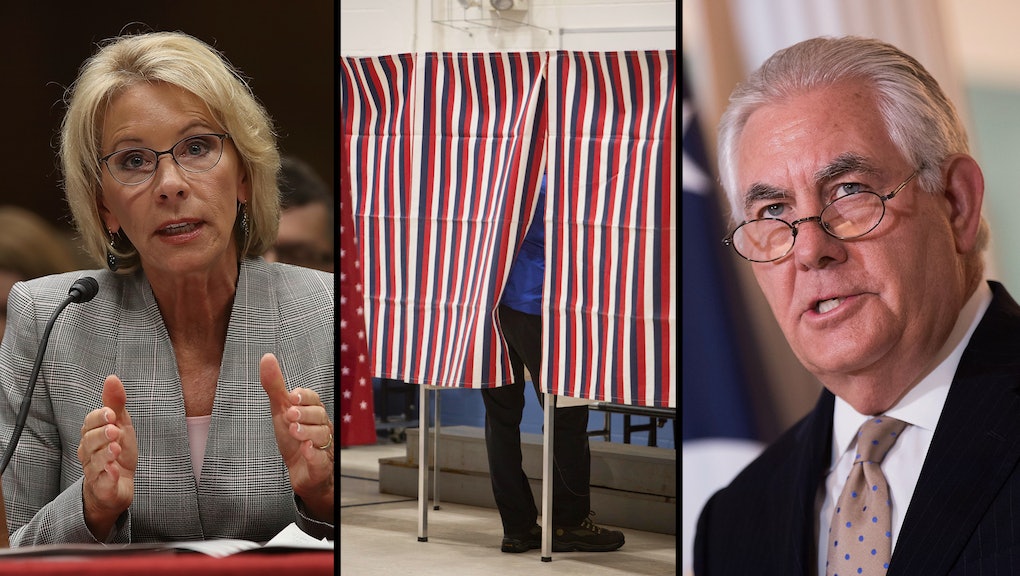 While You Weren’t Looking: 5 stories from the week that don’t feature the letters “ICBM”

Most of the media spent the first half of this week offering you tips for your backyard cookouts and the second half of the week fretting about North Korea. But while everyone was taking some time off, tons of news continued to trickle out from different parts of the Trump administration.

Here are the stories from this week you might have missed.

The Trump administration might be eyeing a major voter-roll purge

Experts are raising alarms about a letter recently sent by the Department of Justice that could be laying the groundwork for purging voters from voter rolls across the nation.

The DOJ sent requests to 44 states asking for detailed information on those states’ compliance with the National Voter Registration Act of 1993. Some former Justice officials have noted that such a sweeping request is odd and could be an attempt to lay the groundwork for noncompliance lawsuits over the law’s provisions on removing inactive voters from the rolls.

If stricter compliance is required, it could result in many voters being purged from the rolls without knowing it.

Eighteen states, along with Washington, D.C., and several consumer advocacy groups, are suing the Department of Education and education secretary Betsy DeVos over their decision to delay rules designed to protect college students who get federal student loans from predatory for-profit college practices.

The department announced last month that it would be delaying the implementation of a rule drafted during the Obama administration that would make it easier for the victims of fraud to receive student loan forgiveness.

The lawsuits argue that the department has a legal obligation to enforce the rule under the Administrative Procedure Act.

Secretary of state and former ExxonMobil CEO Rex Tillerson is a central figure in an investigation about whether or not the oil company misled its investors about climate change and its impact.

The investigation is being led by New York Attorney General Eric Schneiderman, who may ultimately end up forcing the nation’s top diplomat to testify under oath.

Earlier this year it was discovered that Tillerson repeatedly used the alias Wayne Tracker when corresponding with other Exxon employees about the company’s findings on the impact of climate change.

On Thursday the director of the U.S. government’s top ethics watchdog resigned. Walter Shaub, director of the U.S. Office of Government Ethics told the Washington Post that he was stepping down because “there isn’t more [he] could accomplish” under the U.S.’s current ethics framework.

Shaub’s OGE clashed several times with the Trump administration throughout the past year over the president’s potential conflicts of interest and back and the ethics agreements of his many cabinet members.

Shaub will now take a position with the nonpartisan campaign watchdog the Campaign Legal Center, where he will serve as the Center’s top ethics officer.

A new report from the Department of Homeland Security and the FBI says that hackers have been targeting several U.S. nuclear power plants since May.

According to the New York Times, which obtained a copy of the report, officials are unsure whether or not the hackers were able to penetrate the facilities’ operating systems.

A spokesman for the Nuclear Energy Institute reportedly told Bloomberg that there have been no problems at any of the plants since the attack.