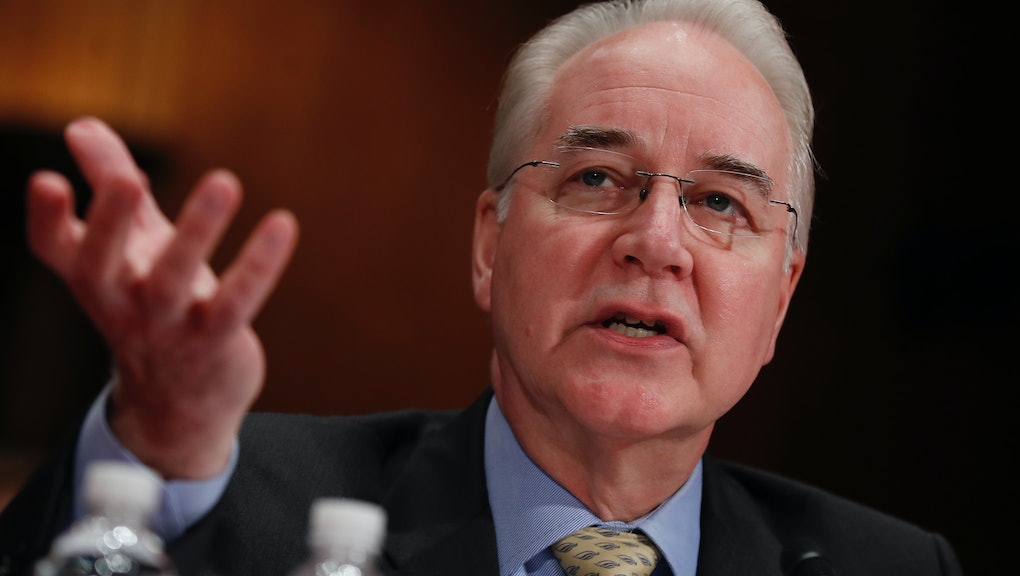 The Campaign Legal Center and Democracy 21 filed a complaint against Secretary of Health and Human Services Tom Price on Friday with the Federal Election Commission, citing an alleged misuse of Price’s congressional campaign funds.

Price, the complaint alleges, used $40,000 in funds from his campaign committee Price for Congress to pay opposition research and communications organization America Rising for help with his confirmation as health secretary — which the groups argue would violate the Federal Election Campaign Act’s stipulation that such funds cannot be converted for personal use.

“Federal law limited [Price] to using his campaign funds to run for Congress or in connection with his duties as a member of Congress,” Brendan Fischer, director of CLC’s federal and FEC reform program, said in an interview. “But instead, it looks like he used at least $40,000 of the funds that were given to him to run for Congress … in order to secure a job after Congress.

“In the same way that it’s prohibited for a member of Congress to get a job as a lobbyist, or hire a career counselor, it is prohibited to use campaign funds to pay an outside group to secure your confirmation to a cabinet position,” Fischer added.

Around the time of the alleged payment, the complaint notes, America Rising began promoting the former Georgia congressman through research and videos that supported his confirmation. According to a Slate article cited in the complaint, Price was reportedly one of four cabinet members who employed America Rising’s help for their confirmation, including Jeff Sessions, Betsy DeVos and Scott Pruitt — but was the only one who used funding from his federal campaign committee in order to do so.

The personal use restriction in the FECA that Price allegedly violated, as quoted in the complaint, declares that campaign contributions should not be used “to fulfill any commitment, obligation, or expense of a person that would exist irrespective of the candidate’s election campaign or individual’s duties as a holder of federal office.”

A federal officeholder, the complaint cites, specifically refers to elected officials, meaning it would not apply to an appointed cabinet position such as Price’s.

Price’s office did not immediately respond to a request for comment.

If found to be in violation of the FECA, Price would be one of several recent congressmen who have been convicted for personal use violations, including Rep. Aaron Schock, Rep. Jesse Jackson Jr and Sen. Larry E. Craig.

In the complaint, the CLC and Democracy 21 urge the FEC to investigate Price’s use of campaign funds and “seek appropriate sanctions” against any violations Price may have committed — which Fischer hopes will “deter other candidates from misusing campaign funds in this way.”

“If a candidate can use [campaign] money to advance their own personal interests, then the contributions that they’ve received run a much greater risk of corruption, and that’s the reason that the personal use restriction is on the books,” Fischer said.

“That’s why it’s important that the FEC takes action in this instance and actually enforces the law against [former] Congressman Price, to ensure that the integrity of the personal use restriction [is] upheld.”