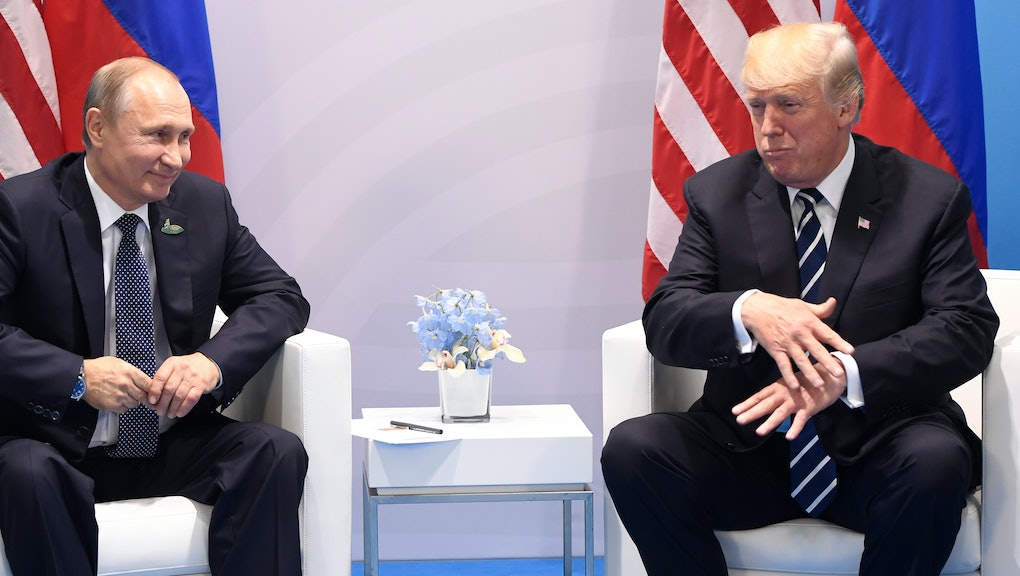 President Donald Trump took to Twitter Sunday morning to tout the “success” of the G20 Summit in Hamburg, Germany, and offer details about his recent meeting with Russian President Vladimir Putin.

Trump, who declined to give a press conference following the summit as his predecessors have traditionally done, called the summit a “great success” on Twitter, even celebrating the occasion with a photo slideshow set to a choral rendition of the slogan “Make America Great Again.”

In his discussion of his meeting with Putin, Trump confirmed that the Russian leader had “vehemently denied” claims that Russia meddled in the 2016 election despite mounting evidence to the contrary.

Though Trump added in his tweet that he had “already given” his opinion about who committed the election hacking, that opinion is seemingly unclear. The president said during a news conference in Poland Thursday that he “[thinks] it was Russia” who meddled in the election, “but I think it was probably other people and/or countries, and I see nothing wrong with that statement. Nobody really knows for sure.”

Putin, meanwhile, claimed following his meeting with Trump that the president seemingly agreed with the Russian president’s denial of his involvement.

As a result of the election hacking, Trump confirmed in his tweets that he and Putin had discussed forming an “impenetrable cybersecurity unit,” so that, the president claimed, “election hacking and many other negative things, will be guarded.”

Rather than criticize Putin and Russia, Trump’s Sunday morning tweets were instead largely directed against former President Barack Obama and the Democratic National Committee — who Trump took to task for rejecting requests for their server from intelligence agencies — as well as “fake news.”

Trump remained largely deferential toward Russia in his Sunday tweets, saying the two countries had not discussed any sanctions against Russia — such as those recently approved by the U.S. Senate, which the president is attempting to water down — and promised a constructive relationship between the two nations.

“Now it is time to move forward in working constructively with Russia!” Trump exclaimed on Twitter.