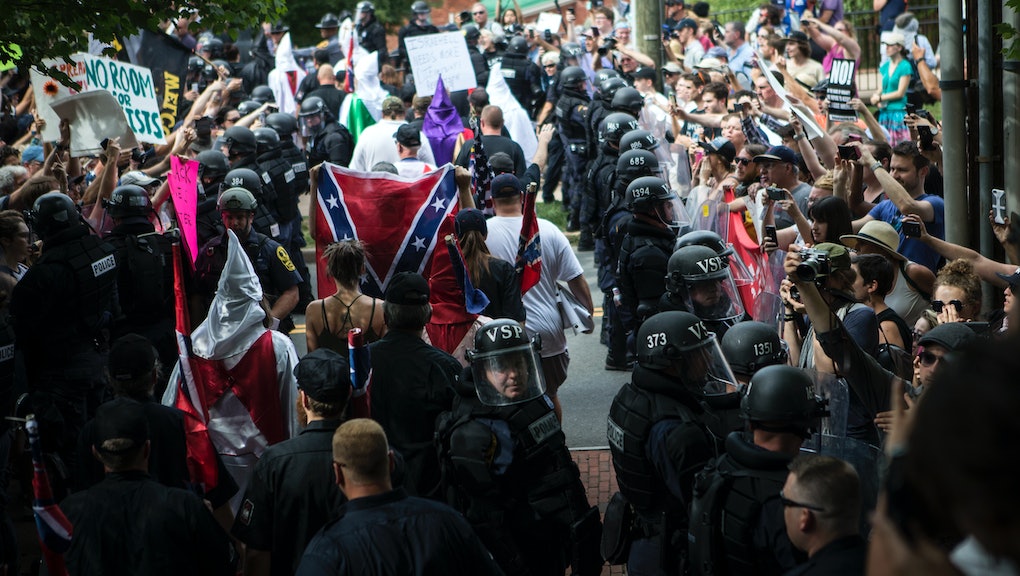 A Ku Klux Klan chapter convening at a rally in Charlottesville, Virginia, on Saturday afternoon not only overestimated member turnout, it seems to have underestimated potential for a counter-protest.

According to CNN, approximately 50 Loyal White Knights — some robed — showed up to challenge the removal of a monument to Confederate Gen. Robert E. Lee from Emancipation Park, formerly Lee Park. They were met with hundreds of demonstrators determined to drown them out.

“I teach about slavery and African-American history, and it’s important to face the Klan and to face the demons of our collective history and our original sin of slavery,” Jalane Schmidt, a professor at the University of Virginia and a leading voice behind the statue’s removal, told the Washington Post. “We do it on behalf of our ancestors who were terrorized by them.”

According to the Post, counter-protesters may have numbered as many as 1,000. Law enforcement ushered Klan members through the counter-protest to their pre-arranged rally spot in Justice Park, another Charlottesville green space that previously paid tribute to a confederate Gen. Stonewall Jackson.

The Loyal White Knights reportedly shouted about “white power” for around 40 minutes before police ferried them back to their cars, which is when tensions began to boil over. According to CNN, officers deployed tear gas against the crowd after declaring counter-protesters — who apparently attempted to keep Klan members from leaving — an “unlawful assembly.” CNN reported that police made 23 arrests, but could not say whether or not those were Klan members, counter-protesters or both.

Ahead of the rally, Loyal White Knight chapter members forecasted a much larger turnout: The Post reported that the North Carolina-based group expected 80 to 100 participants to show up, most of them armed. Virginia is an open-carry state.

“The liberals are taking away our heritage,” Klan member James Moore told the Post, explaining the chapter’s decision to protest. “By taking these monuments away, that’s what they’re working on. They’re trying to erase the white culture right out of the history books.”

Charlottesville’s city council voted to remove and sell the Lee statue in April, the conclusion of a yearlong debate over its fate. According to the Post, a court-issued injunction has stayed the monument’s removal pending a November hearing.

Going into the KKK rally, police and city officials urged people “not to take this totally discredited fringe organization’s putrid bait at all” and stay home, as Mayor Michael Signer put it to the Post, but obviously, many disregarded that plea.

“It is important for me to be here because the Klan was ignored in the 1920s, and they metastasized,” Schmidt explained. “They need to know that their ideology is not acceptable.”