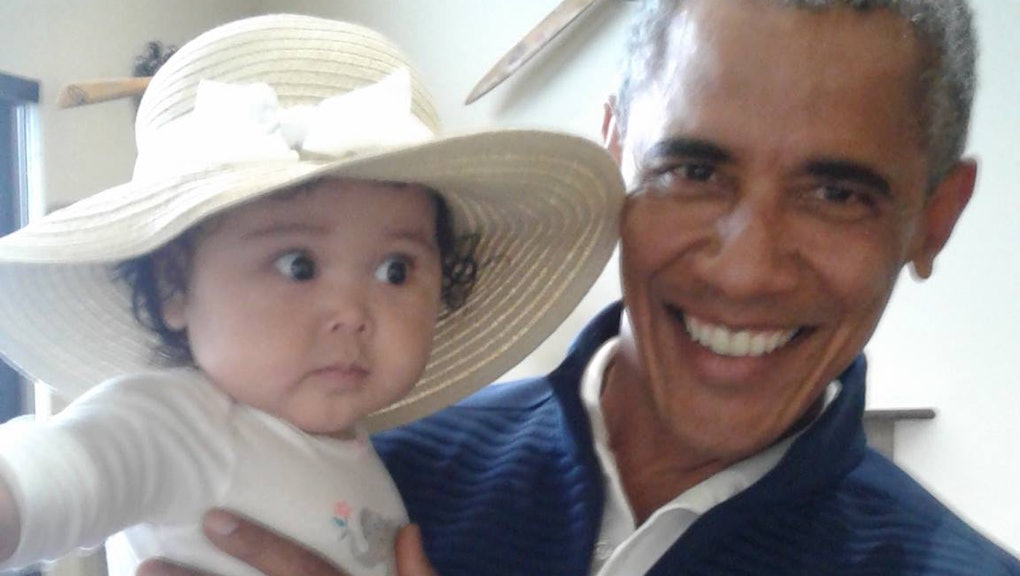 Here’s a photo of Obama holding an adorable baby

In a news cycle that is reliably terrible, here is one nice thing: a photo of former President Barack Obama holding a wide-eyed, chubby-cheeked baby in a festive sun hat. Please enjoy!

The baby perched on Obama’s hip is named Giselle. She’s the daughter of Jolene Jackinsky, who ran into our 44th president at Anchorage International Airport on Monday. Or, as Jackinsky told CNN, Obama ran into her, making a beeline for Giselle and “scooping her up,” seemingly without waiting for permission.

“Who is this pretty girl?” Obama reportedly cooed, before joking to Giselle’s father, “Hey! I’m taking your baby.”

“It was unreal and very exciting,” Jackinsky told CNN. “After I met him I couldn’t believe I actually talked to him and he held my baby.”

But Obama loves babies, and his uncanny ability to mollify them has earned him the nickname “baby whisperer.” His White House photographer, Pete Souza, credits the monicker to this moment from 2011:

Here’s Obama playing with a small child dressed as Spider-Man:

Here he is brandishing an overjoyed infant in celebration of the Fourth of July:

It could very well be his favorite way to celebrate our nation’s birthday (please note that Obama’s encounter with Giselle took place July 3):

Here’s Obama hanging out with his baby niece in 2009 and obviously enjoying every goddamn second of it:

Here’s Obama lovingly smushing his face against that of his baby girl, Sasha, in 2006:

Here he is helping some toddlers find easter eggs at the 2009 White House Easter Egg Roll:

And, finally, here is a live look at Obama losing his shit over a baby dressed like the pope at the White House’s 2015 Halloween celebration: