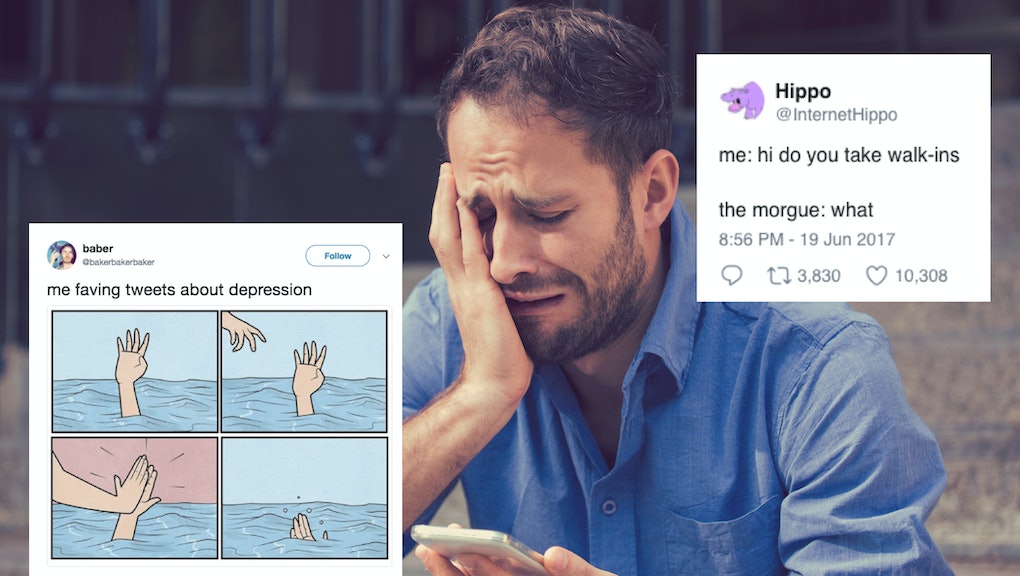 Why does everyone on the internet want to die? How suicide memes took over the web

It’s been a tough few years. 2016 was arguably one of the worst years on record, and 2017 isn’t off to a great start. Recently, it’s never felt more like the collective internet wants to die.

While glamorized suicide has reemerged in pop culture with 13 Reasons Why and a teen texting scandal that ended in suicide has taken over headlines, the internet has become awash in death jokes and memes mocking our fragile mortality.

To be clear: The majority of people who we spoke to who make these jokes and memes are far from suicidal. But death and suicide memes have become shorthand for expressing everything from exasperation to outrage and a general malaise about the state of the world.

So how did this all start? What are these memes trying to express? Why do death jokes resonate so deeply on the internet? And, well… are we all OK?

“Ever since I’ve been online, it’s always been a thing — like, ‘I want to die,’ etc., and especially on Twitter,” Twitter personality and musician Leon Chang (aka @Leyawn) said in a message. “It’s just extremely relatable. It’s an extreme emotion that we can all relate to at least to some extent.”

This trope — coupled with unsettling world events like the 2016 U.S. election; terror attacks in Orlando, Florida, and Nice, France; Brexit; the untimely deaths of Carrie Fisher, Prince and David Bowie; and the Patriots’ fifth Super Bowl win — have seemingly poured fuel on the death-meme fire.

It doesn’t help that many Americans, online and off, already perceive their lives as getting worse. As New York magazine’s Jesse Singal pointed out in a piece published last spring, “For over 80 years, young Americans have been getting more anxious and depressed, and no one is quite sure why.”

Part of it may have to do with the fact that we’re generally more aware of negative news stories and anecdotes than positive ones, which can make the world seem rather bleak, Singal noted.

Heavy social media use has also been linked to depression, and Americans are spending more time online than ever.

When faced with these converging forces, who can blame people for meme-ing about the sweet release of death?

How the trend started

According to the website Know Your Meme, the first “kill me” memes began cropping up between 2011 and 2012. Inspired by a famous scene in the movie Alien in which the lead character begs for death, these earlier memes were largely focused on putting others (or objects) out of their misery.

One of the first documented instances of this meme features a dog with a forlorn face propped up for the camera wearing a human argyle sweater and jeans. The caption reads, simply, “Kill me.” When the photo was posted to Reddit in 2011, it received over 21,000 upvotes and 830 comments before being archived, according to Know Your Meme.

A year later, in 2012, Piers Morgan tweeted, apparently about soccer, what’s now a canonical tweet: “I want to die.” The tweet was so succinct and resonated so widely it quickly became a meme in itself and now has over 152,000 retweets.

Between 2013 and 2015, “kill me” memes remained steadily popular, but it wasn’t until 2016 that they began to appear in the public consciousness.

A private Slack group called Private Meme Club, which is popular among a group of top memers, launched a channel called “I want to die” in November 2016, and around that time Instagram meme accounts like @GothShakira, @scariest_bug_ever and @weareallmemes began gaining niche popularity by documenting the small indignities of everyday life. Morbid Facebook pages like Nihilist Memes also began to get mainstream attention in 2016.

“In the past year especially, I’ve seen death memes increasing more,” Ronin Woods, the 23-year-old founder of a Facebook page called DEATHMEMEZ, told Mic. “Before they were more posted on places like 4chan and Reddit and places where stuff starts, but now I’ve seen them move onto broader social media and Facebook.”

“I don’t want to say it’s just because of Trump, but I do think the world with the internet has become more connected,” she said. “We’re learning more about the world than we want to know about … and I think that’s really affected people mentally. Since people don’t know how to deal with it, people try to laugh it off and joke that they just want out.”

“Since people don’t know how to deal with it, people try to laugh it off and joke that they just want out.” — Ronin Woods

What they’re trying to say

Though some people who create death memes and jokes do have depression, for most people they’re just a shorthand way to express exasperation.

They’re the natural progression of the meme and subsequent website FML. What they’re communicating is, essentially, “Fuck my life so badly I just want to end it.”

Jessica Rudis, a Los Angeles-based social strategist, agreed. She said death memes appealed to her because they were an effective commentary on the state of the world right now.

It’s no longer a taboo

“I remember that even a year ago saying something about wanting to die and killing yourself was big, almost taboo, and wasn’t something that was ever joked about,” said Christina (aka @couturetits), a 19-year-old in New Hampshire who recently tweeted a viral death joke.

“I think millennials and young people have kind of taken suicide and, just like they do with everything else, have turned it into a joke,” she said. “I suppose that it speaks to the mental state of America, but more so the youth’s mental state particularly, considering they’re the ones using the ‘kill me’ memes. ... I feel like young people have started joking about things like death and wanting to die to lighten the mood, as ironic as it sounds,” she said.

“It might be a new type of dark humor,” said Aaron Golden, a 17-year-old in Los Angeles who has also tweeted a viral death joke under the name @flexxistential. “Maybe less dark humor about sex and more about existential issues or taboo issues that haven’t been totally 100% destigmatized and we’re bringing it mainstream. There are a lot of nihilists on Twitter.”

This is something Julia Rosenfeld, a 20-year-old student at Brown, knows all too well.

Last fall she created the Instagram meme account @weareallmemes when it was still considered somewhat edgy to meme about mental illness on the platform. Over the past nine months, she’s watched it balloon to over 30,000 followers.

“There are a lot of nihilists on Twitter.” — Aaron Golden

Though she doesn’t post death memes explicitly, she said she’s found community by joking about the frequent misery of daily life.

“I think what you see on the internet is normalized for young people,” she said. “So if you see something being joked about it’s less scary for people. If you looked at memes two years ago on Instagram, they really would have never said anything about death or even depression.”

Other memers said that while jokes are one thing, actual mental health issues are another.

“At this point it’s pretty clear that you can joke about killing yourself on Twitter if you’re not actually going to do that or have mental issue,” Golden said.

There’s a difference between normalizing and glamorizing

But while joking about death has become commonplace, there’s obviously a big difference between joking about suicide and actively pursuing it. According to one therapist we spoke to, memes can be a powerful method of self expression and can help people mentally cope with serious issues, but they can also serve as smoke signals for deeper issues.

“With most people, death is about a rest, reset or not dealing with things anymore, and that idea is welcome to a lot of people,” said Bea Arthur, a New York City-based therapist. “Memes can mitigate the intensity of a situation, but do I think there’s a bad side? Yeah.”

“If you surround yourself only with other people who are sad and cynical, even online, that can eventually extend to you,” Arthur said. “Memes are a temporary relief, but human contact with people you love is more important. ... Don’t just stay on your phone and chuckle at memes, go to brunch with friends. It will relieve more physiological affects of anxiety or depression and you’ll feel less negative about the state of the world.”

Woods says that when posting to her DEATHMEMEZ Facebook page, she takes care to make sure her jokes don’t cross the line toward glamorizing suicide. In fact, the page has pretty much pivoted away from the types of memes the name suggests, and most content posted there is broad-based and unrelated to mortality.

Woods even goes as far as to hide jokes about killing herself from certain friends when she posts them to her personal Facebook. She said that she has one friend in particular with acute mental illness, and she doesn’t want to trigger her by accident with an ill-timed meme.

All memes go to heaven

Part of the reason death tweet memes might have lasted so long, is that it’s very difficult for a brand to hop on the trend. A brand tweet is the nail in the coffin for a popular meme, and so far, suicide has remained a bit too edgy for any major corporation to embrace.

“I think it’s one of those memes that brands don’t really touch because it’s really perceived as negative,” said Rudis, “and that’s why it’s had a longer shelf life.”

That said, parody account @Nihilist_Arbys has better engagement than the real Arby’s brand handle and boasts almost 300,000 followers on Twitter.

But whether or not death memes are a positive force, they’ll inevitably face their own demise.

In February, Meme Economy, a popular subreddit dedicated to predicting meme trends and evaluating a meme’s viability, declared “accepting death” memes were on the rise. Yet hardly five months later, similar memes have been labeled as unforgivably “normie,” or too mainstream.

Meme-ing about killing yourself may feel relevant now, given recent political and world events, but at some point things will (hopefully) start looking up.

Caleb Wilde, a Pennsylvania-based funeral director and author, has built his career on talking about death candidly online. He says he’s created many death memes in the past, but now he’s beginning to think the trend is becoming stale.

“I try to avoid death memes because they’re overdone,” he said. “If I share a death meme, probably half the people I’m sharing it with have already seen it. Not that I don’t laugh at them, but now I try to go for things that are a little bit more original.”

But not every memer thinks death memes will soon be dead themselves.

According to Leon Chang, “depression/suicide memes have been around since the beginning of the internet” and he doesn’t see them fading away.

And as one Meme Economy user writes, “Depression will always be a part of meme-ology. It’s too intertwined to remove.”

Editor’s note: For information about suicide prevention or to speak with someone confidentially, contact the National Suicide Prevention Lifeline at 1 (800) 273-8255 or the Crisis Text Line at 741-741. Both provide free, anonymous support 24 hours a day, seven days a week.