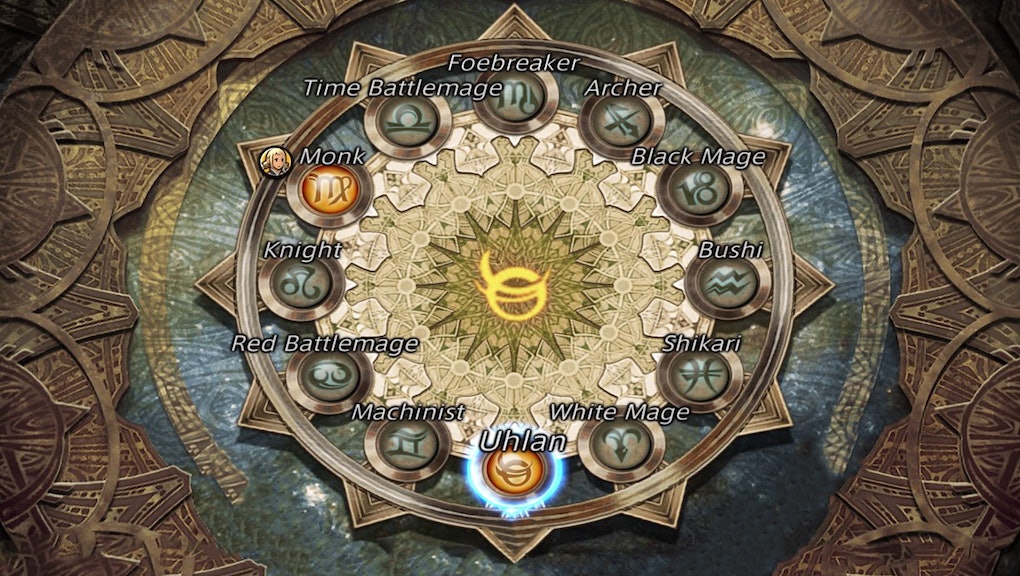 ‘Final Fantasy 12: The Zodiac Age’ Job Guide: What class should I choose?

One of the primary draws of Final Fantasy XII: The Zodiac Age is the inclusion of the International Zodiac Job System. This new job system completely changes how character building in FF12 works, so if you’ve played the original game you can throw whatever you know out the window. Final Fantasy 12 now classes jobs similar to the Final Fantasy Tactics sub-series; you’ll have to choose one for each of your characters (and a second one later), which will lock them into a set progression for the rest of the game.

Final Fantasy 12: The Zodiac Age job guide: How many classes are there, and what are they?

There are 12 job classes available to choose from in FF12: The Zodiac Age. None of the six characters are barred from any of the jobs, but some of them are better suited for specific classes. The jobs are:

The Bushi is The Zodiac Age’s version of a samurai. The Bushi main weapon is the Katana. They don’t utilize magic, instead using light physical attacks and high-speed to defeat opponents. They fall under the Aquarius zodiac sign.

In previous Final Fantasy games, the Uhlan would have been known as the Dragoon. Uhlan cause high damage using spears, but are slow. Their lack of speed is offset by their ability to use heavy armor. Taurus is the zodiac sign of the Uhlan.

These rogue-ish hunters use daggers and ninja swords along with light armor. With the right training, Shikari can be the fastest job type. Shikari falls under the Pisces zodiac sign.

This is your healer. Every party needs one, and if you’re smart this will be one of your starting classes. They can restore your party’s HP and devastate undead enemies, though you won’t run into a ton of those. White Mages equip mystic armor and rods. They fall under the zodiac symbol of Aries.

This class is just known as “Red Mage” in most Final Fantasy games in which it appears, but “Battlemage” sounds cooler I guess. Red Battlemages are represented by the zodiac Cancer and can use many types of magic. They’re also the exclusive users of the powerful Arcane Magic. Their primary weapon is the mace.

Monks only need their fists to demolish the enemy. They have good health and evasion growth stats and, in addition to their fists, can fight with poles. Monks fall under the Virgo zodiac sign.

Foebreakers are tanks and weaken enemies while soaking up damage. They use axes, hammers and hand-bombs to take on their foes, and shields and heavy armor to defend against them. The Foebreaker falls under the zodiac Scorpio.

Archers are nimble and fight foes from afar. They use bows to take down enemies and are particularly useful against flying enemies. The drawback to their quickness is they can only use light armor. Archers are represented by the zodiac Sagittarius.

This is your standard heavy-duty warrior. Knights can equip heavy armor and shields, as well as swords and greatswords. Depending on how you build them, a Knight can be a brutal melee attacker or a damage-absorbing tank. Knights fall under the Leo zodiac sign.

Time magicks can speed your party up by running circles around your enemy, or they can stop your foes in their tracks. Time Battlemages, represented by the zodiac sign Libra, can use time magicks or their crossbows and heavy armor to devastate enemy formations.

Black Mages are another of Final Fantasy’s staple job classes. They call on ice, fire and Black Magic to decimate foes. However, they’re quite soft, only using staves and mystic armor for physical protection. Black Mages fall under the Capricorn zodiac sign.

Final Fantasy 12: The Zodiac Age job guide: What job class should I choose for each character?

The fact that each character has different growth rates and stat strengths was easy to overlook in the original version of Final Fantasy 12. However, it’ll become more noticeable when you’re playing The Zodiac Age.

Fran, Balthier and Basch’s stats are all geared toward physical classes. Their base magic stats are mediocre, so their first class should be something that primarily focuses on physical damage. Fran, in particular, has the best vitality in the game, so instead of keeping her as an Archer as the game implies she is, you may want to make her a Foebreaker or a Knight.

Penelo is the only clearly magical-inclined character in the game. Her physical stats are horrible, but her magic stats are the highest in Final Fantasy 12. Make her a Black or White Mage.

Ashe and Vaan are balanced characters, with Vaan leaning a bit more toward physical strength. These two will perform well as either physical or magical attackers, and are ideal for a physical/magical dual-class later in the game.