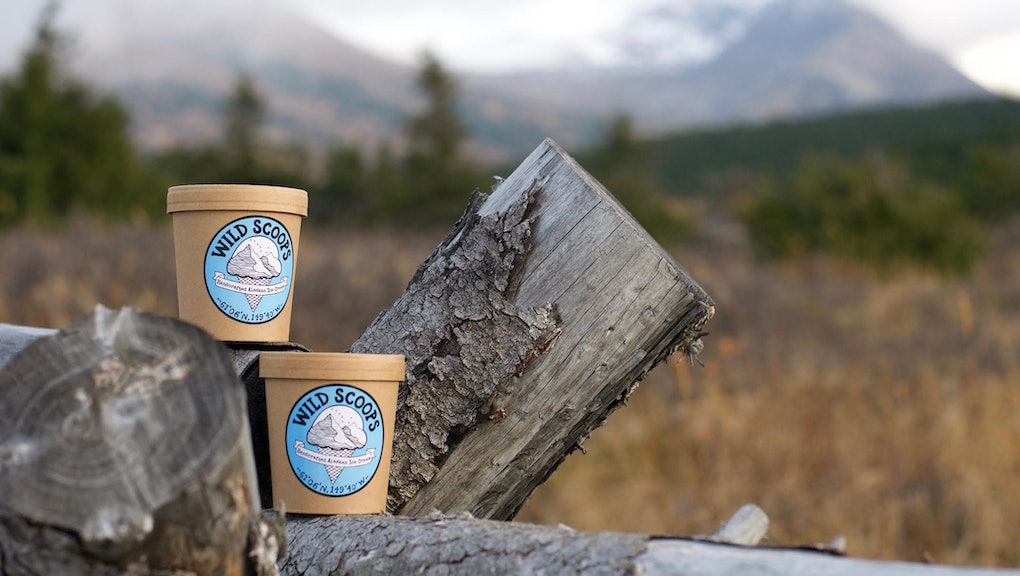 Even in the darkest days, Alaskans claim they’re more obsessed with ice cream than any other state

It’s barely breakfast time in Alaska and our rafting guide won’t stop talking about ice cream. We’re rafting down the rapids of the Nenana River near Denali National Park, my near-frozen red hands are clenched into my drysuit and I’m trying not to think about the glacier-silt infused, 34-degree water that’s somehow seeped into my lap. Yet, Jody, who is paddling us on this icy cold adventure, is listing off his favorite flavors of Ben and Jerry’s, for which he has to drive almost two hours to purchase, in Fairbanks. I’m trying to think of anything else. Noodle soup, hot chocolate, anything steamy.

“Did you know Alaskans eat the most ice cream per capita of any state?” Jody rattles off in his Southern twang. I don’t believe him, yet, through the rest of my two weeks in Alaska, I hear this statistic repeated by locals and seasonal workers over and over again. And it seems that every town I stop in, from Homer to Girdwood, an ice cream shop, if not multiple ice cream stands, is a prominent feature in this state known, above all else, for its cold weather.

And though many Alaskans brag that Alaska consumes more ice cream per capita than any other state, there are no data-based statistics to back this up. The International Dairy Foods Association does not have data to prove this, though a representative for the association did not dispute that this may be true.

“It’s apocryphal,” Marc Wheeler, founder of Juneau’s Coppa said in an interview. “Alaskans eat more ice cream in the winter than anyone else.” In Southeast Alaska, where Coppa is based, more than 100 inches of rain falls a year, and while that may hinder business in the lower 48, Wheeler attests that business can still boom in bad weather, despite the odds.

“I make ice cream in a cold place, we don’t have [much] dairy so sometimes I wonder what we’re doing,” Wheeler laughed, noting that opening an ice cream shop somewhere like California — which has both dairy farms and gratuitous sunny days — would be the obvious route. But still, since Coppa opened in 2013, he’s seen a booming Alaskan interest in handcrafted ice cream.

“Ice cream struck me as a perfect vehicle for showcasing local flavors and being creative,” Elissa Brown, who moved to Anchorage in 2014, said of her push to start Wild Scoops, the handmade ice cream company she started with her fiancé and business partner, Chris Pike, nearly three years ago. “It makes everyone happy, it’s a perfect community builder ... so it really appealed to me,” Brown said.

Before she made Anchorage home, Brown said there was no locally made ice cream in Alaska’s biggest city. Though Wild Scoops first brick-and-mortar shop only opened about a month ago, lines curl out the door and Brown is “churning up a storm to keep up with it all.”

The state that loves ice cream the most

While craft ice cream companies have popped up all over the lower 48 in the past decade, Alaska, which only has one functioning dairy farm, is only just seeing a recent surge of homemade ice cream, despite a deep-seeded love of the frozen dessert.

“Alaskans are passionate by nature, and when they love something they love hard,” Mary Smith, founding editor of Edible Alaska, said. “Alaskans know how to live well, and live for the moment — like taking advantage of a sunny afternoon to get out and play. You never know how long that sun is going to last! Ice cream is like that — you could hold back and wait for the perfect moment, or you could just seize the cone.”

A love for local

“So much doesn’t grow here, but, we are able to use the local flavors of things that do grow here,” Brown said. Living in Alaska you just learn about flavors that are Alaskan, like spruce tip and birch syrup.” Wild Scoops’ ever-changing roster of flavors includes Stika Swirl (made with local sea salt), AK Honeycomb, Yukon Gold (made with Alaskan potato chips), Spruce Tip and many more seasonal flavors. Ingredients like beets, carrots, black currant, mint and sage come directly from local growers.

“By sourcing local ingredients, we want to help build a local economy around ingredients,” Wheeler said, noting he prioritizes sourcing ingredients like wild berries from rural communities, which have a nearly nonexistent cash economy.

A taste of the state

Americans in the lower 48 may not think of Alaska as having a regional cuisine, but there are, indeed, uniquely Alaskan flavors. Unsurprisingly, ice cream works as a vehicle to introduce visitors to unfamiliar ingredients.

Coppa’s ice cream cart, located by the cruise ship docks, introduces passengers to flavors like Birch Butter Pecan and Rhubarb, and Wild Scoops has a four-flavor sampler so first timers can indulge in more familiar flavors while also expanding their horizons. Wild Scoops also opens up its Anchorage test kitchen to the public on Thursday afternoons, to let all those curious about Alaskan ice cream peek into the process.

So why do Alaskans love ice cream so much?

Along with a love for all things local and an immunity to nontraditional ice cream weather, there are still some pervasive theories as to why this state holds onto its possibly fictitious record-breaking ice cream per capita myth.

“Because our summer days are so, so, so, so, long, there are a lot of hours in the day when you’re inspired to eat ice cream,” Brown posited. Given that the sun barely sets in Alaska from May to September, this theory is plausible — an after-dinner ice cream can soon become a late-night ice cream, all enjoyed outside in the sunshine.

A customer at Wild Scoops also theorized that because there’s no “bikini season” in Alaska, ice cream lovers are never tempted to restrain their love for the treat.

Alaskan love for ice cream doesn’t fade in the winter, Brown attests, meaning that Alaskans may be more apt to eat ice cream year round as opposed to those who live in four season states. “In winter, it goes the opposite way: The days are so short [and dark] so we need to keep out spirits up and light candles and eat ice cream [out of a pint at home],” Brown said. This is also an opportunity to indulge in cozy flavors like cinnamon, stout, pumpkin and peppermint.

Brown, however, has one more all encompassing theory about what makes Alaskans the country’s most devoted ice cream lovers, “We just like the good things in life,” she said.