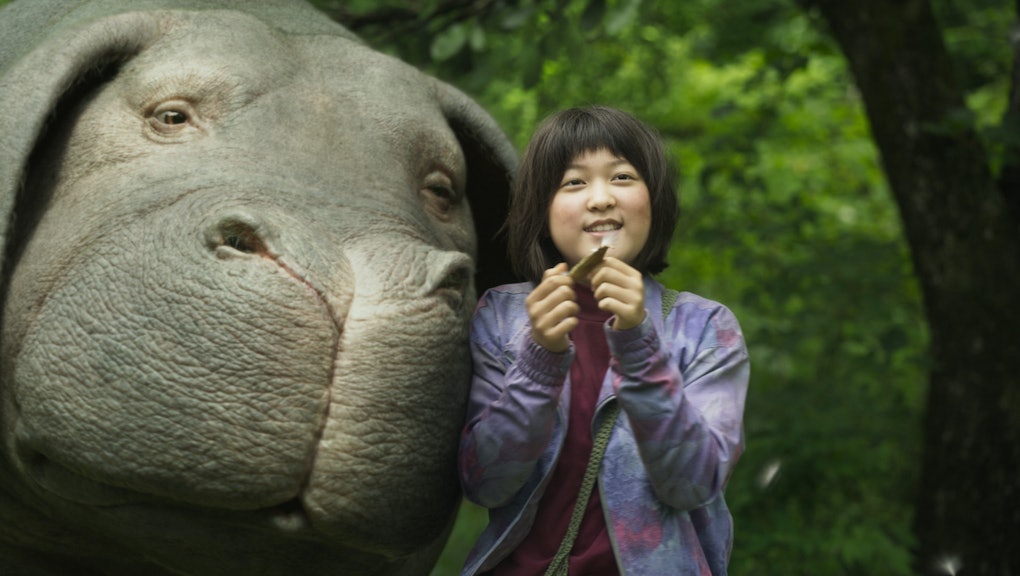 The film’s namesake protagonist is a genetically engineered “superpig” named Okja. Mija, a Korean farm girl caretaker, must rescue Okja from the Mirando Corporation, the multinational company that engineered the pig, all with the help of a plucky crew of masked animal liberation activists. Blending heavy violence with clownish satire, the movie takes shots at factory farming, capitalist exploitation and PR-friendly mindful consumerism.

There’s just one problem. Mixed into the dozens of subversive, well-delivered political messages is an insidious myth: that genetically modified organisms are unsafe to eat. Those who are moved to action by Okja — the movie is generating a horde of new vegans — might want to be careful not to mix informed arguments against animal abuse with anti-GMO sentiment, which is a movement on par with climate denial and the anti-vaccine movement.

“Because genetic mutation is too dangerous, Mirando’s been disguising it as natural, safe and non-GMO,” Jay, the leader of the animal liberation activists says around halfway into the film. “But that’s a complete scam.”

GMOs are safe to eat. This is not a matter of opinion. According to one Pew Research study from 2015, there is more consensus in the scientific community that GMOs are safe for human consumption than the fact that climate change is man-made. While there are a couple of legitimate concerns about the long-term ramifications of GMOs, like developing pesticide-resistant plants, whether they are safe is not one of them.

And GMOs have done plenty of good, transforming agriculture worldwide by creating things like drought-resistant corn and “golden rice” full of vitamin A. As humanity faces climate change and a possible world hunger crisis, GMOs will be an invaluable tool to boosting crop yields, reducing carbon dioxide emissions and saving beneficial insects.

When the anti-GMO messaging isn’t explicit, it drips into the subtleties of the world of Okja. The villain at the center of this story, the Mirando Corporation, is an obvious nod to Monsanto. It’s not Tyson or Perdue — titanic industrial farming corporations that dump more toxic waste into U.S. waterways than companies like ExxonMobil — that are the film’s symbolic villain, but Monsanto, a corporation whose infamy rests almost entirely on its association with GMOs. Not to say Monsanto is totally innocent.

Selective breeding of animals can lead to animals that suffer extreme pain and hereditary disease. But it’s these factors, not the very fact that they’re genetically modified, that’s worthy of concern.

Again, the movie makes a number of scathing critiques of capitalism and global exploitation of both animals and their caretakers. Mirando isn’t just depicted as a sinister multinational corporation, but one going through a rebranding as a responsible, happy-go-lucky, 21st-century organization — a satire of the kind of conscious consumerism advocated by CEOs like Whole Foods’ John Mackey.

“You and the other local farmers are just promotional devices for them — just a picturesque backdrop,” the activist leader Jay tells Mija, laying bare the ways that corporations use optics and marketing to protect consumers from confronting the truth of how their products are manufactured.

At one point, Mirando’s PR lackeys insist that if Mija wants to see Okja again, she has to wear a traditional, feminine Korean dress for the cameras, a nod to racial exoticism and tokenization.

“All food production is exploitative,” says one of the radicals as he starves himself to the brink of consciousness with his extreme veganism.

But for real-life activists, these kinds of anti-science stances can lead to political misfires. Greenpeace, for example, has taken strong action against nuclear power, even if many scientists believe that nuclear energy is one of the surest defenses against climate change.

This means activists have to choose their targets well, and informed voters must be literate in what constitutes a real threat to health and safety. Whether someone believes that the treatment of Okja is cruel, brutal and unjust is entirely different than whether she is safe to eat.

She almost certainly is.