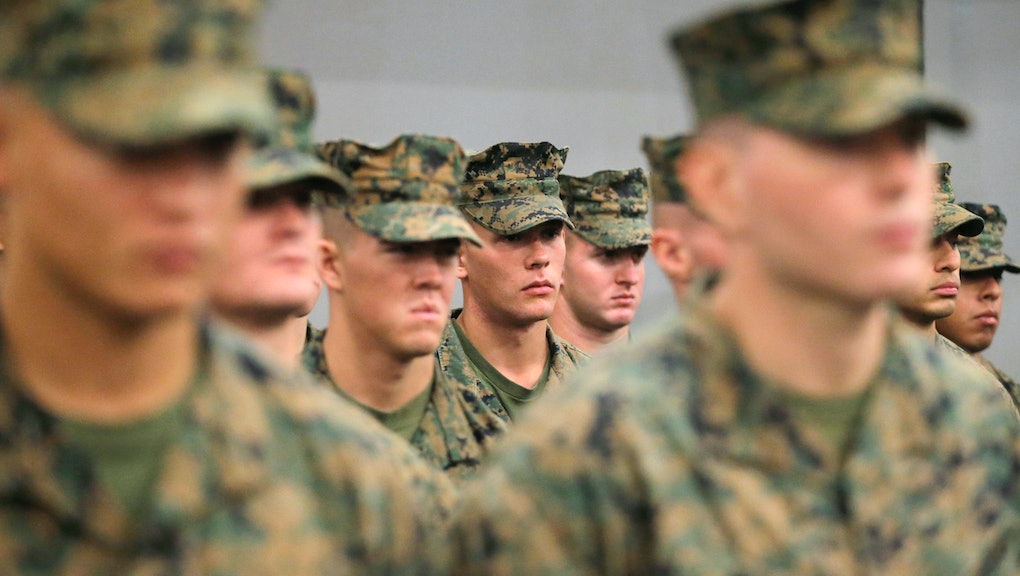 Officials announced Monday that a United States Marine has been sentenced to 10 days in jail for sharing sexually explicit photos of female service members in a closed Marines United Facebook group.

According to Military.com, the unnamed Marine was tried at a June summary court martial, an administrative proceeding where the defendant appears only before a judge rather than an entire military jury. After pleading guilty to charges related to the nude photo-sharing scandal, a judge sentenced the Marine, whose identity is protected via the Privacy Act of 1974, to a demotion of three ranks and a loss of two-thirds of his pay for one month in addition to the 10 days of jail time.

In April, the Navy and Marine Corps made it a crime to post or circulate sexually explicit photos online “with the intent to realize personal gain; with the intent to humiliate, harm, harass, intimidate, threaten or coerce the depicted person; or with reckless disregard as to whether the depicted person would be humiliated, harmed, intimidated, threatened or coerced.”

The Marine may be the only one to appear before a court for his participation in the March scandal, which involved some 30,000 Facebook group members sharing hundreds of nude photos of female service members. Though an investigation identified 67 suspects involved in circulating the nonconsensual online photo-sharing who are Marines — as well as 22 who are civilians — the military has so far only handed down punishments including “two administrative separations, seven non-judicial punishments, and 22 other adverse administrative actions.”

None of them have been tried in court, according to Military.com.

The photo-sharing scandal has reignited discussion over how to make the military a less toxic environment for women, who face high rates of sexual assault in addition to the kind of harassment the nude photo scandal shed light on.

For many higher ups in the Marine Corps, the incident proved to be a wakeup call, prompting them to launch a task force dedicated to combating online harassment and the “cultural issues” underpinning the Marines’ nonconsensual photo-sharing.

“How we handle cases today is much different and more effective as a result of what occurred with Marines United,” Gen. Glenn Walters, the current head of the task force, told Military.com.

“Moving forward, we are planning to establish a permanent structure that can address all of the factors that contribute to the negative subculture that has allowed this behavior to exist.”