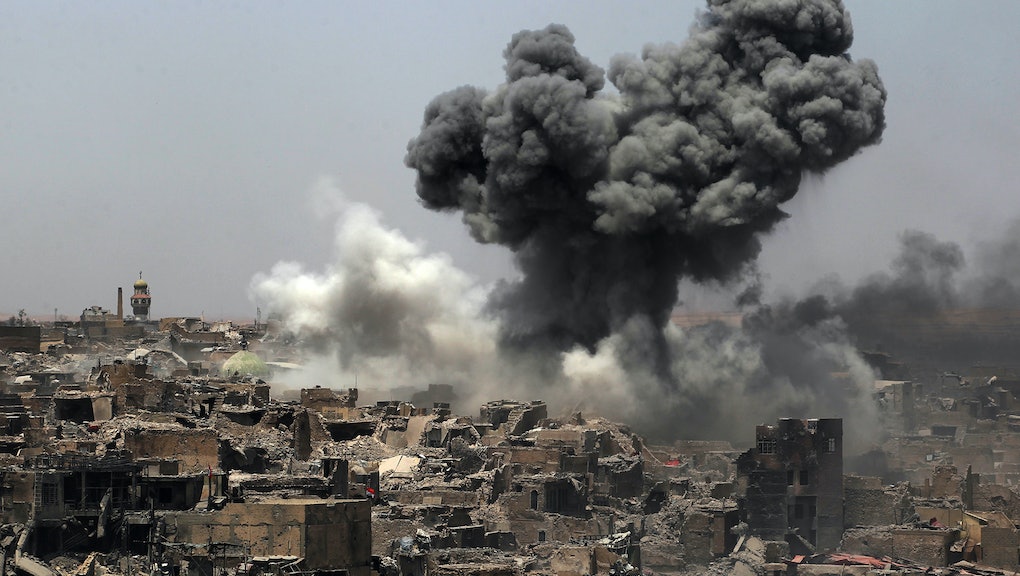 Abu Bakr al-Baghdadi is reportedly dead, but ISIS is alive and well

Three years after Abu Bakr al-Baghdadi climbed the steps of the Great Mosque in Mosul, Iraq, to declare himself the leader of a newly formed “caliphate” in Iraq and Syria, the extremist cleric and leader of the Islamic State is reportedly dead, according to the Syrian Observatory for Human Rights, and the figurative kingdom he helped to build is collapsing.

Russian state media had previously reported that al-Baghdadi had been killed in an airstrike in Raqqa, Syria, which came three weeks before Iraqi security forces declared victory over ISIS in Mosul.

But while the “caliphate” has been substantially weakened in Syria and Iraq, the political conditions that helped ISIS form in the region haven’t changed, and the group continues to build new outposts across the globe — leaving experts to warn that the radical Islamist group is far from being permanently eradicated.

The Islamic State is “kind of like a hydra,” Robert Ford, former United States ambassador to Syria and current fellow at the Middle East Institute, said in an interview. “It pops up in different places, it’s not particularly centrally commanded anymore, but different cells — whether in Asia or the Middle East, or West Africa — can communicate with each other, although it’s not so easy.”

Going forward, Ford said, “ISIS will still be around — it’ll just have a different form.”

ISIS is weakened, but not beaten.

On Monday, flanked by soldiers, Iraqi Prime Minister Haider al-Abadi formally declared victory over ISIS in Mosul — the city that had functioned as the group’s de facto capital for years.

“From here, from the heart of the liberated and free Mosul, by the sacrifices of the Iraqis from all the provinces, we declare the great victory for all of Iraq and Iraqis,” he announced.

In fact, ISIS has been buffeted by attacks on all fronts in recent months — not just by Iraqi forces, but by the American-backed Syrian Kurdish forces and by the Russian-backed Syrian government itself.

As the group continues to hemorrhage fighters and territory, Ford said, the inevitable conclusion is that it will be driven underground.

According to Renad Mansour, a fellow at the Middle East and North Africa Program at Chatham House, that insurgency would look like a “more asymmetrical, guerrilla-style warfare,” and would include more of the attacks that have become the hallmark style of ISIS: suicide bombings targeting civilians in major cities, car bombs and improvised explosive devices.

But at the same time ISIS is beating a hasty retreat from Syria and Iraq, the ideology that governs the group is stretching its tendrils into other corners of the globe.

“The Islamic State is still trying to spread in other parts of the world,” Ford said. “There’s been an uptick in activity in, for example, the Far East, in particular the Philippines, and then also West Africa.”

And while less money and fewer fighters is good news for ISIS’s foes, a more fragmented version of the terror group poses its own unique set of challenges.

“It’s harder to organize attacks in Western countries or the United States when you have fewer resources, but, on the other hand, the fact that it splinters and becomes smaller cells makes it harder to locate and eliminate those cells,” Ford said. “I think especially if they’re able to generate new recruits out of political discontent ... then we end up in this sort of perpetual insurgency. Forever war mode.”

Political discontent in the region will continue to fuel jihadi recruitment.

In 2011, ISIS was able to pick up steam and fresh recruits in Iraq after the country’s government forces began targeting Sunnis, under the direction of Shiite Prime Minister Nouri al-Maliki.

It was this type of sectarian agitation, Mansour said, that caused many Iraqis to feel like they were getting a raw deal under al-Maliki’s premiership — leaving them with no choice but to turn to alternative forms of governance.

“The Iraqis under ISIS, not foreigners but the actual tribes, and people from Iraq who gave their sympathies or oath to ISIS — it’s about the fact that the world that led to ISIS continues to exist,” he said. “There has been no effort made to tackle the problems that led to the emergence, which means this might be the end of the senior leadership of ISIS, but these populations will continue to have grievances.”

Mansour said that from the perspective of ISIS followers, “not much has changed” insofar as their discourse “will still paint Baghdad as an Iranian proxy state that’s looking to target Sunnis, and kind of creating this sectarian Shia opportunity.”

With those conditions, Mansour said, there will “always be a space for these types of groups like ISIS.”

But beyond the failure to address legitimate political grievances, there is the pull of a more malignant force: the radical ideology that fuels ISIS’s ongoing crusades, which can’t be smoked out with a bomb or surveilled by a drone.

Will the “forever war” continue?

Going forward, Ford said, one of the most important things to look at will be what’s left once the dust settles across the Levant — namely, the populations that Presidents Barack Obama and Donald Trump have both used to further their interests in the region, and the lasting impacts they’ve had on local populations.

“The tools that the Obama administration set up and the Trump administration has used are themselves guilty of a lot of human rights abuses to local populations, and that will probably ... help foster jihadi recruitment into the insurgency,” he said.

According to Ford, it’s these types of abuses that threaten to alienate local populations, stoking fear and fueling the insurgency endlessly.

“So are we backing the right people?” he asked. “Or are we backing people who are just going to keep generating jihadi recruitment and the forever war continues?”

Although U.S-backed forces will “almost certainly” retake the Syrian city of Raqqa, just as they have retaken Mosul, Ford said, “it doesn’t mean that the fighting ends — it just changes shape.”

“We’re more in a forever war situation than a ‘World War II, surrender on the decks of the Missouri in the Bay of Tokyo’ scenario,” he said.

“Are we backing the right people? Or are we backing people who are just going to keep generating jihadi recruitment and the forever war continues?”

Mansour echoed the idea that the fighting may slow ISIS’s efforts, but will ultimately be a weak defense against the steady creep of radical ideology.

“[ISIS will] paint this as small battle in the bigger war, and they’ll also paint this as a test from God,” he said. “It’s not easy to create what they perceive to be a caliphate, so, to them, this is very much a test, and it’s a smaller defeat in a much wider and more important kind of battle.”