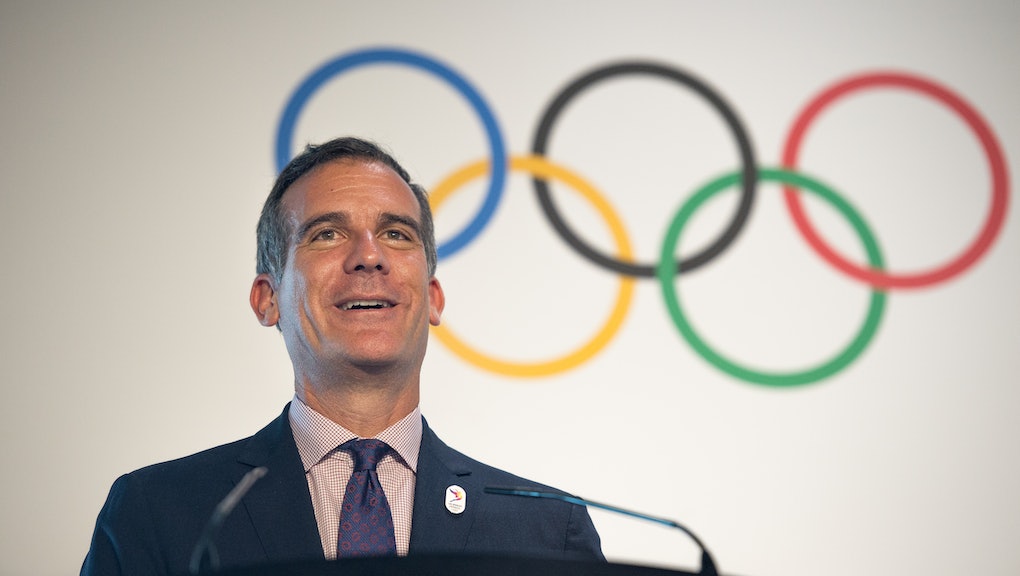 Trump wants LA to host the 2024 Olympics. Here’s how his travel ban could affect that.

Two days after the New York Times reported that Donald Trump Jr. met with a Russian lawyer during his father’s campaign after he was promised incriminating information on Hillary Clinton, President Donald Trump is tweeting about everything except the situation at hand.

Instead, his mind is on the Olympics.

Trump’s tweet came shortly after both Los Angeles and Paris presented their plans to host the 2024 Olympics to the International Olympic Committee early Tuesday in Switzerland. The IOC voted Tuesday to allow both cities to host the games — one in 2024, and one in 2028.

The IOC will ultimately decide on Sept. 13 in Lima, Peru, which city will play host to which games.

Trump has long pledged his support to LA’s potential Olympic bid, meeting with the president of the IOC at the White House in June and discussing plans for the U.S. to host the 2024 Games with Los Angeles Mayor Eric Garcetti in November 2016.

However, one of the president’s most controversial policies — his travel ban on six Muslim-majority nations — could pose a significant roadblock in convincing the IOC to hand the 2024 Olympics over to the U.S.

Members from each of the six countries competed in the 2016 Olympics and are expected to appear at the 2024 Games as well.

On June 26, the Supreme Court approved a version of the policy that would allow foreign nationals with a “bona fide relationship with a person or entity in the United States” to enter the country. This rendition of the ban is a milder version of Trump’s original two executive orders on the matter, but the Supreme Court will review the case for the full ban in October.

The White House has stated that a “bona fide relationship” includes those who are visiting or moving in with family, students accepted to American universities, workers employed by U.S. companies or lecturers invited to speak at American institutions.

The Trump administration’s definition of the Supreme Court’s instated policy does not specifically state whether or not Olympic athletes would be accepted, but the U.S. Olympic Committee told the Guardian in January that Trump said he would make exceptions for the athletes.

However, when asked how the ban could potentially affect Los Angeles’ chance of hosting the 2024 Olympics on Westwood One radio in February, Trump responded, “I don’t know.”

“But regardless we have to have security in our country,” Trump added, according to USA Today. “We have to know who is coming in; if people are coming in with bad intentions we need to know.”

Additionally, even before the Muslim ban came to be, some experts expressed fears that a Trump presidency would not bode well with IOC voters because of his “anti-Muslim, anti-Woman and anti-Latino” views, according to the New York Times.

“This is worse,” David Wallechinsky, an American member of the IOC’s cultural and heritage commission and the president of the International Society of Olympic Historians, said of the immigration ban. “I would consider it a blow to the Los Angeles bid — not fatal but a blow.”

The IOC refrains from commenting on politics as an organization, but the U.S. Olympic Committee released a statement to NBC Sports following the initial immigration ban executive order.