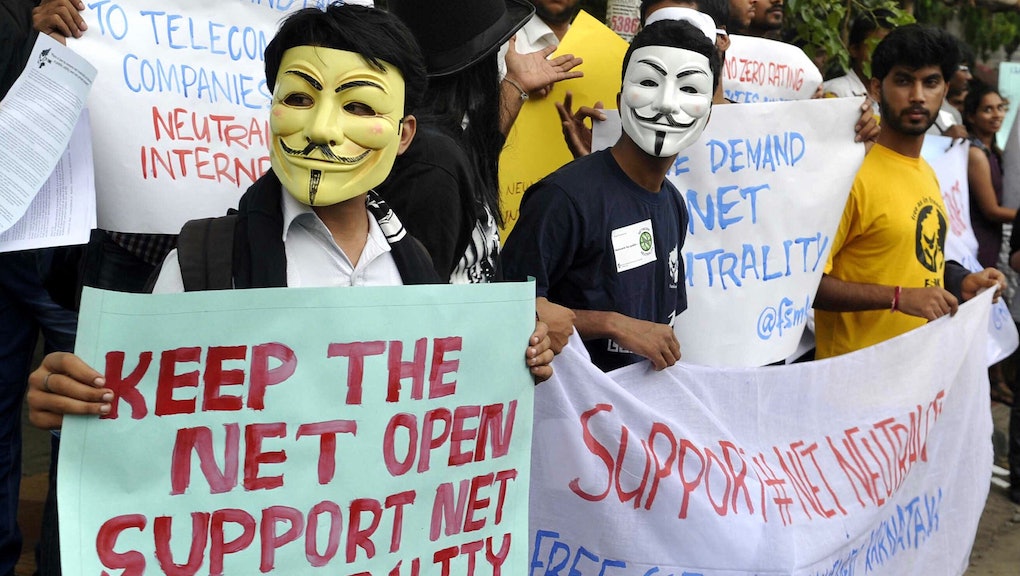 Net neutrality day of action: 5 websites explain why they’re waging a “battle for the net”

Hacking and “fake news” are far from the only threats to the future of a free internet. To hear the world’s largest websites tell it, everything you read, view and see online could be forever altered by a President Donald Trump-controlled regulatory agency.

Net neutrality rules could be rolled back in the next few months by the Federal Communications Commission. Those rules, implemented in 2015, ban companies that provide internet access from charging websites for more bandwidth. The regulation protects large websites, like Netflix, from paying more and prevents small websites who don’t pay fees to major internet providers like Comcast from loading more slowly.

Trump-appointed FCC commissioner Ajit Pai has begun the process to introduce a new policy that would abandon the 2015 rules. That move would let internet companies charge websites to maintain fast load times. Pai has argued the rules must be reversed to reduce government regulation of the internet.

Much of the internet argues the opposite, begging for the regulations to remain in place. With 80,000 websites participating, Wednesday will mark one of the largest online protests in history, according to a press release from Fight for the Future. Facebook, Google, Twitter, Netflix, Mozilla, Amazon, Airbnb and 80,000 additional websites will push U.S. internet users to run up the score against reversing the Barack Obama-era free internet rules.

Websites are posting videos, running ads on their homepages and sending push notifications to phones to encourage people to weigh in against the FCC proposal, which has drawn nearly 6 million comments since the end of April.

Net neutrality advocates argue that rolling back the rules mean websites that cannot afford to pay internet providers would be slowed down and ultimately driven to irrelevance, harming a free flow of ideas and information. New websites would never be able to find a sustainable audience, those advocates add, which would kill innovation on the web.

The day of action, coordinated by 6-year-old group Fight for the Future, was the product of recent grassroots energy online. Major players like Facebook only joined in the past week, with other large websites telling Mic they joined no more than a month ago. Representatives from five major websites — Mozilla, Vimeo, Imgur, Airbnb and Kickstarter — told Mic their companies would not have succeeded without net neutrality being in place from the birth of the internet.

“This is core to preserving the technology that made the internet so successful,” Michael Cheah, general counsel of Vimeo, said in an interview. Founded in 2004, Vimeo hosts videos that anyone can upload — and unlike YouTube, Vimeo does not run ads before videos. That’s good for creators, Cheah said, but deprives Vimeo of a revenue stream it might need if internet companies demand fees for the video bandwidth.

“That has a dampening effect on creativity, speech and dissemination of content,” Cheah said. “Net neutrality, at its core, does determine what kind of content gets out there.”

This debate is not a new one. Cable companies began pressuring streaming giants like Netflix in 2014 to pay more for the bandwidth their videos required. That led to the FCC announcing it would issue rules on net neutrality, a process that generated 3.7 million comments in 30 days. An analysis of the first 800,000 comments by the Sunlight Foundation found that fewer than 1% of those opposed the enforcement of net neutrality rules.

Earlier in 2017, the FCC announced it would begin a 90-day comment period on Pai’s proposal to roll back the 2015 net neutrality rules. According to Cheah, the first part of that comment period closes Monday and will close for good in August. The commission will issue their new rules after that.

“Our growth came from the ability to have a free and open internet,” Sarah Schaaf, vice president of community at Imgur, said in an email. The image-sharing website is among the internet’s top 50 websites, with 150 million monthly active users. Schaaf said she fears Imgur’s unique ability to find and promote images from across the internet will be hindered if net neutrality is thrown out.

Citing a poll from early June showing the vast majority of Americans support net neutrality, these websites are confident they can generate the public outcry necessary to stop the FCC from reversing the rule. That’s if they can break through the daily grind of Russia and health care stories, hence this day of action Fight for the Future hopes will reach millions of Americans.

And even if the FCC goes against the will of these websites, making sure public comments are submitted now will be key to future victories, advocates say.

“I absolutely understand the cynicism that can settle in and the view it doesn’t matter if you speak up ... (but) making sure support for the open internet rule is heard loud and clear will get us what we want in the end,” Michal Rosenn, general counsel at Kickstarter, said.

Rosenn said her crowdfunding platform would not have been successful without the free flow of information that lets creative projects on Kickstarter connect with small-dollar funders. A loss of net neutrality may lead to only projects that make money being successful online, as opposed to those that are most valuable for society, she said.

“For people who are just trying to get their ideas off the ground, they honestly, at this point, need (net neutrality) more than we do,” Rosenn said.