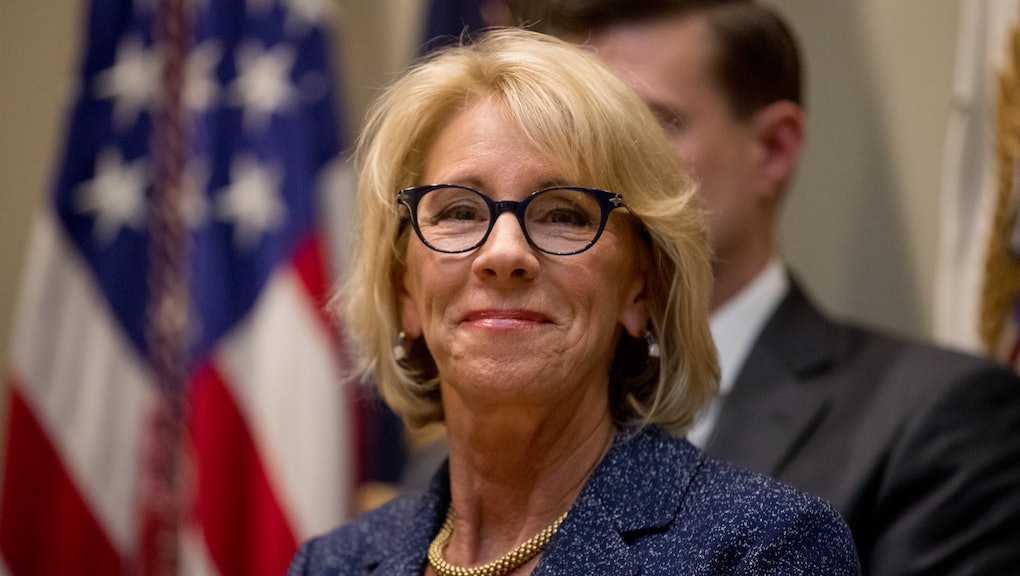 After her department signaled its intention to ease investigations into campus sexual assault cases, Education Secretary Betsy DeVos has reportedly agreed to meet with concerned parties on all sides of the issue — including men’s rights activists, who often subscribe to the belief that women lie about rape to bring down innocent men.

According to Politico, DeVos intends to hear from people who support the Obama-era interpretation of Title IX — which obligated colleges and universities that receive public funding to abide by certain standards in handling sexual assault reports — and from those who oppose it. She has invited a number of survivor advocacy groups to sit down with her, as well as some that are, for sexist reasons, unabashedly hostile to current Title IX guidance.

The latter camp reportedly includes SAVE: Stop Abusive and Violent Environments, which places a heavy emphasis on protecting the “falsely accused” (who are, by all accounts, a small group); Families Advocating for Campus Equality, another organization intent on clearing the names of the accused; and the National Coalition for Men, a men’s rights group that exists to combat what it sees as systemic discrimination against men, notably with respect to “domestic and sexual violence laws that neglect male victims and support false accusations.”

The NCFM — a fixture in the openly misogynist men’s rights movement since 1977 — is “dedicated to the removal of harmful gender-based stereotypes especially as they impact boys, men, their families and the women who love them,” according to its website. The destruction of harmful gender binaries and stereotypes is a laudable goal, but the subtext here is that it’s men who need liberation from women’s oppression, as opposed to the other way around.

NCFM founder Harry Crouch told the Pacific Standard that overturning “the men’s violence industry” ranked high among the NCFM’s priorities, so high that some of its chapters post names and photos of women who make rape reports. According to the Standard, the NCFM labels these women “false accusers” on the grounds that their schools or the authorities dismiss their claims.

The NCFM alleges that men are the real victims in the sexual assault conversation — and certainly, male rape victims exist, representing an approximate 1 in 10 reports. While the NCFM does present data to encourage the idea that men are disproportionately victimized by women, that data is taken out of context and selectively edited.

Statistically, women are more likely victims of sexual violence. According to the Rape, Abuse & Incest National Network, only 334 of every 1,000 rapes are reported to the police, or roughly 1 in 3. Of those reports, about 57 lead to arrests, 11 go to court, seven garner convictions and six end in incarceration.

False rape reports are often said to comprise maybe 2% to 10% of all reports, and although it’s impossible to know what the actual figure is, it makes sense the number would be low: Falsely reporting a crime is itself a crime, and sexual assault survivors often face backlash when coming forward — hell, they might even find their personal information published on a forum for vigilante men operating on a biased scale of justice.

The NCFM is not among the men’s rights activism groups the Southern Poverty Law Center lists as hate groups — although SAVE is. And as Think Progress reported, both groups promote precisely the same flavor of damning anti-woman rhetoric. Take for example this SAVE report arguing that laws against domestic violence threaten the right to familial privacy. This is particularly bad for women, who are overwhelmingly the victims of domestic and intimate partner crime, and often reluctant to report.

DeVos appointee Candice Jackson — head of the Office for Civil Rights, which oversees Title IX enforcement — circulated a memo in June that announced a loosening of the guidelines that hold schools to thorough sexual assault investigations. As Politico reported, DeVos hasn’t formally toppled those guidelines. But it’s not exactly heartening that, to help her make that decision, she’s called in a group of people who manipulate information to advance a false narrative about the “real” victims of the sexual assault epidemic.

She’ll also hear from survivor rights groups including Know Your IX, End Rape on Campus, SurvJustice, the National Women’s Law Center and the National Center for Transgender Equality. And as a rule, it’s good to weigh both sides of an argument before tendering a verdict, especially one that will have very real consequences for all genders. With that in mind, it’s probably best not to place equal (or any) value on the opinions of a recognized hate group and its ideological twin.